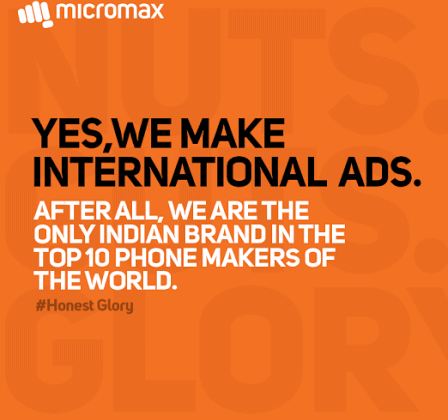 World Honesty Day acknowledges the daring spirit of people who believe in saying what they think, instead of saying what they think they should say. This trait is in sync with Micromax’s post-brand refresh brand ethos, ‘Nuts. Guts. Glory’ – and being nuts enough to speak one’s mind takes guts, and wins one #HonestGlory.

Thus this World Honesty Day, Micromax lived up to its spirit of being nuts enough to go honest about itself on Twitter with its campaign #HonestGlory. Tweeting about how they’re mocked at for launching countless phones every week, Micromax replied that they do so because they want their followers to have a wide variety of smartphones to choose from. The message also conveyed the fact that Micromax comes up with budget-sensitive as well as flagship phones. This stems from the fact that Micromax is an inclusive brand and is proud of the same.

The campaign reflects the brand’s vision to be transparent and engage users in a way that connects with them. ​For instance, making international TVCs cuts it for them because they are the only Indian brand in the top 10 smartphone makers of the world. The conversation was well received by Micromax’s fans, who acknowledged the conversation through enthusiastic responses.

Through this campaign which has been conceptualized and executed by Interactive Avenues Pvt. Ltd, the brand is building a higher level of trust amongst its fan and customer base.

Experiencing Sleepless Nights? It May be Due to High EMF in Your Bedroom

By: Manas Ganguly, Founder, Brightsandz CleanTech In the last two decades, innovation in technology has led…