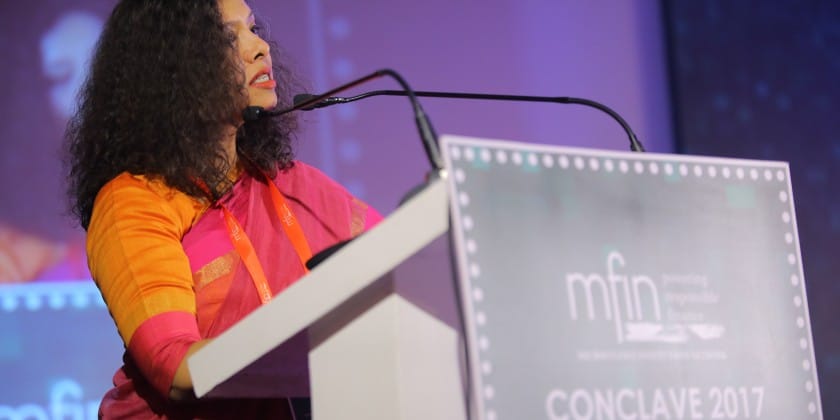 Microfinance Institutions Network (MFIN), a self-regulatory organisation and industry association of the microfinance industry in India, launched a financial literacy mobile app for microfinance clients. The launch witnessed the presence of Meenakshi Lekhi, Member of Parliament along with Manoj Mittal, Deputy Managing Editor, SIDBI and marked the inauguration of the two-day conclave. ‘Microfinance in Asia – A Mosaic’ is India’s first bespoke international conclave focused on microfinance.

Speaking at the launch Ms Ratna Vishwanathan, CEO, MFIN said, “Microfinance has played an important role in providing access to easy finance to underbanked and unbanked population from low income households in the country. While micro credit has contributed in improving microfinance beneficiaries’, especially women’s, financial and social status, it is also crucial that they are aware of their rights and importance of practicing responsible borrowing. Improving financial literacy in this segment is absolutely necessary to avoid the danger of over indebtedness. Keeping this in mind, we are launching a multi lingual financial literacy app which will act as a guide and ready reckoner for them.” The financial literacy app has been released on Android platform and will be available in six languages including Hindi, Marathi, Telugu, Tamil and English. It is aimed to help them in understanding dynamics involved in microfinance including credit history, interest rates, repayment cycles and their rights as a borrower.

Speaking about the app Vishwanathan further added,” The app has different literacy modules with audio-visual elements for easy understanding and is designed to work in even low connectivity areas. We hope that through this app we are able to impart financial literacy to microfinance beneficiaries across regions so that they are well informed while availing micro credit.”

The emphasis of the discourse during the conclave is on low cost, high value interventions for vulnerable households through innovation, whether through better banking processes, digital innovation or the more ubiquitous telco route. The platform is aimed at facilitating exchange of ideas and business practices while serving the larger purpose of empowering the grass root level and financial inclusion.

To address the amorphous structure of employees across the microfinance industry, Microfinance Institutions Network (MFIN),…

MFIN to organise “Microfinance in Asia – A Mosaic”

Microfinance Institutions Network (MFIN), a self-regulatory organisation and industry association of the microfinance industry in…