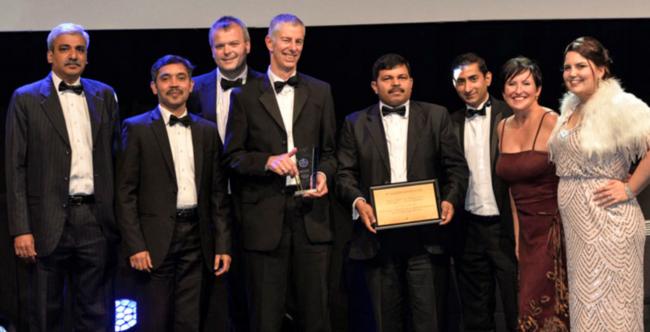 Maveric Systems, a provider of IT Lifecycle Assurance with a strong focus on the Banking and Telecom sectors, has won the award in the ‘Best Test Automation Project – Functional’ category, jointly with Metro Bank, at The European Software Testing Awards 2016.

The fourth annual European Software Testing Awards 2016 took place on 16 November 2016 at the magnificent Old Billingsgate in Central London, celebrating industry-leading practices in software testing and Quality Assurance. This is Maveric’s first win and third nomination to the finalist list over the last four years, competing with global players.

Maveric’s joint entry with Metro Bank focused on how the Quality Assurance (QA) for Metro Bank’s revamp of its existing internet banking platform for commercial customers, was completely automated against the backdrop of the semi-agile development model and aggressive go-live timelines. With the primary QA strategy in the project revolving around effective use of Maveric’s homegrown test automation framework, automated test suite using open-source tools & implementation of continuous integration & regression, the focus was not only directed on delivering seamless end-to-end digital assurance, but also deriving a return on investment on automation.

“Our new Commercial Internet Banking platform is a real game changer for our customers, so we were eager to make it available as quickly as possible. The test automation suite designed and implemented by Maveric meant that we could significantly reduce the time required for each test cycle. It’s helped us to ensure quality standards remain high, while rapidly delivering exciting new features”, said Jim Cameron, Head of Testing, Metro Bank.

Entrants were judged on the basis of the best use of automation in a software testing project, the utilisation of a well-developed test suite of testing scripts, resolution of technical problems, effective utilisation of a best practice method/technique, successful outcomes and commitment to high quality and standards.

Commenting on the accolade, Ranga Reddy, CEO – Maveric Systems said, “Maveric’s domain-led approach has always enabled us to understand business needs and align them with the technology adoption and base our test strategies on the same. Winning the award at TESTA for the Best Functional Automation is a great recognition of our efforts and will indeed be a boost to further future endeavors.”