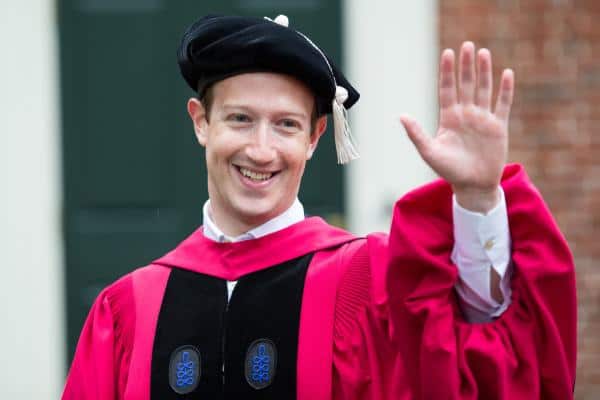 Twelve years after dropping out of Harvard, Facebook CEO Mark Zuckerberg returned to campus to pick up honorary doctor of law degree. He delivered commencement speech that expressed his vision of purpose of life. He encouraged the graduating students not to underestimate the impact of small actions and importance of working towards a greater good.

Zuckerberg said in a statement “When our parents graduated, purpose reliably came from your job, your church, your community. But today, technology and automation are eliminating many jobs. Membership in communities is declining. Many people feel disconnected and depressed, and are trying to fill a void.”

He said that this generation will deal with the job cuts that will be brought about automation in sectors like car. “This is the struggle of our times: The forces of freedom, openness and global community against the forces of authoritarianism, isolationism and nationalism. This is not a battle between nations, it’s a battle of ideas” he added.

Zuckerberg asked students to find a purpose in life and work towards it to achieve their goals. “In our generation, the struggle of whether we connect more or achieve our greatest opportunities comes down to your ability to build communities and create a world where every single person has a sense of purpose.”

In the coming years most of the jobs will be taken by automation, Zuckerberg ask young people to work on public works projects to make new jobs. He just gave the idea and he didn’t specify what sorts of projects those should be.

“To keep our society moving forward, we have a generational challenge – to not only create new jobs, but create a renewed sense of purpose,” he said. “So what are we waiting for? It’s time for our generation-defining public works. Let’s do big things, not only to create progress, but to create purpose” he added.

According to Zuckerberg this is hard because the world is changing quickly and the things that used to give people purpose, like their jobs or their real-life communities, are changing, too.

Zuckerberg is the youngest personality who followed another famous Harvard dropout, Bill Gates, who spoke before its graduates a decade ago. Zukerberg said “If I get through this speech today it’ll be the first time I actually finish something here at Harvard,”