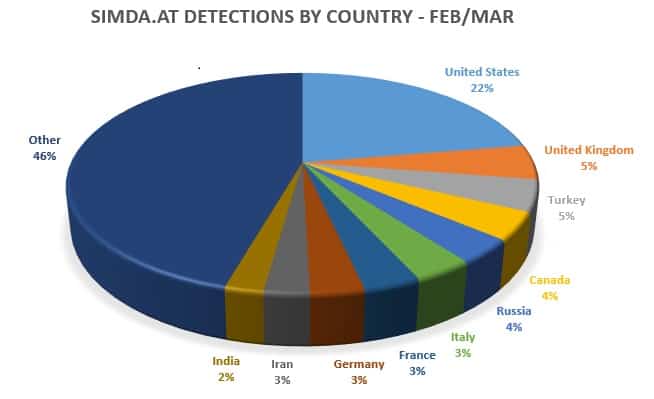 In a global operation coordinated by the INTERPOL Global Complex for Innovation in Singapore, a group of leading IT companies including Kaspersky Lab, Microsoft, Trend Micro and Japan’s Cyber Defense Institute, in collaboration with law enforcement agencies, have disrupted the Simda criminal botnet – a network of thousands of infected PCs around the world.

In a series of simultaneous actions on Thursday 9 April, 10 command and control servers were seized in the Netherlands, with additional servers taken down in the US, Russia, Luxembourg and Poland. The operation involved officers from the Dutch National High Tech Crime Unit (NHTCU) in the Netherlands, the Federal Bureau of Investigation (FBI) in the US, the Police Grand-Ducale Section Nouvelles Technologies in Luxembourg, and the Russian Ministry of the Interior’s Cybercrime Department “K” supported by the INTERPOL National Central Bureau in Moscow.

This is expected to significantly disrupt the botnet’s operation. It will increase the cost and risk for cybercriminals intent on continuing their illegal business and will prevent victims’ computers from participating in malicious schemes.

Information and intelligence is now being gathered in order to identify the actors behind the Simda botnet; the people who applied to their criminal activities the business model of charging affiliate partners.

“This successful operation highlights the value of, and need for partnerships involving national and international law enforcement and private industry in the fight against the global threat of cybercrime,” said Sanjay Virmani, Director of the INTERPOL Digital Crime Centre.  “The operation has dealt a significant blow to the Simda botnet.  INTERPOL will continue its work to assist member countries in protecting their citizens from cybercriminals and to identify other emerging threats.”

“Botnets are geographically distributed networks and it is usually a challenging task to take down such a thing. That’s why the collaborative effort of both private and public sectors is crucial here – every party makes its own important contribution to the joint project. In this case, Kaspersky Lab’s role was to provide technical analysis of the bot, collect botnet telemetry from the Kaspersky Security Network and advise on takedown strategies,” added Vitaly Kamluk, Principal Security Researcher at Kaspersky Lab, and currently on secondment to INTERPOL.

As a result of the disruption operation, command and control servers used by criminals to communicate with infected machines have been shut down. However it’s important to note that some infections are still in place. In order to help victims to disinfect their PCs, Kaspersky Lab has created a special CheckIP website. Here, users can find out if their IPs have been spotted on Simda command and control servers, signifying the possibility of active or past infection. These IP addresses became available as a result of the server takedown operation.

If a user’s IP is recognized, it doesn’t necessarily mean that the system is infected – in some cases one IP address might be used by several PCs on the same network (for example, they could be connected to one Internet service provider). However it makes sense to double-check and scan the system with a comprehensive security solution, including the free Kaspersky Security Scan or a trial version of Kaspersky Internet Security.

To check if your system is a part of a Simda botnet go to https://checkip.kaspersky.com

To learn more about Simda botnet disruption go to Securelist.com