JioFiber plans may not be as disruptive as was being expected, but the connection is apparently still being installed at no additional charges apart from the one-time security deposit of Rs 2500. Although there is no clarity as to until when the services will be offered to new and existing users for free, the JioFiber data connection currently does seem to be available at no cost.

A blogger from Bangalore, whose Twitter handle is @iVenpu, has shared his experience with the JioFiber network and he says that he is quite satisfied with it. “Got JioFiber at home today.. Morning 10 AM, salesperson came, 5 minutes to sign-up and payment. in an hour’s time service executives came and installed. From starting of sales trans to getting wifi connected in 3 hours flat.. Nice speed.. clean work too.. happy (sic),” he says. 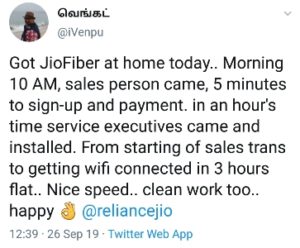 He also claims that the services were installed after paying a onetime fee of Rs 2500, and he is getting data at the speed of 100MBPS per month. He also shared that Jio officials approached him themselves and asked if he was interested in the services. 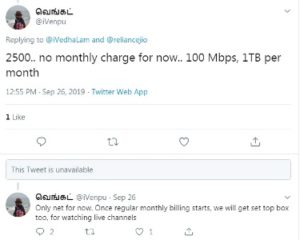 The same has been confirmed by another user on Twitter, and several existing customers from Delhi. “As of now all that they have said is we will be getting a landline connection soon. While installing they had said data will be free for few months. They have not contacted us about the new plans or asked us to start paying,” says an existing customer to DataQuest from New Delhi who does not wish to be named.

JioFiber Data Free as of Now, DTH after Regular Billing Starts ‘At No Extra Cost’

One of the things that lacked clarity when JioFiber plans were announced was if users would have to pay extra for the DTH or cable TV connection. However, customers may be able to enjoy television services along with the regular data plans at no extra cost. “Only net for now. Once regular monthly billing starts, we will get the set-top box too, for watching live channels,” shares @iVenpu on Twitter.

Customers will get all services through data and the Jio 4K set-top box will provide live TV channels live using JioFiber, he adds. The user also says that the Jio officials while installation said that around 640 channels will be offered without any charges apart from the broadband charges including the landline connection.

The official Jio website also currently maintains that the Preview Offer still holds good. “The current offer is JioFiber preview offer which gives you ultra-high-speed internet up to 100Mbps free for a Limited Preview Period and a complimentary access to a host of Jio’s premium apps. In case, you consume your data quota you can continue to enjoy our high speed internet services by performing a complimentary data top-up of 40 GB via MyJio App or through Jio.com. As this is a preview offer, there are no installation charges levied but there is a refundable security deposit of Rs 2,500 taken for the ONT device (JioFiber Router). This amount needs to be paid through Debit card, Credit Card, Jio Money or Pay TM,” says the website.

All that is said, more clarity on the current JioFiber plans, and the DTH services will only unfurl in the days to come. Reliance Jio has made no official statements or announcements after the JioFiber plans were rolled out last month.

Also Read: Jio Fiber Connection: Here’s Why the Services are Still not Available to Some Users

Posted by: DQINDIA Online
View more posts
JioFiber Connection Currently Free, DTH Connection Coming Soon: Users 3.8571428571429 out of 5 based on 7 ratings. 7 user reviews.
AI and Security: Wait, on whose side does it stand?
JioFiber Connection: Here’s Why the Services are Still not Available to Some Users