Jio Wi-Fi Calling is now being used by millions of users across several circles in India. The service, which was officially launched on 8 January 2020, is now available in Mumbai as well. Reliance Jio is now working with handset manufacturers to make the Jio Wi-Fi Calling facility available on more devices.

While the Jio Wi-Fi Calling service was compatible with 150 handsets when it was launched earlier this month, a few more compatible smartphones have been added to the list of supported devices on the official website. Here is a list of the latest devices that now support the VoWiFi service.

Jio Wi-Fi Calling is free of cost and now enables voice and video calls to seamlessly switch-over between VoLTE and Wi-Fi to provide an enhanced voice or video-calling experience on these devices as well:

The list of other supported devices have been provided here.

Will Jio Wi-Fi Calling Be Made Available on OnePlus Smartphones?

While the service has been rolled out in various circles, Jio Wi-Fi Calling is currently unavailable on OnePlus handsets. “What wifi calling feature is not enabled on OnePlus devices. There is a huge chunk of users using OnePlus devices but non of the devices are supported by Jio. I am really surprised. You are supporting some unknown brands but not OnePlus,” says Uday Parikh on Twitter. 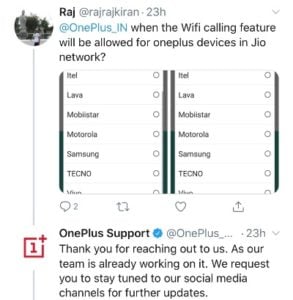 Reliance Jio has replied saying “We’ve got you covered! Currently your device is not compatible. However, we have taken it up with the device manufacturer.” The official account of OnePlus Support also has responded to a similar query saying that while they had no official confirmation regarding the issue they are currently “working on it”. 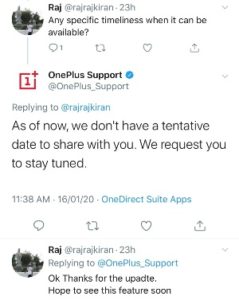 “Thank you for reaching out to us. As our team is already working on it. We request you to stay tuned to our social media channels for further updates,” says the official OnePlus Support account. Furthermore when the consumer requested for a timeline on when the Jio Wi-Fi Calling feature would be available on OnePlus handsets, the account responded saying “As of now, we don’t have a tentative date to share with you. We request you to stay tuned.”

Posted by: DQINDIA Online
View more posts
Jio Wi-Fi Calling Now Compatible with Few More Devices, May Be Made Available on OnePlus Handsets Soon 0 out of 5 based on 0 ratings. 0 user reviews.
5 key content tools that are driving PR
Hosting applications in the cloud for business agility