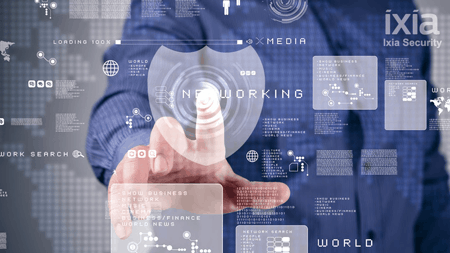 With a combined 20 years of insights as the industry’s provider of network and network security testing along with Ixia’s understanding of large scale network data distribution systems, Ixia’s security researchers provide an extensive analysis of an organization’s network attack surfaces. While increases in malware are clearly a major threat to both enterprises and service providers, network complexity is creating its own vulnerability. The average enterprise is using six (6) different cloud services, network segmentation is increasing yet 54% of enterprises are monitoring less than half of them, and less than 19% of companies believe that their IT teams are adequately trained on the wide array of network appliances they are managing.

“Organizations need to constantly monitor, test and shift security tactics to keep ahead of attackers in the fast-paced threat landscape we all deal with today. This is especially important as new cloud services and increased IoT devices are routinely being introduced,” said Marie Hattar, chief marketing officer (CMO) at Ixia. “To do this effectively, organizations must start by studying their evolving attack surface and ensure they have the proper security expansion measures in place. Simple but effective testing and operational visibility can go a long way to improving security.”

Gaining access to accounts is often done the old-fashioned way—brute force guessing starting with the obvious. It is shocking how many network accounts and devices contain default usernames and passwords. At the top of the list were usernames like “root” and “admin,” but also “ubnt,” which is the default username for AWS and other cloud service offerings that use Ubuntu. IoT was also a notable target with “pi” for Raspberry PI. The passwords topping the list included favorites like “admin,” “123456,” “support” and “password.”

Top Exploited URI Paths and CMS
In computing, a uniform resource identifier (URI) is a string of characters used to identify a name of a resource, which can be interacted with via the web using specific protocols. The top exploited URI paths used for brute force WordPress logins were /xmlrpc.php and /wp-login.php. Across customers, Ixia’s ATI Research

Center also saw many attempts to scan for the phpinfo() function and that most URIs attempted for attack were PHP based.

Malware of Phishing?
Malware continued to dominate over 2016 but there were a few months — namely June, July, and August — during which ransomware phishing appeared to have outpaced malware. Top fishing targets included Facebook, Adobe, Yahoo! and AOL logins. Adobe updates were the most prevalent drive-by updates for delivering malware or phishing attacks.

“Understanding your network breadth across physical, virtual, and cloud assets is critical to protecting it,” said Jeff Harris, VP of solutions marketing at Ixia. “We see that network segmentation adoption is on the rise but up to half of those segments are not being monitored. Network visibility into every segment, IoT monitoring, and AI will be some of the key security topics in 2017.”