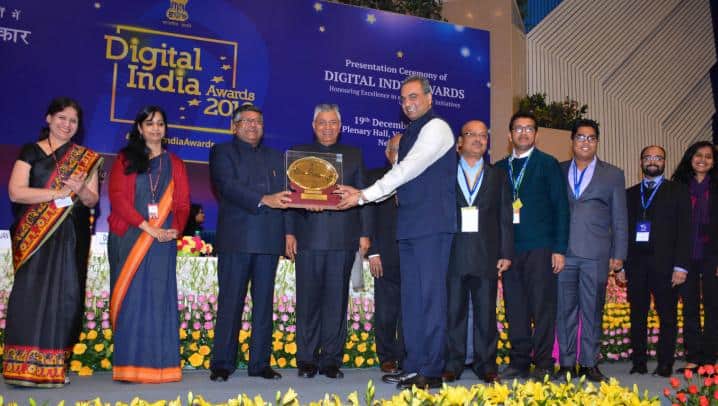 In order to promote more innovative e-governance initiatives by the government entities Digital India awards, earlier known as the Web Ratna Awards, were instituted under the Ambit of National Portal of India. The award acknowledges exemplary initiatives of various government entities in the realm of e-governance. Web Ratna awards were biennial awards and the previous three editions of the awards were held in the years 2009, 2012 and 2014.

Speaking at the occasion, Shri Ravi Shankar Prasad, , “India is sitting at the cusp of a digital revolution, and I want India to be the leader in this revolution worldwide. Citizens are willing to change with the evolving technology. I appeal to every countryman to be the agent of this historic transformation.”

“The Government is working towards the concept of Digital Villages. To start with, we would like to enable 100 such villages with virtual world facilities in the field of infrastructure, education and healthcare” Shri Ravi Shankar Prasadrevealed at the event.

Complementing the efforts of NIC, Shri P. P. Chaudharysaid, “Digital India is the flagship initiative of the Government led by the Prime Minister Shri Narendra Modi, and I must congratulate NIC for instituting this award for the architects of the digital transformation of the country and to the participants as well for their relentless work towards this digital revolution.I am sure today’s awards will inspire all of us to strive harder and work towards making a Digital India a success.”

Congratulating the winners Ms. Aruna Sundararajan, Secretary, MeitYsaid, “The first ever Digital India Awards is indeed a milestone for all of us. I would like to congratulate all of you who have been doing pioneering work in the Digital India programme to bring about a digital transformation in India.”

“I am happy to share with you a historic milestone that we have achieved couple of days ago. The volume of digital transaction in India has crossed 1000 crores in 2016, which only indicates the speed and scale at which digital governance and digital transformation is taking place across the country.” highlighted Ms. Sundararajan.

Considering the vision of Digital India and acknowledging the fact that citizen are now accessing government information and services through medium other than the web the scope of the Web Ratna awards was broadened to include these initiatives also. Consequently three new categories of awards were introduced and the awards themselves were rechristened as Digital India awards to reflect this vision. Digital India Awards 2016 have been constituted under the following eight categories:-

The Award facilitates those ICT based services by a Government Department (Central/State) which have displayed exemplary citizen focus, reach and innovation. The service should have effectively contributed to enhancement in efficiency, productivity as well as in imparting transparency and accountability in the governance process. The entries are expected to display service maturity and the convenience provided to the citizen for availing the services.

In a democratic system, citizen participation is one of the key components of decision making process. This category invites initiatives taken by Government entities which have leveraged the use of ICT to solicit active engagement of public in the process of governance. The entries are expected to display relevance of context, multiple modes of participation, involvement of stakeholders and innovative use of ICT, both for response acquisition as well as for analysis of inputs received.

The Award felicitates a Ministry or Department of the Government of India which has a comprehensive web presence and display the level of accountability in terms of quantity, quality, spectrum of coverage, and innovation ascertaining user satisfaction. Level of convenience provided to the citizen for availing the services, usability and accessibility are also assessed.

The Award aims to acknowledge the State/UT of India for displaying exemplary initiative in establishing comprehensive web presence and display the level of accountability in terms of quantity, quality, spectrum of coverage, and innovation ascertaining user satisfaction. Level of convenience provided to the citizen for availing the services, usability and accessibility would also be assessed.

To reward the accomplishments of the District administration which has displayed exemplary focuses on providing online services and information to the citizens? Entries must display the level of convenience provided to the citizen for availing the services in terms of accessibility, quantity, service maturity and spectrum of coverage in order to ascertain user satisfaction.

The Award aims to felicitate outstanding Local Body initiative with a focus on providing exemplary information quality and extent of services provisioning by assessing the service maturity level, service catalogue, transparency, cost effectiveness and efficiency enhancement in terms of service delivery. The initiatives are also assessed on the level of convenience or empowerment provided to the citizen through the initiative.

India is going mobile. More people today are accessing the internet on their phone than ever before. The Award aims to honour the Best Mobile App launched by a Government entity. Nominated app should have well designed and intuitive mobile interface. The entry should also display ease of use and personalisation features. Usability, content organisation and availability on multiple platforms are considered. Back end dashboards and analytics functionality are desirable.

To acknowledge proactive release of resources(datasets/apps) in an Open/Machine readable format, on the Open Government Data (OGD) Platform (http://data.gov.in), by the ministries/ depts./ organizations/ states in compliance with the National Data Sharing and Accessibility Policy (NDSAP). The selection criteria includes overall consumption of resources by public at large with respect to their ratings, views, downloads etc. Potential usage of such datasets for development of Apps to deliver citizen services innovatively is an added advantage.

Awards were announced earlier this year and online nominations were called from government entities through the awards website http://digitalindiaawards.gov.in. An overwhelming response was received for all eight categories from across the country with over 500 nominations. Extensive process for evaluation of filed nomination was followed which was conducted in two stages. In the initial stage entries were screened based on a scientifically formulated evaluation matrix which was specifically designed for each category of Digital India Award. The distinguished Jury under the Chairmanship of Secretary, Ministry of Electronics and Information & Technology comprising senior members from government, academia and industry there after reviewed the shortlisted nominations and finalised the awardees in each category. Three awards Platinum , Gold and silver will be presented in each category. A total of 28 entries have been selected to receive the awards.

Shri P. P. Chaudhary also formally launched the Government Services Portal https://services.india.gov.in/at the Digital India Awards 2016, which has been developed with an objective to enable a single window access to services being provided by the various Indian Government entities.