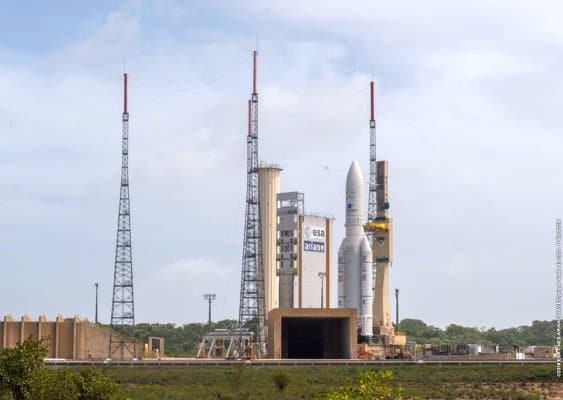 It almost feels like the Indian Space Research Organisation is on a mission launching spree as ISRO is all set for the launch of its third mission within a span of one month. The heaviest satellite ISRO has ever built, India’s giant geostationary communication satellite GSAT-11, is all set to take off at 2:07 am IST tomorrow. ISRO fans would not mind burning midnight oil to watch the launch therefore as usual, those interested can watch ISRO GSAT-11 launch live.

“Countdown began at 13:14 (IST) for the launch of GSAT-11 on-board Ariane-5 VA246 from Kourou Launch Zone, French Guiana today. The launch is scheduled at 02:07 (IST) tomorrow” says a tweet from ISRO’s official handle.

Since ISRO has always played a significant role in establishing a strong communication infrastructure within the country, the GSAT-11 mission is expected to further contribute in doing the same. The estimated Internet users have reached 450 million in India, and the country’s geophysical and climatic features are highly diverse, says a video released by PIB India. Therefore, the provision of broadband connectivity to every part of India has become imperative, conveys the video.

In today’s era, satellite based broadband connectivity that combines voice, data and video streaming holds immense potential and will be a game changer, adds the video. “this satellite will meet most of the requirements of providing broadband connectivity to rural and inaccessible gram panchayats under BharatNet Project, which is part of the digital India program initiative of Government of India,” says Dr K Sivan, Chairman, ISRO.

The GSAT-11 has mission life of about 15 years, hence a large communication satellite like this can be used to connect smart cities. Apart from enabling broadband, telecommunication and multi-media solutions to households, businesses and public organisations, the satellite is also capable of enabling in-flight connectivity. The satellite can also apparently support high data rate services across the country.

GSAT-11 will be launched from the European spaceport in French Guiana onboard Ariane flight VA246, as s ISRO’s own Geosynchronous Satellite Launch Vehicle Mark III (GSLV Mk III) rocket can only lift a satellite weighing not more than four tonnes to Geostationary transfer orbit.

ISRO always streams their satellite launches for the benefit of users who take pride in ISRO’s accomplishments. Those willing to stay up and watch the GSAT-11 launch live online need to only log onto ISRO.Gov.in at 2:00 am IST on 5 December 2018. Viewers can also watch the mission launch live on DD National and its live YouTube link.