A fresh update on the ISRO Chandrayaan 2 states that there will be a total of 14 payloads, of which 8 will be on the orbiter, 3 on the lander, and 2 on the rover; 13 payloads will be Indian, while one will be a passive experiment from NASA. 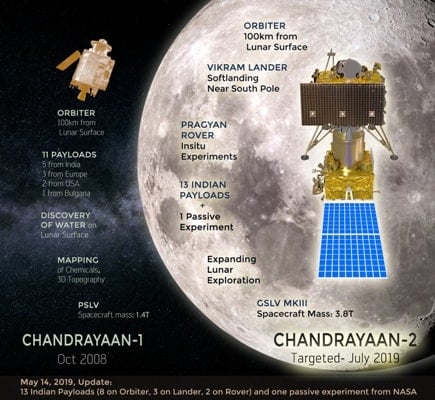 In the previous update, ISRO had revealed that all 14 payloads will be Indian and will be supplied by Indian Institutes such as: Large Area Soft X-ray Spectrometer (LASS) from ISRO Satellite Centre (ISAC) and Solar X-ray monitor (XSM) from Physical Research Laboratory (PRL). Various other ISRO centres such as Space Application Centre (SAC), IIRS, SPL, and LEOS for the ISRO Chandrayaan 2 lunar mission.

There is no official word yet from ISRO on what the payload from NASA will be, but various media reports had earlier mentioned that ISRO Chandrayaan 2 mission will carry laser reflector arrays from NASA, which will allow scientists take measurements of the distance to the moon. The instrument would also be able to precisely mention the location of the lander on the surface of the moon.

Apart from the passive experiment from NASA, the rover Pragyan which has been has three subsystems developed by IIT Kanpur to provide it mobility, will be carrying out scientific experiments on the lunar surface. . If successful, ISRO Chandrayaan 2 will be the first mission to land a rover near the lunar south pole. India will become only the fourth country to achieve this feat after US, USSR and China.