Anonymous employees of the IT major Infosys have made a shocking revelation that the chief executive officer (CEO) Salil Parekh and chief financial officer (CFO) Nilanjan Roy of the company had “asked them” to show more profits in the treasury by “taking up risks” and “make changes to policies”. The letter dated 20 September 2019has apparently been submitted to the board of Infosys Limited and the US Securities and Exchange Commission (SEC) by an anonymous group called ‘Ethical Employees’, according to media reports.

This development has come to light just a week after Infosys announced double digit growth for the fourth consecutive quarter, coupled with 1.2% operating margin expansion in Quarter 2. “Our performance was robust on multiple dimensions – revenue growth, digital growth, operating margins, operational efficiencies, large deal signings and reduction in attrition. All these are clear signs that we are progressing well in our journey of client-centricity and maximizing value for our stakeholders,” said Salil Parekh, CEO and MD, at the time.

According to the letter by ‘Ethical Employees’, which is now being shared on social media, CEO Salil Parekh allegedly said that “no one in the board understands these things, they are happy as long as the share price is up. Those two Madrasis (Sundaram and Prahalad) and Diva (Kiran) make silly points, you just nod and ignore them”. The group has also written in the letter that they have voice recordings to prove the same. 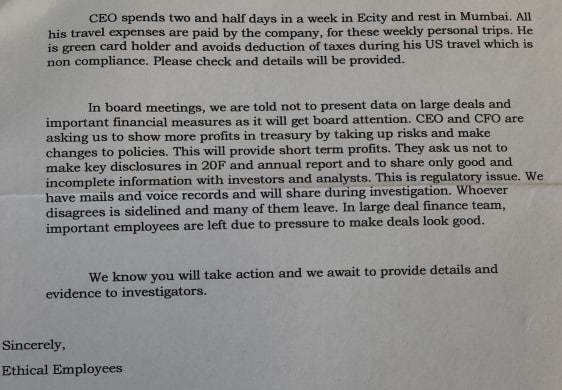 The shocking letter also goes on to state that “in large contracts like Verizon, Intel and JVs in Japan, ABN Amro acquisition, revenue recognition matters are a force, which is not as per accounting standards.” While more details on the matter are awaited, Infosys has issued a statement saying “The whistleblower complaint has been placed before the Audit Committee as per the company’s practice and will be dealt with in accordance with the company’s whistleblowers’ policy,” according to The Hindu BusinessLine.

Posted by: DQINDIA Online
View more posts
Infosys CEO, CFO asking us to show more profits in treasury: Ethical Employees 0 out of 5 based on 0 ratings. 0 user reviews.
Artificial intelligence, digital marketing, and design thinking to be top skills to drive future growth: Survey
Constitutional Rights and Consumer Choice on the Internet The Dialogue

Udacity announced the launch of its new Nanodegree program: Intro to Machine Learning with TensorFlow.…

Paytm Payments Bank (PPB), in a series of meetings with officials from the Telecom Regulatory…

ISRO NaVIC on Indian Smartphones: Apart from Providing Navigational Services How the Platform will Benefit People