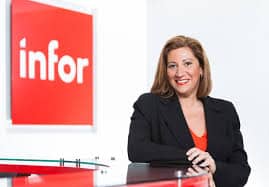 Infor, the provider of industry-specific cloud applications, announced the promotion of Helen Masters to senior vice president and general manager, Asia-Pacific. Based in the company’s regional hub in Singapore, Masters will be responsible for Infor’s business across ASEAN, Australia, Greater China, Korea, and New Zealand.

“Over the last 7 years, Infor has spent more than $3 billion dollars in R&D and developed the first set of mission-critical, industry-specific business applications in the cloud,” said Stephan Scholl, President of Infor. “The company is poised for accelerated growth in Asia-Pacific, and Helen Masters has proven herself as the right leader to deliver this growth. I am especially pleased to announce her promotion as the company’s first female geo lead.”

Masters has quickly ascended the ranks to become the first female to lead a major region at Infor. In 2016, three years after being hired as VP of the ASEAN region, Masters was promoted to Vice President, ASEAN and the Pacific, which includes Australia and New Zealand. During her tenure in this role, Infor’s business across the region grew considerably, as Masters took advantage of new developments at Infor including Infor CloudSuite, Infor Birst Analytics, Infor OS, and Infor Coleman to create transformational deals for some of Asia-Pacific’s largest organizations and companies.

“I am excited to lead Asia-Pacific, a region that continues to be a growth engine for the global economy,” said Masters. “We are confident that organizations in the region will be able to capture the full benefits and tremendous business advantages that Infor innovation and the cloud has to offer.”