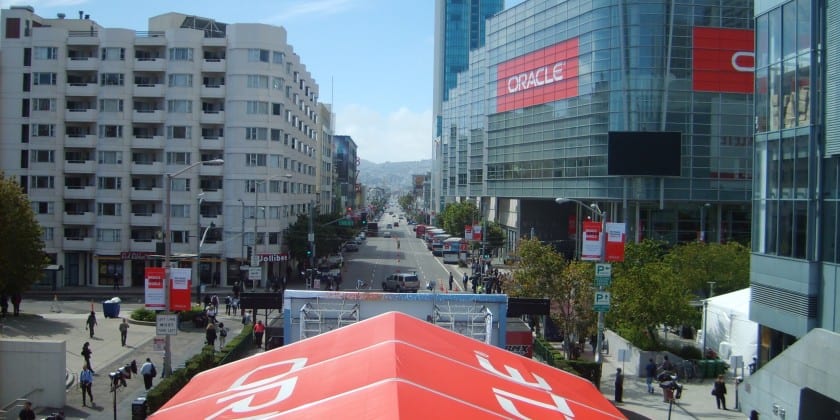 Oracle has brought OpenWorld to India for the first time. The company wants to capitalize on the new opportunities in the local market through one of its most successful events where stakeholders from all parts of the world take part. If Oracle is to be believed, Oracle OpenWorld India will bring together the best business and technology strategists from India and the world – including customers, partners, analysts and thought-leaders.

Oracle OpenWorld India will witness keynotes from Oracle’s senior leaders Safra Catz, CEO, Oracle and Thomas Kurian, President – Product Development, Oracle, on how the company is helping fasttrack government initiatives like Smart Cities and Digital India. It would be interesting to hear Safra Catz and know her plans for the India market.

The biggest question is as to why Oracle has brought its biggest event to India. Is it a sign of its renewed focus in India or the new opportunities which it sees in the government-led programs such as Smart Cities and Digital India? After being in India for over 30 years, we now have nearly 700 partners in India and the largest workforce outside the US. What’s particularly exciting is that India is at the cusp of a digital transformation, and the Indian government is leading from the front with initiatives such as Digital India and Smart Cities. This push towards digitalization, along with a digitally savvy population seeking better citizen engagement and experience, has created a massive opportunity for technology companies in the country,” said Shailender Kumar, MD, Oracle India.

While Oracle’s previous investments were about serving global customers from India, Oracle now believes that the future is about growing the Indian economy from within India and for all of India. These prospects became even more compelling and exciting when Safra Catz, met with Narendra Modi and several government officials during her maiden visit to India in 2016. “It is then that Oracle recognized the need to bring Oracle OpenWorld to India. Oracle is absolutely committed to make the Digital India dream a reality. The idea for bringing Oracle OpenWorld here was to offer a platform that would encourage collaboration between public and private players to accelerate the digitalization process in the country,” adds Kumar.

Oracle claims that OpenWorld will allow all stakeholders to come together, deliberate and work towards India’s digital future.

Oracle wants to strengthen its presence in the government sector. While top ministries in the Indian government already use Oracle solutions, the company is looking at more opportunities in the center and at the state-level. At OpenWorld, it plans to showcase its government push. “Top Ministries in the Indian Government run on Oracle products; we work with over 20 state governments across areas such as treasury management, education, modernizing municipal corporations etc. As public sector organizations modernize operations and enhance services, Oracle’s complete solutions enable them to become more responsive, efficient, and accountable. It helps them to take advantage of digital transformations enabled by the cloud,” says Niraj Prakash, Director – Applications Sales Consulting, Oracle India.

In order to make most of the government opportunity, Oracle has already launched ‘Smart City in a Box’ solution that offers cities a holistic way to expedite their journey towards becoming smart cities. This solution allows government bodies to run all smart city applications, such as, smart transportation, smart parking, smart waste and water management as well as the necessary digital technology services like IoT, mobile services, cloud services, Big Data and analytics, which allows convergence across multiple solutions for a smart city.

Ever since the pandemic has hit us, supply chain resilience has been tested beyond anyone’s…