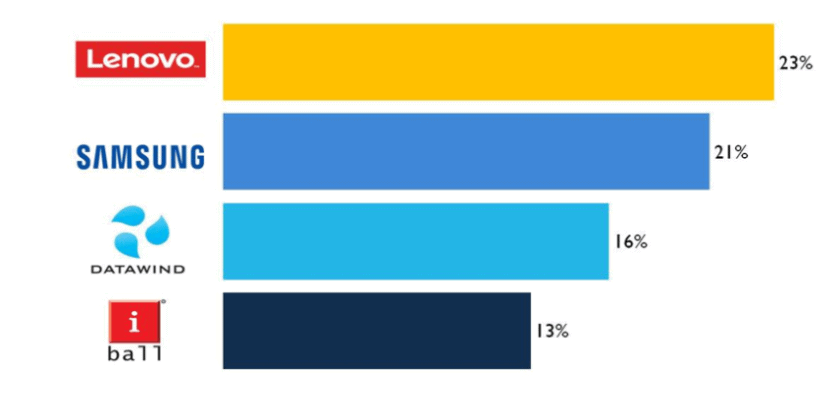 According to Menka Kumari, Analyst-IIG, CyberMedia Research, “Keeping in with the trends of 1Q over the past years, the first quarter was predictably slow. Vendors were busy clearing the previous stock than focusing on getting fresh shipments. Interestingly, a new breed of enterprise users, including restaurant managers, traffic police, salesmen, courier men, and e-commerce delivery boys, have emerged as a attractive bet for tablet companies. This segment will witness further traction in the coming quarters, with new enterprise use cases springing forth.”

The tablet market was dominated by Lenovo, Samsung and Datawind.

According to Menka, “Lenovo’s introduction of its tablets in educational segment, catering to Akash and FIITJEE, has helped the product company grow its base in the education sector in 1Q CY2018. Moreover, Lenovo’s new launch, the Tab 4 series, has largely helped in boosting the 4G tablet market. Growth and demand from B2B market is another reason for the strong growth of the tablet market.  To add, Samsung is largely growing in its INR 15K price band of tablet market, whereas Datawind’s 13% of its tablet sales were in the education sector.”

“Datawind’s strategy of keeping its products cost-effective has encouraged students to use them. The retail market has mostly been dominated by Datawind and iBall which is notably not present the B2B market,” said Kumari.

In the coming quarter, B2B market will gain mostly on the back of government initiatives in the education sector. Central and State governments, such as Bihar and Gujarat Governments, have been promoting digital-led education through various government schemes, enabling colleges and schools of learning to go for tablets.