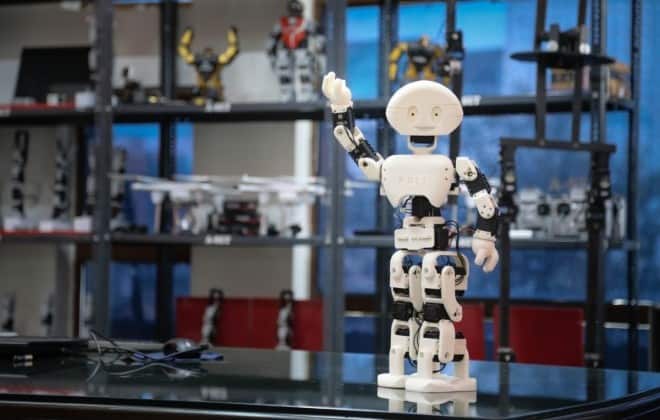 The structure of Robot MANAV is made up of 3D printed plastic. MANAV is 2 feet in height, 2kg in weights, powered by 21 servos. MANAV can follow instructions of Human beings. It has two cameras in his eyes and two headphones in his ears. It can perform stunning activities such as headstands, push-ups, and can also play football. It can dance better than human and is ideal for researchers to explore the boundaries in robotics.

It is unveiled by Diwakar Vaish, Head Robotics & Research at A-SET Training & Research Institutes New Delhi, who has programmed this Robot.

“It takes 2 months for me to make this robot.  It is fully designed, printed and manufactured in India by A- SET Training & Research Institutes,” said Vaish.

The prices of robot MANAV is between 1.5 to 2.5 lakhs which is much lesser than any other robots which are commercially available. Also these robots can be customized as per the consumers wish, said he.

Exhibitions at Tech fest, IIT Mumbai are a display of the latest breakthroughs in science and technology with the aim of promoting technology among the masses in India. Compared to last year this year’s Tech fest was bigger better and with more robots. Youngsters showed their curiosity and interest to know more about the programming which has been used to made robots.

Posted by: DQINDIA Online
View more posts
India gets its first 3D printed humanoid robot at Rs. 1.5 lakh 0 out of 5 based on 0 ratings. 0 user reviews.
Matrix to showcase its comprehensive range of security solutions at Intersec Dubai 2015
Exhibitions India group brings in the 23rd edition of Convergence India expo