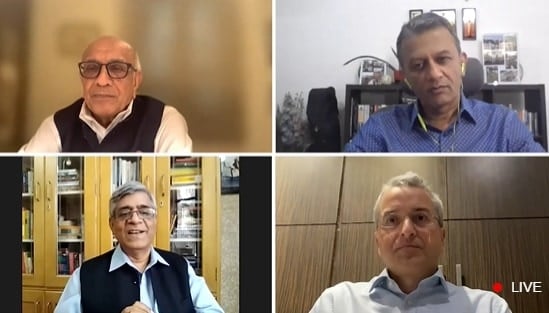 There was a fireside chat at the ongoing Dataquest Digital Leadership Conclave 2021. Pradeep Gupta, Chairman, CyberMedia Group, was the moderator.

Som Mittal, Former President and Chairman, NASSCOM, said there was no software to talk about back in 1989. The last 3-4 years have brought much more change. Covid-19 has accelerated innovation and adoption. Productivity has now gone up. The common man is using technology today. Cloud adoption has also received an acceleration. Now, we talk about the customers’ customer. There is much more focus on domain. There are architectures and solutions available. What’s ahead is significantly different! Technology should shine. Digital literacy may proceed traditional literacy. We had disinvested in hardware earlier. Now, we have taken that up again.

Sunil Vachani, CMD, Dixon Technologies, said post pandemic, some trends have emerged. Growth has been unequal among people and societies. People are now going to need data and devices. There was huge demand for devices in the pandemic. There was huge shortage of components. We need to create a strong and vibrant component ecosystem. There are issues that need to be addressed. The conviction was there always that India can emerge as the next hub for manufacturing of electronic hardware. There are still some people that it will not be possible. The mindset change and path-breaking policies have changed some of that.

Telecom traffic moved up significantly during the pandemic. How do you see the new world order? Sameer Garde, President, Cisco India and SAARC, said the PLI scheme is really different this time. Use of Cisco SaaS products have gone up. We were adding capacity like there is no tomorrow. We were getting advanced orders of 12 months from the hyperscalers. The divide has shrunk between haves and have-nots. Healthcare is seeing massive opportunities. Startups have also grown. Digital landscape has become more secular.

So, how can we accelerate? Vachani said that there are products not getting manufactured in the country. For those products, we need a scheme like PLI, it is a game changer. Even LED lights, ACs, are being met through domestic manufacturer. We need to manufacture components locally. We cannot be dependent on imports. We need to have a fab, but there are major issues. Even passive components, there are large imports happening, such as bare PCBs. Only when you have scale of the manufacturing product, you can have the component ecosystem set up and flourish. There are PLIs for ACs and LED lights. In future, the PLIs should be devoted to develop the ecosystem.

Look at exports!
Mittal said the downstream happened in the auto component industry when Honda started manufacturing in India. We slowly became globally competitive. Government should not allow that much protectionism. Garde added there is the exports dimension. We need to look at the manufacturing story from the export side, rather than job creation. Domestic consumption is not at scale in India. We can produce at least 80 percent of products for the world.

Vachani said the thought process has already set in. We are seeing large scale manufacturing in the mobile space. How can we create the environment for companies to come in? We need to have the correct duty structure in place for manufacturing. Components is one sector that faced zero duty. Majority of companies in China are SMEs. We need to make it easier and get SMEs to invest in components. Mittal added that as carbon becomes a big topic, India would still remain as the lowest carbon emitter. There are new competitive advantages we should have.

China has achieved in data supremacy. We also need to create data and work around it. Are we collecting data on vaccines? We have to be sensitive about collecting data. We can have better healthcare. Our utilization for railway tracks is dismally poor. We should see how we can democratize data and serve people.

New areas of innovation
What are some of the new areas of innovation that India should focus on? Garde said data is going to be the most important aspect. Aadhar and UPI are some good examples. We also have Jan Dhan. Areas that India needs to focus on is smart manufacturing. It makes sense to start smartly, rather than leapfrogging. We can work on smart agriculture. Germany invented the autobahn. There is a 6 percent cost gap in logistics. Another area is digital health. He feels that 80 percent of technology products will be built by non-technologists.

Vachani said we need to make technology more affordable for people. Mittal said government plays a very big role. There are building blocks being created. In Aadhar, we had the entire industry working. Collaboration has to change. Garde said he is trying to do the same. They are trying to set up a cloud in India. Few areas have been identified by the government, where they will buy in the PPP model. Agriculture, manufacturing, 5G, etc., requires some way to partner, and both are able to make money.

Vachani said the government and private sectors can do a lot. We can design low-cost products in India. How do we also build a design ecosystem in India? India is a large market for STBs. Garde said the passport model is a PPP model. We are putting in smart cities. Tomorrow, let the private partner get into the smart city and make money. Mittal added there is enough capability to do things in India. We also require people who don’t want to follow rules. In the software industry, the government was partner. We had STPI, which meant you can operate from home, as well. The intent is good, the capabilities are there.

Mittal added there is a great opportunity for India. More collaboration is required between the government and the industry. Garde agreed, adding we make this the growth decade. We need to look at Industry 4.0, logistics, 5G, agriculture, and making talent smarter. We need everybody to come together to make this a success. Vachani said we are sitting at a major opportunity. Take an example of Vietnam. They are a large exporter of ICT products. We need to have a component ecosystem, have a design ecosystem, and look at skilling more people.

Rajesh Gopinathan, MD and CEO, TCS, was conferred the IT Person of the Year award.

Posted by: Pradeep Chakraborty
View more posts
India can emerge as next hub for manufacturing electronic hardware 0 out of 5 based on 0 ratings. 0 user reviews.
[Deeptech Podcast] A guide to DeepTech Investment strategy
Enterprises now need to rethink hybrid cloud!