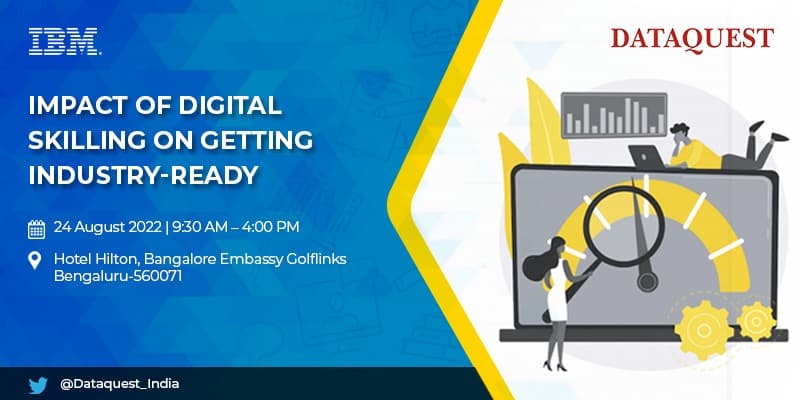 In a bid to bridge the gap between education and industry, IBM Global University (IGU) offers a plethora of programs online for faculty of engineering colleges and institutions in a variety of digital skills and emerging technologies. This was the focus of discussions held at the conclave on Impact of Digital Skilling in Getting Industry-ready, hosted by IBM and co-hosted by Dataquest India at Bengaluru on August 24, 2022.

In his welcome address, Sunil Rajguru, Editor, Dataquest said that we are living in happening times and it has become difficult for tech companies and computer science faculties to keep pace with the changes happening across the world. There is an increased use of technology and the smartphone has become an extension of our personalities. The ‘techleration’ (acceleration of technology development) and the boom in e-commerce has got us the jugular.

“Though the destination is not clear on this journey, a shake-up is imminent. No matter what degrees a job-seeker has, constant upskilling is necessary. It is evident that skills in Artificial Intelligence and Machine Learning (AI/ML) are essential even before the student engineer passes out of his college. Metaverse is no longer for gaming alone, and upskilling has become a lifelong process,” Rajguru added.

Mona Bharadwaj, IBM Global University, India Leader, was the first keynote speaker. She pointed out that the professional clusters that are currently in demand are AI, cloud computing, and emerging technologies and the job opportunities are spread across US, China, and India.

She explained that the IBM Build-a-Thon programme that is offered free of charge online to faculty focuses on Data Science and Data Analytics. She cited a pre-pandemic study which revealed that technology education needs to be immersive, location-agnostic, interactive, and personalized. She added that the future of work would be flat, transparent, on-demand and competitive.

She summarized her presentation stressing the constant need for skilling and upskilling to stay abreast of the rapid changes and innovations in technology and quoting that by 2035, there would be a 50% increase in job opportunities in India alone as envisaged by the newly promulgated National Education Policy (NEP).

Mona Bharadwaj said that online teaching comes with its own set of challenges. One is keeping the students interested in the lesson for long hours. She noted that IBM uses the Revised Bloom’s Taxonomy, which proposes a higher order of thinking and quality of teaching. IBM follows a partial delivery model with experiential learning, she added.

In his keynote speech, Amit Sharma, Managing Partner, Global Delivery, IBM Consulting, said that despite the edutech expansion and innovations that have already occurred, another 30% to 40% growth is yet to happen in the next few years. This is because over 90% of the upskilling happens online with over 600 million current users of edutech world over. Post pandemic, online courses are the new normal and even mainstream.

“There is an absolute need for academic institutions to embrace and adapt to emerging technologies. Across the board we need universities to be on the same platform. IBM as a company is pioneering AI/ML and hybrid cloud skilling because the future is already here, and interoperability of systems needs intense skilling. We are a reflection point where the students of today, build the world of tomorrow,” he added.

Sharma noted that India as a market had huge potential for growth by leveraging learning platforms that have been ‘democratized’ and easily accessible to all people.

In his presentation on the introduction of IBM’s academia-facing initiatives, Dr Mani Madhukar, Program Manager, IBM Global University Programs, delineated the features of the IBM Skills Build online program accessible through the skillsbuild.org website. He mentioned that the course was designed to benefit a wide audience beginning with high school students to adult learners, and that the program was geography-agnostic.

He explained in depth the details on the four learning paths that are a part of the program—cloud computing, data science, cyber security, and AI. He pointed out that it had self-learning and instructor-led modules, was interactive, and made available to university faculty if their institution signs an agreement with IBM. He stressed that in the educator-led structure, IBM would hand-hold faculty trainees who are awarded a badge on completion of the program. He also mentioned that the courses were recognized by the Ministry of Skill Development and All India Council for Technical Education (AICTE).

Dr Madhukar said that the courses are available on AICTE and Digital Skilling portals and that makes a good case for universities to offer these credit-based courses that map to current industry needs. He also proposed that universities must build a roadmap for the relevant programs to offer by signing an MoU with IBM. He also touched up the IBM Hack Challenge and other events like the 7-to-11-day bootcamp where AI/ML, Red Hat, cloud computing courses are taught.

He said that the courses included Agile Practices lessons and were also available on portals like Credly with badges given on completion of the course. As a value-add, the portals also show the job roles and technology postings available in the market for each course which will equip the student with better knowledge than his peers at a job interview. Dr Madhukar said that the Hack Challenge makes the course-takers industry-ready.

In the Fireside Chat that was held at the program with Sunil Rajguru as the moderator, graduates of IBM Build-a-Thon and other online courses shared their learning experiences.

J Sangeetha, Associate Professor, Ramaiah Institute of Technology, Bengaluru, said that gaps in education between the industry and academia were optimally covered in IBM online courses.

She said that the training that she had undergone, had given her hands-on experience. “At first, I was skeptical. But I felt I should give it a try. Now I am glad that I took the program,” she averred. She noted that she has been more effective as an educator and is sharing her newly gathered expertise with her students at the Institute. She shared that what she had learnt in the AI/ML and automation were very useful, especially the pre-recorded videos which are an important value-add. After taking the program, she expressed confidence in being more effective as an educator.

“The IBM instructors ensured that every sentence was easily explained. Even my little daughter would sit with me for the sessions. Mentoring through Telegram was a bonus. It was more useful than learning from a YouTube video,” she added.

Sangeetha also said the project that is mandatory for a course certificate was enjoyable and the bootcamp that preceded it was even more so. She mentioned that there were certain teething problems but easily addressed by the IBM mentors. She pointed out that the data sets provided were easily downloaded and building ML programs was an exciting experience. She quantified her experience at ‘90% happy’, and mentioned that the IZBM Telegram mentors made themselves available ‘even on a Sunday’.

The second participant in the fireside chat Chellatamilan T, Associate Professor, Vellore Institute of Technology, Vellore, said that the Build-a-Thon was a one-of-a-kind integrated platform where the skills learnt can be used in computer labs across the country. He lauded IBM for offering courses that are relevant to industry needs such as cloud computing, AI/ML, emerging technologies, and Data Science.

He shared that he enjoyed doing the project that was mandatory for the completion of the courseware. He said that he was using IBM’s course design and content in his daily lectures. He reiterated that because of the Telegram mentoring and interactivity, the IBM courseware was much better than a YouTube video. He noted that the IBM courseware was designed for easy deployment by universities.

He pointed out that all his doubts were instantly cleared by the educators in the AI sessions by responding to the questions raised in the chat rooms. He appreciated the flexibility of the IBM programs and the relevance of the course content. He reiterated the patient counseling offered by the educators and said that the course content was closely related to real world problems. He described the courseware as ‘excellent and effective’ and he was happy that he learned a lot.

At this point, Dr Mani Madhukar intervened to state that the course content and the data sets that are available on the IBM portal apply to several verticals and use cases. He admitted that soft skills training is needed to complement the existing courseware. He informed that the IBM courses were device-agnostic and can be taken on mobile platforms. He said the IBM programs were designed for a global audience and can be easily used for curriculum design. He also mentioned that a ‘huge’ workforce was available at IBM to assist the education sector.

In his keynote address, Girish Dhanakshirur, India IBM Cloud Lab Director, IBM Distinguished Engineer, and CTO, described the current scenario as a ‘race against a bullet train in which academia was sandwiched’. He pointed out that the rapid pace of developments in AI/ML, hybrid cloud, blockchain and automation were challenging Indian faculty who are engaged in re-skilling and upskilling to provide their students for a future that is already here. He noted that every six months, the faculty needs to unlearn and relearn. He described the gap between academics and industry needs as a ‘T shape’ where the fitment is not right. It needs to be two parallel lines.

Dhanakshirur said that IBM was passionate about educating and skilling students in emerging technologies. He urged universities to partner with IBM and use the latter’s online programs to train the trainers (faculty). He stressed that professors need to become students often to be able to train their students. He suggested that the pedagogy across the country must ‘build bridges with IBM’ to be better informed of the latest developments in technology.

Ranjini G, Associate Professor, RV College of Engineering, Bengaluru, who was the only course taker to garner two certificates of completion for the two different courses she took on the IBM platform, said that the courses were such that she can use the content as an interdisciplinary subject in her college as-is. She thanked IBM for this.

In his brief remarks, Thiru Nagarajan said today’s world of tech education was a ‘race to stay ahead’. Amith Singhee said that he was happy to be a part of the event and urged universities to embrace the cutting-edge courses offered by IBM Global University.

Mona Bharadwaj proposed the vote of thanks.

At the round table that followed, IBM’s Mona Bharadwaj, Dr Mani Madhukar and Poornima Iyengar interacted with the faculty who had completed various IBM Online courses. Among the suggestions that were made, some were that the programs should be made geo-specific and customized for the local audiences.

Another suggestion was the portal must allow course takers to create their own data sets. Many of the participants expressed that they were more than happy with their interaction with the Telegram mentors while taking the sessions. It was suggested that different Telegram groups for different courses be created to avoid crowding in chat rooms.

Posted by: DQINDIA Online
View more posts
IBM is bridging the gap between education and industry 0 out of 5 based on 0 ratings. 0 user reviews.
Reliance New Energy Limited to invest $20 million to acquire 20 percent stake in Caelux Corporation
India definitely needs work on semiconductors, and compound semiconductors!

Automation in supply-chain, warehouse operations will be key to make industries more agile

What can we expect from the Indian IT industry in 2023? How the industry has…