The season of mergers and demergers continue. UK based Micro Focus, the legacy modernization company acquiring HPE’s software business for a whopping $8.8bn sets in a new benchmark in the M&A space. HPE calls it a ‘spin off-merger’ of its non-core software assets. (HPE will retain the key software assets that will enable it to provide Hybrid IT).  HPE  will receive $2.5 bn in cash and its shareholders will have 50.1% ownership of the new combined entity.

Interestingly, this acquisition comes as a surprise as the last few weeks the industry grapevine suggested that a bunch of PE firms have demonstrated their interest in buying HPE’s software business, with Thomas Bravo emerging as a likely suitor. ( Read : HPE to Sell its Software Business to Thomas Bravo?) 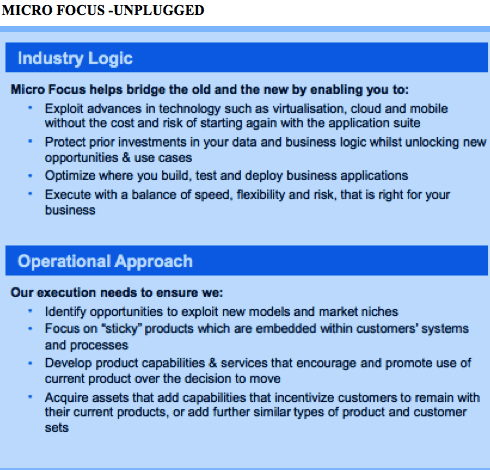 Coming to this deal, this will triple the size of Micro Focus to $4.5 bn in revenues from its current $1.4 bn (approx).  Now let’s look at what is being acquired. Micro Focus is acquiring the HPE Software unit, which posted a top line of $ 3.2 bn (approx. INR 19,500 crore) for the 12 months ended April 2016. By virtue of this acquisition Micro Focus gains access to HPE’s Software assets (which HPE calls non-core) cutting across IT operations management, Application Delivery Management, Enterprise Security Products, Information Management & Governance and Big Data Analytics. As part of the deal Micro Focus and HPE also announced their intent to enter into a commercial partnership naming SUSE as HPE’s preferred Linux partner.

Reflecting on the deal and HPE’s roadmap, Meg Whitman, President & CEO of HPE shared a post via LinkedIn. “ When we launched the new HPE, we laid out a vision of being the industry’s leading provider of hybrid IT, built on the secure, next-generation, software-defined infrastructure that will run customers’ data centers today, bridge them to multi-cloud environments tomorrow, and enable the emerging intelligent edge that will power campus, branch and IoT applications for decades to come. We believe this is what our customers are looking for, what we are best qualified to do and what will be the most successful path forward.”

“And today we announced plans for the spin-merge of our non-core software assets with Micro Focus. The combination of HPE’s Application Delivery Management, Big Data, Enterprise Security, Information Management & Governance and IT Operations Management businesses with Micro Focus will create one of the world’s largest pure-play software companies. Micro Focus’ approach to managing both growing and mature software assets will ensure higher levels of investment in growth areas like big data analytics and security, while maintaining a stable platform for mission-critical software products that customers rely on.”

Kevin Loosemore, Executive Chairman, Micro Focus said, “The combination of Micro Focus with HPE Software will give customers more choice as they seek to maximize the value of existing IT assets, leveraging their business logic and data along with next-generation technologies to innovate in new ways with the lowest possible risk.” 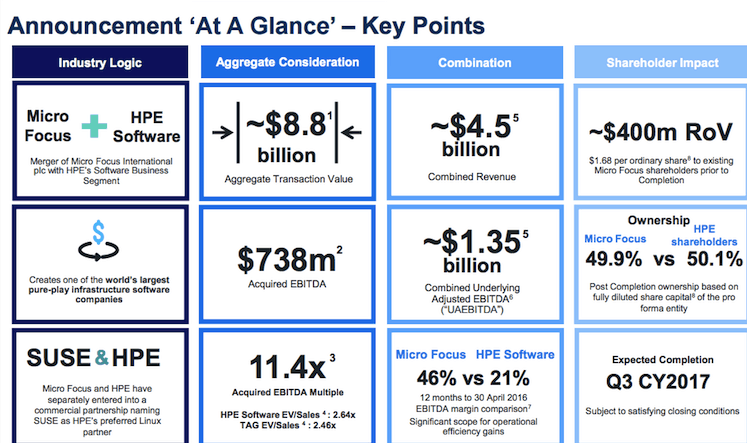 Company sources say that HPE is now a $28 bn in annual revenues entity and going forward it will leverage its own assets in Servers, Storage, Networking and Converged Infrastructure. Meanwhile  its newly created Software-Defined and Cloud business will build upon key software assets like HPE OneView and the Helion Cloud platform to deliver software-defined Hybrid IT solutions like Synergy –  HPE’s composable infrastructure offering that enables customers to operate their workloads with unprecedented speed and agility.

For Micro Focus, this buy gives it  ample leverage and stickiness in the enterprise software space. This is also makes for cross-collaborations going forward as Micro Focus can cash in HPE’s pan-global footprint cutting across evolved and emerging geographies.

Micro Focus helps you to run and transform your business. Its software provides the critical…