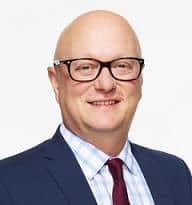 HP was split into two separate companies last year—HP Inc. and HPE. We got a chance to meet Shane Wall, Global CTO, HP Inc. to understand his plans on the future technology direction of the company. We must say, that the vision he has for the company is extremely insightful. For the past decade or so, the company hadn’t really been able to invest significantly in the print and client side of the business, but “now that we’re a separate entity, we get a chance to eat what we kill!”, said Shane.

The company has a refocused agenda, with both a short term business growth plan as well as long term direction for technology, which is around a vision they call blended reality. It’s a simple notion of the physical world interacting with the digital one. “They work in a virtuous reinforcing cycle, wherein you sample people/places/things/items, bring them into the digital domain, where you compute/analyze/communicate and turn back around and control”, said Shane. HP’s Sprout desktop, launched last year, is one example of that.

HP Inc. has broken blended reality further into five key pillars, based on how they see the world shaping up. These are 3D transformation, which according to Shane is going to be the next industrial revolution; Immersive experiences (one of the areas where sprout falls); Hyper mobility, which moves from a world of just simple tablet/phablet to something more on the body; IoT, and Smart Machines.

Shane explained that the five pillars of HP Inc.’s vision and the subsequent tech they develop, are based on the long range planning, which is done annually by their internal group that looks at emerging trends from a socio-economic, geographic, and govt. standpoint in the 30 years range. The group identified the following four mega trends, which are likely to influence where the world goes:

Mass urbanization: There were 10 mega-cities (10 mn+ population) in 1992, which by the end of this decade, will increase to 40+ mega cities. They will have their own culture, and will therefore require products designed especially for them. Being mega cities, they’ll have congested roads, pollution, and waste, due to which the way to bring products into and distributing them will change. Shane said how this has interesting implications for 3D printing, as companies won’t need to ship goods in and out of the city but to design them within. More on this later.

Changing Demographics: Today millennials are coming into the workforce. Half of India’s population for instance is under 25 years, and everyone’s aiming their marketing programs at them. 30 years later, this population will be over 50, and will have a different set of needs, as they’ll live longer, will have different healthcare needs, and all sorts of demands. We again try to focus our solutions around these needs.

Hyper Globalization: Shane also called it ‘Glocalization’, or the manner in which an idea spreads quickly around the world thanks to the Internet, but gets localized in different markets according to their needs. This feeds to how products can be designed differently. “So instead of mass-producing a product in China, and shipping it everywhere with the hope it hits, you create a rough design and let it be customized in different markets”, explained Shane.

Rapid Innovation: Today, the Internet has enabled disruptive business models, which are being driven by startups. In India alone, there are around 4,000 startups. The tech is available, ability is there, and so is financing. “It’s enabling rapid innovation, and we at HP believe India is one of the top 3 best startup locations in the world, and we’ll treat it as such. Here is where we do believe it’s a huge opportunity”, added Shane.

Shane explained how the four mega trends above led to the following five pillars that form the basis of HP Inc.’s long term growth strategy:

3D Transformation: According to Shane, 3D transformation is the next industrial revolution. The process for the last 150 years has been to bring in raw material, store it in the most efficient way, do low cost manufacturing through automation and low cost labor, stage it in distribution centers, warehouses, and retail center, and then figure out how to optimize that chain front to back.

“If you’ve got good marketing on top of that, then you have a chance to win. It doesn’t matter whether you’re doing Twinkies, Toyota, or Tablets, the model has remained the same. This model will be radically changed over the next thirty years,” said Shane.

Shane believes that due to mass urbanization and hyper globalization, companies would want to know how to manufacture on demand and locally. So while HP’s Sprout allows you to take an object, place it on a map, edit, change, and personalize it, you can move it to the back side, and at the push of a button, print it out on a 3D printer. Shane talked about their upcoming 3D printer, which will use their multi-jet fusion technology to do the most innovative 3D designs in the world. “The tech will be 10 to 100x faster, at 20% of the cost, and will offer much greater part quality because it can operate at a pixel (or voxel) level”, added Shane. He showed a thermo-plastic lens produced in a single pass, as well as a chain link strong enough to lift a car, both 3D printed on HP’s technology. “It can be made stronger, because the depth of the material can be controlled, resulting in a thermo-plastic that has characteristics much closer to those of a metal”, he explained proudly. “Likewise, we can do color at the voxel level and 3D print every color in the rainbow and determine it at every position. It can be done at great granularity, such as 3D printing a miniature guitar with all strings functional. It can be done on all parts and not just on the surface. In general, the 3D printer can support different materials, operate with very low cost plastic, to produce a wide variety of material that varies in characteristics”, added Shane.

Initially, 3D printers would be used for prototyping or industries where low-volume, high-value manufacturing is required. As things progress, it will get faster, part quality will get better and material quality will expand. “If you think of the automotive industry, they’re already ready for it today. If something breaks in your car, automotive industry has to keep spares. With 3D printers, you don’t. Just find a diagram and then print it out!”, added Shane.

Hyper-Mobility: HP Inc.’s mobility vision moves from the world of glass slabs—tablets, phablets, and phones into things that come on the body. HP Inc. has launched a few things in wearables, but not like the regular ‘techy’ pieces of bands crammed with lots of apps and tech, which are usually found out there today. “We didn’t take that approach”, said Shane. “We feel that wearables aren’t anything new. They’ve been around 30,000 years, like tattoos, bracelets, necklaces, earrings, etc. They are all a statement of yourself”. Shane felt that there’s no point of re-inventing the wheel, so instead of putting tech on your arm, head, etc. HP Inc. started with fashion first and supplemented it with tech. One good example of that is Titan Juxt, a smartwatch that has been engineered by HP. “We do all the backend engineering design, Titan does the watch design and fashion and then they distribute it”, added Shane. The company won’t stop there, as it’s an interesting business. There’s much bigger opportunity in the commercial space—building entry, building access, access to computing resources, security for authenticating individuals to resources around him. “That’s where we intend to go, and then we can move to the mobile world, and expand it further where we move things onto the body”, said Shane.

IoT: Here, HP Inc. has a platform that gives them the opportunity to get into new segments. But instead of hooking sensors to compute platforms, Shane feels there’s actually a bigger play. For instance, physical objects can be 3D printed with security markings into them to track them. “It’s like embedding watermarks into a picture”, said Shane. The same tech can be applied to multi-jet fusion to do unique patterns throughout that can be easily recognized by a simple scanner. “I don’t even have to make it visible. It’s completely invisible, and yet it can be tracked in the supply chain, know its authenticity, etc.” he added. So, even though there’s a physical thing that has no tech in it, one can associate an Internet service with it, to track it. “It’s an absolutely radical approach in the next industrial revolution” said Shane.

Immersive Experiences: The last of the pillars has its roots in HP’s Sprout, which Shane feels is the beginning of a platform. “We’re further experimenting in our labs with whole room compute models, where the wall is the entire surface, or when the lightbulb is the computer and you project it down on a surface. When I call up a compute, I just gesture and it can put keypads, videos or objects that I can interact with. The footprints of Sprout are starting”, he added.

Most of the last bit is of course still at a lab stage, but Shane is confident that they’re at a point where it could all be very real.

Smart machines will enter mainstream adoption by 2021, with 30 percent adoption by large companies,…

Full Autonomy May Not be Possible or Desirable in Smart Machines: Gartner

By 2020, smart machines will be a top five investment priority for more than 30…

PC shipments in India totalled nearly 2 million units in the first quarter of 2016,…