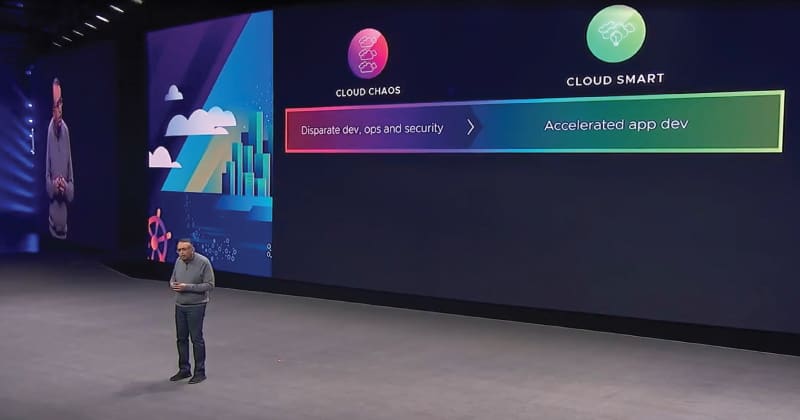 Cloud has been around for decades, but its adoption rate really accelerated during the past 2 years as enterprises demanded more agility, speed, and responsiveness from IT for their business. In fact, it has reached a level where single cloud is no longer sufficient to cater to growing enterprise needs. Multi-cloud is a necessity, as also quoted by most industry analysts around the globe. Shifting to a multi-cloud environment however, is no bed of roses and managing it is even more difficult. According to VMware CEO Raghu Raghuram, enterprises are currently in a state of cloud chaos, and to move from chaos to order, they must become “cloud smart”. In his keynote at the VMware Explore 2022 annual conference earlier this year, Raghu outlined the strategy enterprises should adopt to become cloud smart.

“Despite cloud adoption showing phenomenal growth, it comprises only 10% of total enterprise IT spend due to various roadblocks…these can be fixed using a Cloud Smart approach.”

The Main Roadblocks to Multi-Cloud Adoption

Enterprises of all sizes are in a race to digitally transform their businesses. In fact, digital transformation strategies that were planned to be implemented a few years down the line had to be executed immediately due to the pandemic. It has actually increased the velocity of innovation according to Raghuram, with a lot of focus on automation using technologies like AI and Machine Learning to enhance employee productivity or streamline other business processes. Cloud acts as a key enabler in this journey, starting with transforming the front office experience with next gen mobile apps to the mid and back office. Raghu calls it “the Great re-platforming”. As easy as it may sound, CEOs feel that they’re not moving fast enough on this re-platforming journey.

Lack of skills is one major roadblock to this agility, which includes not only developer skills but cloud skills, SRE skills, platform skills, to name a few. The second roadblock according to Rahu is the weight of all enterprise applications being built, and the third is inconsistent developer experience due to applications being developed on multiple clouds with each following a different model. This fragmented operations model slows them down, and also leads to a fragmented security model that increases risk. Overall, this slow-down in re-platforming leads to what Raghu calls Cloud Chaos.

“Our revenue from their services and subscription-based business is more than the license based one, and we expect that to continue to grow.”

Despite cloud adoption showing such phenomenal growth, it comprises only 10% of the total enterprise IT spend due to the roadblocks we just mentioned. The roadblocks can be fixed using a better approach, which Raghu calls Cloud Smart. It’s a more architected and planned approach to Digital Transformation and multi-cloud. Some core principles of being cloud smart are:

• Get a consistent infrastructure: All cloud applications should be run on a consistent infra that has the resilience, security, and same operational model regardless of where you want to run it (in the data center, edge, or a cloud of your choice). Plus, it should be cost effective.

Moving Customers from License to Subscription Based Model

The shift to multi-cloud obviously means that customers would have to shift to VMware’s subscription-based model from the traditional licensed based one. As VMware has already been offering its services in the cloud, according to Sumit Dhawan, President of VMware, “Our revenue from services and subscription-based business is more than the license based one, and we expect that to continue to grow”. It’s all customers and markets driven, according to Dhawan. That’s because customers want more innovation on their lifecycle services and cloud connectivity along with greater flexibility to take their capabilities to the cloud. “All the innovation by definition has to be done through subscription offers because license based model hasn’t really worked”, he said. “We’ve created programs that make it easy for existing customers who’ve invested in our license based traditional models but want to benefit from subscription, to leverage their existing investments and move to subscription based model without having to re-purchase”, he added.

Addressing Needs of the BFSI Segment

According to various stats, adoption of cloud is 8% in the BFSI segment globally, with security and regulatory issues being the prime concerns. VMware is tackling this in three ways, according to Sumit Dhawan. “First, is to automate the creation of security based workflows using our Tanzu Application platform”, said Dhawan. According to him, while cloud helps democratize application development so that it’s free of Infrastructure restrictions, it becomes difficult to standardize your security workflows and rules. Today, a lot of the security rules are created through paper-based policies, which by the very definition, is nearly impossible to secure. “The Tanzu Application platform helps enforce security through automation and technology”, he added. The second issue according to Sumit is security issues with private cloud. Though banks are shifting to it thinking that it’s more secure, since their critical data remains in-house, there are security issues with it. These are in the lateral, or east-west movement of data within servers. “While north-south movement of data from server to network is being secured with network firewalls, the problem is with the lateral movement of traffic within the server, because the number of VMs in servers continues to grow in servers. Due to this, only about 5% of the traffic hits the network, while the rest flows between the VMs”, he said. If an intruder is able to infiltrate the server and sits there listening to all conversation for a month, nobody would know until finally, it takes action and creates a breach. “We’re making lateral security as a key component of application communication within a server at the virtualization layer”, Sumit added. This lateral movement is a security issue in containers as well, which is why VMware has created a technology called ServiceMesh. It’s a part of their Tanzu Kubernetes operations platform. It’s an open-source solution that helps you see what communication is taking place between containers and enables you to set policies.

“Our customers are reacting very positively to VMware’s Cloud Smart strategy. In fact, many of VMware’s individual products were already sort of moving to a cross-cloud architecture, which have now been formalized with the term Cloud Smart.”

“The third and last thing being done is to operationalize these things through our latest product, Aria”, he said. In one single way, Aria does the co-ordination across all clouds and sends info to the security team. This really simplifies things as there’s a clear handshake across all clouds in a consistent fashion.

Customers are reacting very positively to VMware’s Cloud Smart strategy, according to the company’s CTO, Kit Colbert. He feels that many of VMware’s individual products were already sort of moving to a cross-cloud architecture. They formalized it with the term Cloud Smart this year. A common use case for cross cloud architecture is secure supply chain. “Usually, there are separate teams for each public cloud, having their own tooling, which is just not sustainable due to inconsistency and incompatibility. There are also issues with managing all the cloud costs, etc. Our Aria product helps you automate this management of multiple clouds”, he said.

Are Enterprises Ready for Multi-Cloud?

There are so many products for multi-cloud, but are enterprises really ready for it? How much of infrastructure changes are required to move to multi-cloud? According to Kit Colbert, it’s really up to the enterprise how they want to leverage it. VMware’s cloud smart products can also be used with a single cloud, as it’s best of breed and lets you write really great functionality. “If an enterprise wants to move to multi-cloud, then they have to decide want to standardize across clouds and what to allow to be different. There’s no one-size fits all”, according to Kit. “The question that becomes important is which capabilities you want to use”, he added. In fact, cross-cloud and multi-cloud are not just a VMware thing, but the whole industry is moving to it. So, for an enterprise, it should be more of a strategic discussion around what to do.

The author was hosted in San Francisco by VMware.

Posted by: DQINDIA Online
View more posts
How Enterprises can Become Cloud Smart in a Multi-Cloud World 0 out of 5 based on 0 ratings. 0 user reviews.
Data Localisation and Cyber Compliance
Isolated attempts can cause disaster

Oracle understands the need of cloud acceptance, implementation, and beyond

How AWS enabled the making of ‘Avatar: The Way of Water?’

In December 2022, James Cameron’s Avatar: The Way of Water, the visual spectacle and sequel…