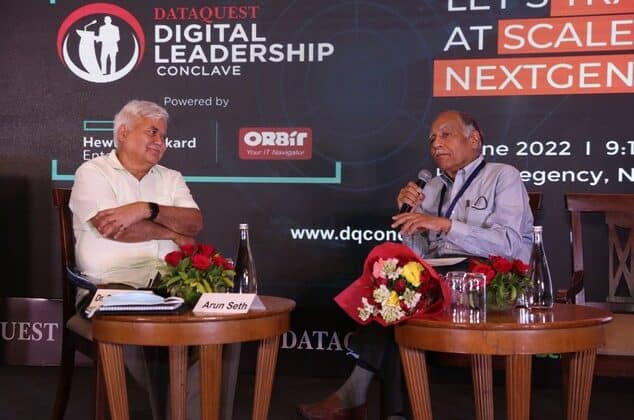 At the Dataquest Leadership Conclave held at New Delhi’s Hyatt Regency on June 8, there was the inaugural fireside chat on “Upgrading healthcare with next-gen tech”. Dr. RS Sharma, CEO, NHA, was in conversation with Arun Seth, former Chairman, BT, and Board Member, Narayana Health, Jubilant, and CyberMedia Group.

Talking about how healthcare is being delivered today, Dr. Sharma said that ICT can solve many of India’s hard problems. UPI is one example, as is Aadhar. There are India-stack products, such as digital lockers, etc. They are scalable, interoperable, frugal, etc. The digital divide issues are many. Any platform built has to be inclusive and in multiple languages. Digital has been a well-known development during the pandemic. We have learnt to use digital. Data prices are cheaper today.

Digital public goods have also been created, such as payment and identities. We need to put in a mechanism so that people can talk to their doctors etc., in a seamless manner. In fact, Ayushman Bharat Yojana is one such scheme that is in the right direction. Using interoperable video consultation will further improve productivity. Digital prescriptions, digital delivery of drugs, etc., are now there. Every Indian will have a health record. We have 22 crore people with Aadhar numbers. If you do digitization in the health sector, it will make lives easier. It will help in data-driven policy making. We are also generating 1 million health claims per month. We now need to accelerate this effort. India has shown we can have societal-level deliveries.

Seth added that UPI removed the friction. The CoWIN platform is also being driven on the healthcare platform. How can we expand the scope of such platforms for healthcare? Dr. Sharma noted that removing the information asymmetricity is very important. We need a digital architecture for doing that. You also have the availability for vaccines on CoWIN.

We are now repurposing and enhancing CoWIN for further use, such as blood bank systems, etc. We are also increasing the level from the platform to the networks. Platforms are not interoperable. We need to evolve to networks. For example, emails work on protocols. UPI works on protocols. We are doing such work on ONDC. In health, we are calling it UHI or unified health interface. Such a thing will make platforms interoperable.

Data-predictive analysis will also happen soon. We are having AI engines that can be used as a service. AI and robots can also be used for second opinions. Ultimately, robots will run on AI on the backend. We are also creating a healthcare and insurance system.

The theme of the conclave was Let’s Transform at Scale with NeXtGen Tech and featured the 29th ICT Business Awards show.

Posted by: Pradeep Chakraborty
View more posts
Health sector digitization will drive data-driven policy 0 out of 5 based on 0 ratings. 0 user reviews.
HR can support a healthy tech development through diversity
Disruption in business due to startups, frameworks and platforms

Role of data analytics or data science in real estate