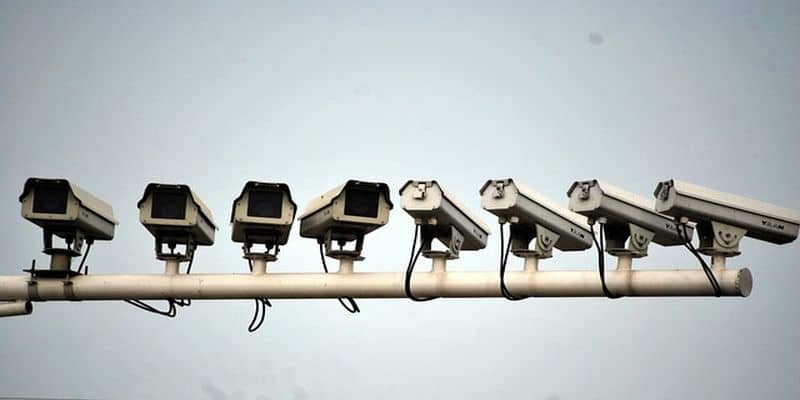 A late night fire was triggered at the godown of Praveen Kumar (name changed), who manages last-mile logistics operations through his warehouse based in Meerut. The source of the fire could not be traced as the video clearly showed that there was neither any electric spark nor were their electrical wires at the source of origin.

Fortunately enough, Praveen did not encounter any major losses, as his video surveillance system instantly detected the fire hazard and generated an alert even when the smoke detector nearby failed to. It was later found out that one of his business associates had erroneously packaged Class I flammable material which eventually resulted in the warehouse fire.

Praveen not only sued the business associate, he also dragged the fire alarm panel and smoke detector firm to the court for potential damages – that could have ultimately led to the loss of both, life and property. His case impeccably elucidates how day-to-day life and business operations can fall prey to human errors and omissions, and that of machines.

This is one of the major reasons why organizations and businesses from numerous market verticals are today adopting video surveillance solutions in India.  Not surprisingly, therefore the Indian video surveillance market is growing at a CAGR of 27% over the last few years and clocked Rs 5,467 crore in 2017-18 (Dataquest estimates).

Video surveillance need has grown in India specially when talking about this era of technology. Video surveillance is very important in terms of maintaining social control, recognize and monitor threats, and prevent or investigate criminal activities. Whether it is the Mercedes hit-and-run case in Delhi or the Bangalore molestation case, CCTV cameras have always helped in law enforcement and investigations.

These have proliferated across our public spaces in the last few years, mutely observing our movements. It is the police, shops, companies and individuals also who installs them. Public safety has emerged as an important function for governments across the world. As cities continue to grow, video surveillance becomes the primary tool to monitor population movement and to fight crime as well.

The Indian video surveillance market is projected to grow at a CAGR over 10.5% during 2018-24. Currently, though analog-based surveillance systems have accounted for majority of the share (68%) in the overall market, yet IP-based surveillance systems are expected to increase in the next five years due to increasing IP infrastructure, declining prices and demand for remote access. In 2017, Government & Transportation, Commercial offices and IT/ITes segments altogether contributed nearly 50% revenue share towards the overall video surveillance storage market in India.

Moreover, in terms of mode of deployment, on-premise storage bagged maximum revenue share followed by cloud storage. Although, verticals such as government and BFSI restrict adoption of cloud storage for data security concerns, however, customers are switching towards cloud based technology as it provides improved accessibility and cost effectiveness; cloud storage is projected to display highest growth rate during the forecast period.

So, who are the major players in the video surveillance domain?  CP Plus leads the market share with 24%. While local (brands like Zicom and Videocon) and Chinese brands (the likes of D-LINK and VIVOTEK)  have 28% market share, Dahua and HikVision got 19% and 17% market share respectively. Panasonic, Godrej put together have 8% market share and MNC brands like Axis Communications, Honeywell and Oncam make up the remaining 4%. 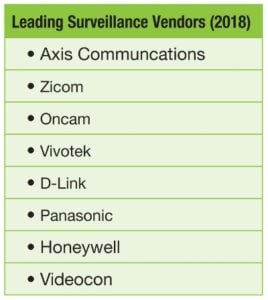 CP Plus is one of the leading industry players in the field of physical security. They have tailored solutions for safe & smart city, banking, education, healthcare, hospitality, real estate, retail, transport and police. These include:

CP Plus has consistently been India’s No.1 security and surveillance brand for the past 6 years; it presently holds the largest market share in the industry. In FY18, the company launched its ‘Bright Ideas’ campaign in India. The Bright Ideas campaign defines constant innovations in surveillance technologies based on the needs of customers. Under the Bright Ideas Campaign, CP PLUS held technology road-shows in Delhi, Mumbai, Bangalore, Hyderabad and Ahmadabad.

Axis Communications is one of the pioneers in IP based surveillance solutions. The company emphasized on innovation, strength and durability which are customized to the needs of different market verticals such as retail, BFSI, smart cities, critical installations and industrial applications.  Its products include AXISQ61 Series, AXIS Perimeter Defender, Axis Multisensor Panoramic Cameras

Axis Communications is a largely channel oriented company covering Indian metros and cities through our ecosystem of partners – distributors, resellers, system integrators and application developers. Axis focused on strengthening the domestic presence in India with the help of its existing partnership programs, to reach tier 1 and 2 cities across the country. The company’s aim at doing this by expanding product portfolio, introducing innovative products using the latest ground breaking technologies Axis infer through market feedback and requirement. It has mid-size and large scale systems to focus on the industry segments like manufacturing, city surveillance, Education, Hospitality, Commercial sector.

Zicom has product offering in all the key product verticals, including

Zicom has always been a pioneer in providing new solutions and options to the customer. Based on this philosophy, it was the first one to offer Security as a Service solutions to customers through OPEX model. Most of the services in its portfolio is offered through this model.  Its channel Structure is a traditional 2 tier structure with the regional distributors covering a city or State and all Tier 2 partners procuring material from them.

For Specific products which require higher level of expertise in Solution designing and implementation, it engage with a select set of System Integrators and also have Security Ambassador Program for the MYCS initiative which gives excellent opportunity to partners involved in the traditional box selling business to enter and see the benefits of Selling security solution services to the customers.

Oncam is an independent, specialized IP video and technology company with a reputation for being one of the most innovative firms in today’s market. Oncam’s sole focus is on 360-degree and wide-angle smart IP video products. Evolution product range is made of fisheye lens cameras, both for the 360 and 180-degree cameras, offering either a 5MP or 12MP option.

It has about eight to ten(regional) channel partners in each of the four geographical regions of India, alongside nationwide surveillance and security players. Oncam is also in the process of reinventing channel network for other SAARC countries such as Nepal, Bangladesh, and Sri Lanka. There are about three distributors in the country. Oncam’s national security and IT distributor spread involves one security partner, one IT distributor, and one cabling partner.

VIVOTEK has two major distributors in India, namely Atos and Redington and also have 75 channel partners across the country, a figure that VIVOTEK is planning to take to one hundred by mid-2018.  It has around eighty to hundred domain-specific integrators on board to look after various provisions.

In The Pink: It was a Good Year for Projectors

Projectors, which were previously popular across large enterprises only, now have found its many usages…

On A Roll: Cybersecurity Takes the Center Stage

In the wake of organized and large-scale cyber-attacks and multiple incidences of data breaches, organizations…