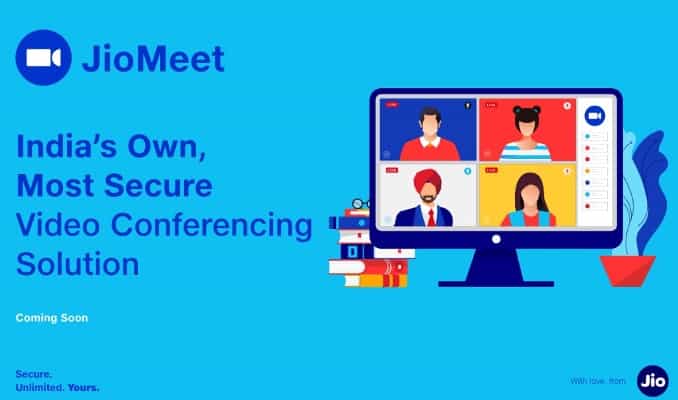 After the Government of India’s “Aatma Nirbhar Bharat” pitch and the banning of 59 Chinese apps, the clamor for the adoption of “Make-in-India” products is now more than ever. Citizens of the country seem to be willing to give up long-established popular products to support the movement. Although video conferencing solutions like Zoom have become indispensable to organizations over the last couple of months, people are looking for a reliable Indian alternative of the app. JioMeet is Reliance Industries’ own video conferencing tool that is expected to be made available in the country soon

Reliance Industries seems to be testing JioMeet, the company’s own video conferencing platform, which is yet to see its commercial launch in India. To start using the platform users will need a valid invite code from a registered JioMeet user. Several users claim that they have been able to use Reliance JioMeet through an invite.

“JioMeet is the answer. I just got an invite to try it out. Looks very similar to Zoom,” says Suresh Kochattil on Twitter who claims to have got an invite from Jio to test their JioMeet App. “I started using JioMeet.. I got referral code from a friend of mine who happens to be Jio Employee.. It’s cool app for HD video conferencing up to 100 participants,” says Farooq Motiwala on Twitter.

Features of the Reliance JioMeet Solution

While not much is known about the app, the following are the expected features of JioMeet:

Posted by: DQINDIA Online
View more posts
Now is a Good Time for Reliance JioMeet to Make its Entry into the Market 0 out of 5 based on 0 ratings. 0 user reviews.
India poised to be next data centre destination; likely to grow 2X times by FY25
NMDC Recruitment 2020: Engineers can Apply for 22 Vacancies, Salary up to Rs 1,50,000