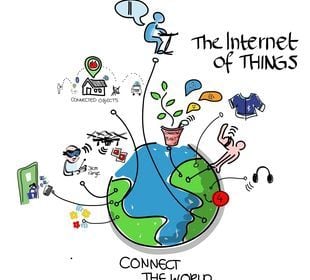 New research conducted by the element14 Community, an online community of more than 300,000 electronics engineers, has revealed high consumer interest worldwide in the Internet of Things (IoT) and a huge potential value to developing economies.
The study, conducted as part of element14’s mantra, “Engineering a Connected World,” included more than 3,500 people in North America, Europe, Asia and Australia. When asked if it would be beneficial to connect more devices and appliances to the internet, 43 percent agreed. However, the research highlights a notable thirst for increased internet connectivity in developing economies, hinting that IoT has the potential to continue the trend for increased access to the internet in developing economies that mobile has created.
On average, 31 percent of consumers in Australia, France, Germany, the U.K. and the U.S. agree that the more devices in their home that connect to the internet, the better. This figure more than doubles to 71 percent for consumers in both China and India, newly industrialised countries with lower percentages of population with internet connectivity (according to World Bank data).
The research findings give new credence to the launch of the latest Design Challenge from the element14 Community, Enchanted Objects. As part of the challenge, Community members across the world are encouraged to re-imagine everyday objects using embedded Internet of Things technology, as explained in this video.
Other findings from the study include:
• Respondents in China and India are also more likely to agree with the statement “The more of the world that is connected to the internet, the better,” indicating that desire for connectivity extends beyond their homes. On this statement, 73 percent and 86 percent concurred for each country respectively, compared to just a 55 percent average across Australia, France, Germany, the U.K. and the U.S.
• People in China and India are much more open to wearing a connected device such as a smartwatch or smartglasses, with 66 percent and 63 percent agreeing, compared to 26 percent on average in the other countries surveyed.
• In the U.S., nearly two thirds (68 percent) are concerned about notification overload as an effect of connected devices, highlighting the need for intelligent automation and minimal interaction in IoT technology
• With regards to the privacy implications of IoT, France was revealed to be the most concerned nation with 81 percent agreeing this was an issue for them. The average number was only marginally lower (77 percent), showing IoT technologies must be transparent and address privacy concerns.
• Aside from India and China (which were 59 percent and 63 percent respectively), Brits and Germans are the most gadget-obsessed nations, with 50 percent of both agreeing that they cannot live without their gadgets and technology.
The Enchanted Objects Design Challenge will be judged by a panel of IoT experts. This includes Dr. John Barrett, Head of Academic Studies at the Nimbus Centre for Embedded Systems Research at Cork Institute of Technology (CIT) and Group Director of the Centre’s Smart Systems Integration Research Group.
Barrett commented, “The IoT has immense potential, but individuals and companies also have very valid concerns about security and privacy in an interconnected IoT world. In Nimbus, security and privacy are an integral aspect of our research and application development, and worthwhile IoT devices need to reassure users they will get something they value in return for allowing their data to be collected. I’m very much looking forward to what participants in the Enchanted Objects Challenge produce.”
Dianne Kibbey, element14’s Global Head of Community, added “Everyone – from our component suppliers to manufacturers of consumer products – is talking about the Internet of Things because its potential and importance will be revolutionary. IoT offers so many opportunities for new functionality and capabilities outside of existing products, and many companies and product designers are being forced to rethink their traditional businesses. While some are struggling to realize and understand IoT’s significance, this research shows key geographies and applications where IoT has strong potential.”
“On the element14 Community we’re ‘Engineering a Connected World,’ and the Enchanted Objects Design Challenge is about giving ordinary objects a new life – ‘enchanted’ by the power of IoT. We’re excited to see what our members can imagine and deliver against this challenge.”

Posted by: DQINDIA Online
View more posts
Global research from element14 reveals the importance of the Internet of Things to developing economies 0 out of 5 based on 0 ratings. 0 user reviews.
Hybrid Cloud to Dominate Cloud Deployments in Asia Pacific in 2015
Panasonic launches Fully Rugged Android Tablet FZ-B2 for the Indian Market