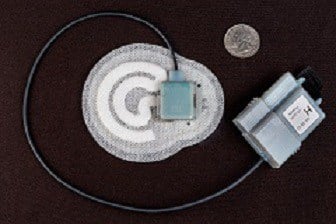 What if your future annual physical simply involved wearing a disposable band-aid like patch? GE scientists, partnering with NextFlex and Binghamton University are developing a wearable multi-device sensor patch that could one day make that possible.

“Our new wearable multi-device sensor patch will redefine the meaning of a doctor ‘patching you up,’” Azar Alizadeh, Principal Scientist at GE Research and project leader of this new wearable sensing platform. “In the future, a doctor could capture all your vitals, key biochemical markers and other important health indicators in a single patch. Your annual checkout could turn into a daily or weekly one, which allows doctors and patients to more closely monitor their health.”

Alizadeh added: “We expect to have a prototype of a new wearable patch ready for testing later this fall that can measure heart rate, respiration rate, temperature and other vitals. Separately, we also have begun work on an interstitial fluid patch to examine the body’s bio-chemistry. This would check many of the boxes doctors cover when conducting an annual physical on patients.”

Alizadeh explained that examining interstitial fluids would allow for analysis of cortisol, lactate and other substances doctors commonly look at to assess a patient’s health. The newer wearable projects will build upon successful field trials of GE’s sweat sensor patch that Alizadeh and the GE Research team recently completed with Air Force cadets in partnership with the Air Force Research Lab (AFRL); NextFlex, the US federal government’s manufacturing innovation hub for flexible hybrid electronics; the Center of Advanced Microelectronics Manufacturing (CAMM), the NextFlex New York Node at Binghamton University; and New York State’s Empire State Development. The sweat sensor patch is being demonstrated during the Electronics Symposium.