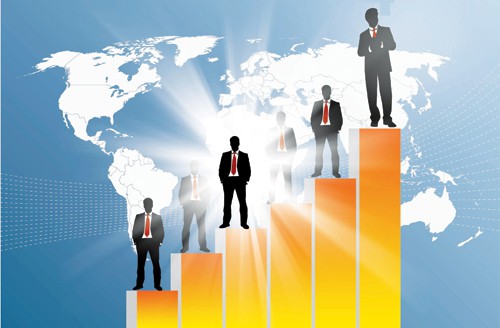 Aegis BPO, one of India’s largest BPO players, made a surprising move—it exited the US market, one of the highest revenue generating markets for the BPO industry, by selling off its US business Aegis USA Inc. to Teleperformance USA. Sandip Sen, Global CEO, Aegis explains that the profitable deal was rooted in the company’s strategy to pursue growth in new markets.

Actually, it is a story of smart financing strategy and value engineering on Aegis’ part. Aegis is part of the Essar group in India and it is one of the portfolio companies under Essar Global Fund, an investment fund managed by Essar Capital. The recent transaction involving the sale of Aegis USA Inc. is an example of optimization of value: Essar Global Fund made a return of 7X on its investment when it received an aggregate consideration of $610 mn on the transaction. Aegis USA represented 50 percent of the overall BPO business vested within Aegis and ran revenue of $400 mn annually, with more than 19,000 fulltime employees across 16 centers in USA, Philippines, and Costa Rica.

Around 2004, the Essar Group wanted to shift out its core focus on infrastructure, commodities, and power. With the boom in the global BPO sector at that time, the group was intent on creating monetizable assets in the area. It began its foray into the sector by acquiring Aegis USA Inc. The deal seemed counterintuitive then because the company barely had 1200 employees with $70 mn revenues, all from onshore business. Further, the company was loss making and Essar had to fund losses of about $1.5 mn per month. When you compared it with rest of booming BPO sector in India, the deal neither provided scale nor returns to make a dent into the global BPO market opportunity. 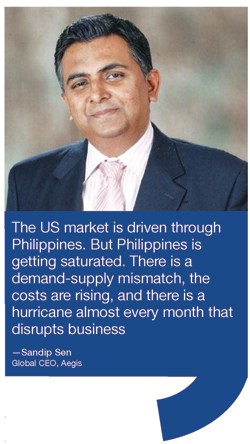 Four years later, the company acquired people support in 2008 in a leveraged buyout for about $250 mn in which Essar invested just $25 mn. Says Sandip Sen, “Through the ten years since its inception, Essar strategically invested in the business through a judicious mix of organic growth and strategic acquisitions to create a BPO entity that had global footprint across 56 centers, 12 countries, 55,000 employees, with revenue of about $800 mn.” Aegis was ranked as the 6th largest global BPO company in India by Nasscom in FY2014. [see table: NASSCOM Top 15 BPM Exporters in India FY2014]

Funding the Next Phase of Growth

It is noted that Essar got out of the US, Philippines, Costa Rica business on handsome terms, a 7x multiple. But it was not purely a deal with financial goals. Essar wanted to finance the next phase of growth in the BPO business. For this, the company looked at various options of raising equity and it had all options related to recapitalizing its equity base open. These included IPO, strategic partnership, and stake sale. Sources reveal that Essar was in talks with CIMB Khazanah and other private equity players like KKR, Bain, and CVC amongst others for a possible 100% monetization of assets but did not dilute its equity due to mismatch of expectations.

The US is a major market that every BPO player is looking at. In fact, nearly 62% of revenues for the India-based BPO companies come from the US. The primary growth driver for the US business is centered on Philippines. But Philippines is getting saturated. Says Sen, “There is a demand-supply mismatch, the costs are rising, and there is a hurricane almost every month that disrupts business. US clients are jittery about services being delivered out of Philippines. In short, Philippines has reached an inflexion point.” 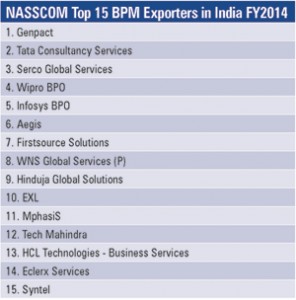 Sen admits that growth has been good in the US and Aegis itself grew nearly thrice over, but the growth is not sustainable. Margins will also continually go down, fears Sen. The strategy think-tank at Essar which included Sen decided that it was the right time to move out the maturing US market and instead focus on newer and emerging markets where Aegis will have the first mover advantage. Examples include Asia Pacific, Middle East, and Latin America. Also, the large outsourcing companies were still focused on the Western markets to the point of distraction, Sen reveals.

Wasting no time, the company forayed into Malaysia by acquiring Symphony and is convinced that Malaysia has huge potential to grow; in fact, the company even suggests that Malaysia would be the hub of the APAC operations. While the company continues to handle the shared services and back office BPO business in the US, it is actively looking at nearshore business from Jamaica and Dominican Republic. In the Middle East, Saudi Arabia is a high growth market. Similarly, South Africa and UK are high thrust areas for Aegis.

Voice-based processes still account for over 70% of the business, but the faster growth is coming in from new areas like HR, F&A, and social media, says Sen. Aegis is looking at Japan and Korea too, but it is more likely that it will enter these markets through the inorganic route. Aegis counts itself as the largest in the domestic BPO business catering to the Indian market. Every nationalized bank is our customer, claims Sen. E-commerce is another high growth area growing at 20%; Aegis is a partner for customer services management for Flipkart. Sen avers that though the Indian market is highly competitive and fragmented, Aegis is able to command good margins because of scale.

Posted by: Ed Nair
View more posts
Financing the Next Phase of Growth 0 out of 5 based on 0 ratings. 0 user reviews.
Infibeam Introduces Logistic Platform for Merchants
“Improving Customer Experience”

VMware and IIT Bombay state that an investment of USD $240,000 will be made in…