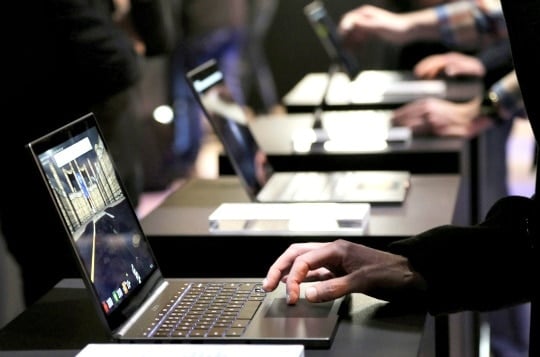 FY 2017 was a challenging year as the overall PC market went through a rough phase. As we take an audit of the PC market for FY 18. According to Dataquest estimates, for the year ended March 2018, the total India PC shipments stood at 9.8 million units, signifying a 9% growth and much-needed revival.

As usual, the market saw the routine issue- Quarter on Quarter decline/growth and sequential pressures. While AMJ 17 was probably the worst quarter with a big decline, the segment bounced back with a bang in the JAS 17 quarter, making up for the loss in the previous quarter.  What happened in the AMJ 17 quarter was majorly due to the impact of GST and as a result, the PC market saw a decline in shipments.

According to data available from IDC and if we look Q1 CY 18 ( Q4, FY 18) in its Quarterly Personal Computing Devices Tracker 2018, the India traditional PC shipments for 2018 Q1 stood at 2.35 million units, with a 9.9 percent decline quarter-on-quarter and 8.2 percent growth over the same period last year. The consumer PC market recorded an overall shipment of 1.08 million units in Q1 2018, with 10.9 percent sequential decline and a 3.2 percent increase compared to the same period last year. The overall traditional commercial PC market stood at 1.26 million units in Q1 2018 with a decline of 9.1 percent quarter-on-quarter but saw a growth of 13.0 percent year-on-year compared to Q1 2017 on the back of a few state-owned education projects.

Commenting on the Top 3 Company Highlights for the Q1 CY 2018 quarter, IDC made the following observation:

HP Inc. took an early lead in 2018 and achieved a market share of 28.6 percent in Q1 2018. The company reclaimed its top spot in overall India traditional consumer PC market with a 29.9 percent market share, with 7.5 percent sequential growth and 6.7 percent year-on-year growth driven by strong consumer-focused initiatives, widespread retail presence and continued to focus on gaming systems which have injected growth for the vendor in the category.

Dell slipped to the second spot with a 23.2 percent market share in the overall India traditional PC market in Q1 2018; clocking a year-on-year growth of 11.9 percent and a sequential decline of 26.1 percent. The commercial business in Q1 2018 contributed 54.8 percent share, which was driven primarily by reenergized GTM approach with channel-enabling initiatives to strengthen channel and partner-led business. The vendor’s efforts to enable digitization and assist in the deployment of new applications in newer areas of the offering has contributed to the growth in verticals like Government and BFSI in Q1 2018. 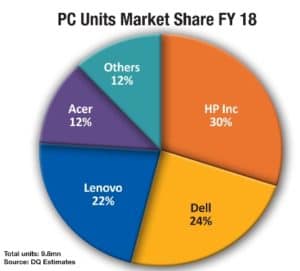 Lenovo took the third spot, recording a market share of 21.7 percent in Q1 2018 in overall India traditional PC market. With increasing focus on social media engagement driven by dedicated service campaigns along with channel support initiatives with better incentives has brought in confidence in the channel partner community. This led to a 16.7 percent growth year-on-year and 16.9 percent growth quarter-on-quarter in Q1 2018 for the overall consumer market. The vendor’s efforts around enterprise focused customer solutions coupled with new generation devices helped in in retention of key accounts, which led to a 45.1 percent year on year growth in the commercial segment.

IDC anticipates the PC market to get a boost in 2018 on the back of positive business sentiment and an expected rise in consumer spending in addition to upcoming manifesto projects across few states.

The consumer spending is anticipated to rise across innovative form factors like convertibles and ultra slim. Consumer segment is also expected to see traction around gaming devices as OEMs will be looking to invest and create excitement around the gaming category. In the commercial segment, IDC anticipates growth over the next few quarters as the industry will look to deploy new and powerful devices to meet the evolving technology requirements across verticals. With pro-business policies, the emerging industries in the medium and large segment will look to increase their commercial spending.

While the overall outlook is one of cautious optimism, but much depends on the revival on commercial space. Vendors clearly need to up the ante on booming verticals such as Education and Government, which is expected to drive the revival in 2018. Interestingly in the notebook segment, increasingly the lines are blurring between a consumer and a commercial notebook.

In all, the  PC market as a segment overall is expected to go through radical form factor innovations over the next two years and this will help in the overall revival process.

Today, industries are reshaping and reimaging what they make and how they do it. Virtual…