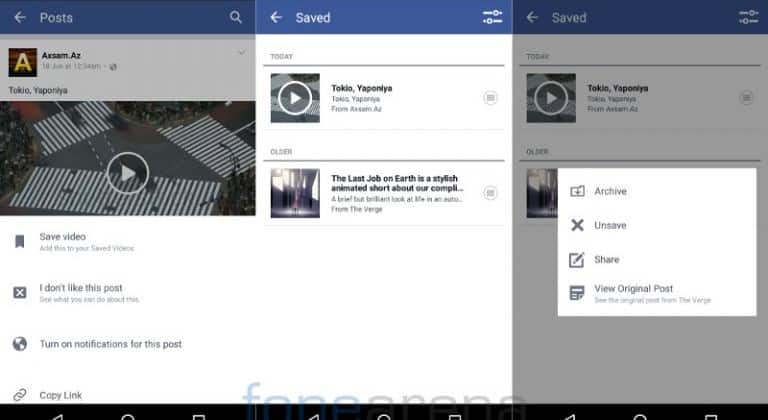 If Facebook’s CEO Mark Zuckerberg’s recent announcement is to be believed, then this could be news of joy for the Android users, who use the official Facebook App on their smartphones.

After YouTube’s successful attempt to allow the users to view videos without using the Internet, the social networking giant has now started to test the similar facility to its Android users, who are using the app. It is currently working on the feature to allow users to download videos over Wi-Fi or mobile data and to view them later, as per user’s convenience.

As per this roll out, Facebook will now allow its clients to download the video and watch it later with no web connection. Not long ago, Facebook has started this offline video highlight in India last year. However, the feature is now only available on Facebook Beta version 85 and 86 for Android.It is reported that this feature will be more beneficial for 2G users.

“Despite the cost of downloads, an estimated 40% of data consumption on phone networks is video, said Nikhil Pahwa, editor of Medianama.com, which monitors the news on the digital industry. “This will only keep going up, as the Video is the format of the future in a country where people devour videos everywhere – at work, on the streets and in their homes.

If you like a video on Facebook and want to save it for later viewing, you have to download it first. To do this, you need to tap on the three dots found on the right and then have to select the Save Video option.This will download your desired video, either to your phone storage or the memory card storage, depending upon the settings done on your smartphone.

Once saved, you can find the clips on Facebook App, which you can enjoy without the internet access. If you want to remove the videos from your App, simply long press on the Unsafe button option and the video will be eliminated from the list.

Facebook’s move will attempt to gain users from third-world countries particularly, where the internet connectivity and the internet penetration is quite low. Despite advancements made with the Internet today, with high optical fibres being installed at many cities over the world, it becomes a financial burden for the government in the long run. The move followed feedback from users citing poor video experiences because of limited mobile coverage.

In many emerging markets like India, mobile data and connectivity are limited, which can leave people with poor video experiences or no streaming ability at all. Zuckerberg’s aim is to ensure that the people see and make the video experience on Facebook great for people in all parts of the world. This will ensure a great user experience and allow your video content to reach new audiences.

While India and some countries in Africa will receive this new feature by next month, it is not yet revealed that whether the same would be extended to all other countries in the near future. Also, it has been not yet revealed that whether this service would be extended to the new Facebook Lite App, launched for the purpose of accessing the social networking site in slower and older networks, such as 2G and 3G.

But whatever it is, it is a good start by the company to regain the customers in the Asian and African continents particularly, who were presumably lost, because of not being able to stream and see videos properly. For observers, this would be a cut-throat competition between Google and Facebook.

Also, watching uninterrupted videos leads to a better clarity and understanding of an issue and as a good medium for educational purposes. It is also theoretically engaging, grasps user content well and has a higher perceived value, as compared to text.