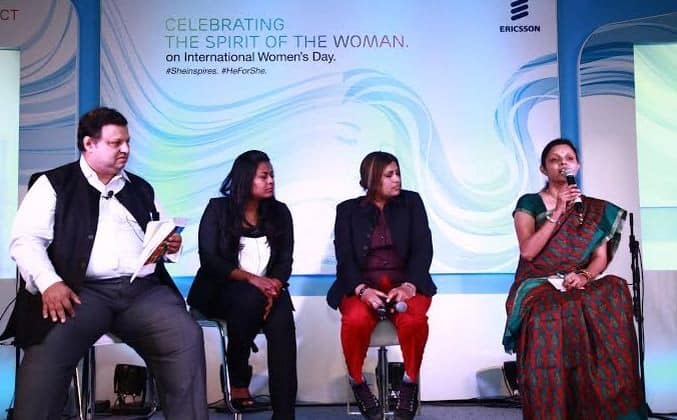 Ericsson celebrated International Women’s day by organizing an event to commemorate the achievements of ordinary women who have followed their dreams and fulfilled their ambitions to carve a niche for themselves.

Creating a workforce, culture and environment where everyone, regardless of their individual differences can succeed and contribute to their full potential, is a key priority for the company.

The event started with a keynote speech by Chris Houghton, Head of Region, Ericsson India on Importance of diversity and Inclusion. It was followed by ‘Inadvertent Feminist’- a song inspired by the famous speech on gender equality, by Emma Watson- sung by Suraj Mani, former front-man of alt-rockers Motherjane.

Post that an interesting panel discussion on gender equality and women empowerment was organized. The panellists, Anuradha S. Prakash – Operations Director- ISRO, Capt. Indraani Singh – Asia’s first woman commercial pilot, Kanika Tekriwal – Founder of JetSetGo shared their personal experiences, challenges and how they overcame those.  It was an engaging session where Ericsson employees asked questions on variety of issues.

A riveting performance by Vilas Nayak brought the event to an end. He speed painted with both hands, picture of a woman to thebeats of music.

Ericsson also encouraged its employees to take a pledge for #HeforShe- a solidarity campaign for gender equality initiated by UN Women.

Chris Houghton, Head of Region, Ericsson India, says, “At Ericsson, we believe in having a Culture that entails equal opportunities for all, a culture where employees are limited only by their own ambition and a culture where women feel truly empowered to perform to the best of the abilities. And this thought has been the genesis of the Blue River Project, a campaign that seeks to open the mind of our employees , men and women alike , to new thinking and experiences that may challenge their ways of thinking but forces them to think about their own approach .. And that to my mind will lead to the creation of a more Diverse yet Inclusive culture at Ericsson.”