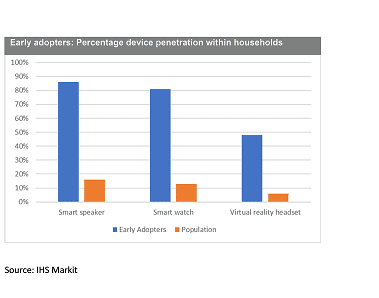 The early adopters represent a select group of high-income individuals who purchase cutting-edge electronic products in greater volumes than other categories of people, which consist of mainstream buyers, accumulators and validators. The concentration of devices ownership in the early adopter group indicates that the market for VR headsets, smartwatches and smart speakers remains limited to a small number of users.

“When it comes to acquiring the latest technology, early adopters dramatically outperform all other types of consumers, including mainstream buyers, accumulators and validators,” said James Allison, principal analyst, consumer devices, at IHS Markit. “Out of the 12 device types inquired about in the IHS Markit survey, early adopters reported they have access to 8.6 devices per household. This compares with just 3.6 for mainstream households.”

Going beyond the early adopters
The survey results show the challenge that makers of cutting-edge devices like VR headsets, smartwatches and smart speakers face when trying to expand the appeal of their products beyond these rarified buyers and into the realm of mainstream consumers.

Despite the huge amount of attention lavished upon VR headsets, smart watches and smart speakers, the highest-volume-growth phases for these products still lie in the future. For example, global smart watch production is expected to more than triple in the coming years, rising to 92.8 million units in 2023, up from 30.7 million in 2019, according to IHS Markit. Meanwhile, production of smart speakers and digital assistants will soar to 248.6 million units in 2023, up from 104.4 million this year.

“During the next few years, the successful sellers of VR headsets, smart watches and smart speakers will be those that can demonstrate the value of their products to everyday people,” Allison said. “A combination of declining prices and increasingly compelling capabilities will be critical to attracting a larger audience. Brands need to closely watch early adopters’ usage of these devices to understand how they will be utilized by more mainstream consumers in the future.”

Early adopters first
Early adopters accounted for just 8 percent of the population in the countries surveyed, which consist of the United States, the United Kingdom, Japan, India, Germany, Canada, Brazil and Australia. In five out of the eight countries, early adopters ranked as the smallest group. The other groups consist of mainstream consumers, accumulators and validators.

Early-adopter consumers have higher incomes than the other groups surveyed, with 47 percent earning annual salaries greater than £45,000 in the United Kingdom, and 58 percent pulling down incomes between $60,000 and $149,000 in the United States.

With the high availability of devices in their households, early adopters often engage with new device types immediately after they launch.

Smartwatch ownership is largely concentrated among early adopter households, with 80 percent of them having access to a smartwatch. Penetration is less than 15 percent across all other groups with mainstream households least likely to own one, at just 5 percent penetration.

Meanwhile, nearly half of early adopter households have access to a VR headset, compared to less than 6 percent for other groups.

Oculus, a virtual reality subsidiary of Facebook has lost half a billion dollars in damages…

Lenovo launched the all new power packed Lenovo P2, designed to keep up with your…

One response to “Early adopters lead in ownership of VR headsets, smartwatches and smart speakers​”