In recent years, there have been several complaints of how some items got added to customers’ cart on popular e-commerce sites, without them having any clue about it. Another common complaint is how upon logging into the inbox, a person finds out that all his/her contacts have been spammed by none other than the person himself. It is these sneaky and at times malicious actions that are referred to as ‘dark patterns.’

Harry Brignull (PhD, Cognitive Science), a London-based UX designer, was the first to coin the term in August 2010. He defined it as: “A user interface that has been carefully crafted to trick users into doing things, such as buying insurance with their purchase or signing up for recurring bills.”

It’s no secret that many popular e-commerce retailers use dark patterns to benefit their business, purposefully making it harder to get out of this labyrinth. Social and casual gaming platforms also use dark patterns blatantly to their advantage – accidental in-game currency spends, buttons placed awkwardly close together or game tasks that are impossible to complete without spending game currency or cash.

As designers, they have the power to influence how people use a certain product and with this great power, comes great responsibility. It is the job of the designers to create seamless and delightful user experiences and dark patterns do the exact opposite.

More often than not, designers are caught in the middle of the business and the users. Business needs often take the front seat and it is at this point that the designers are faced with the dilemma of either helping businesses meet their OKRs or be the voice for the users.

In such situations what can a designer do? Where can the line be drawn? What should their UX code be? There is no definite solution but two approaches present themselves here.

Many professions have a code of ethics as their guiding principle. This is the first step. The use of dark patterns is in no way ethical. There is a need to design with the intent of creating something that both meets business goals and is socially responsible. Aral Balkan and Laura Kalbag, the founders of ind.ie, outline an ethical hierarchy of needs that describes the code of ethical design in the digital age very well: 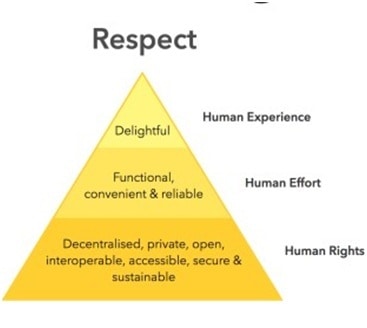 The Ethical Hierarchy of Needs (Licensed under CC by 4.0; Source: Ind.i.e)

The lower layers of the pyramid support the ones above them. If one of them fails, those above them fail too. So if a design does not support human rights, it is unethical. If it adheres to human rights but not human eﬀort (easy to use), once again it is unethical. Finally, if it respects human eﬀort but not human experience, for example, if a UI is purely functional with no user delight like positive feedback or UI interactions to create a better user experience, it is still unethical.

Now that this first basic step is covered, the next step would be to design with the three layers in mind. But that is not enough to make a product worth using, is it? Even with the right aims and desires, the product would still need to attract an audience. This is where the second step comes into play.

“Persuasive design, when used responsibly, can leverage a good understanding of cognitive science to add value to a user’s experience and increase user engagement.”

This means that the designers should use design patterns for good. If an action that the user intends to take is made easier, it is essentially the right use of UX practices. The Fogg Behaviour Model by Stanford University’s BJ Fogg illustrates this idea very clearly: So according to the graph, the best patterns lie where there is high motivation or need from the user and the need is met by accomplishing a simple task. For example, in the well-known language app Duolingo, the user is reminded each day through pop-up notifications “You are going to drop in the leaderboard”. This kind of competitiveness urges the user to keep using the app, but the results in such cases are positive as it is being used to help motivate the user to learn the language. Such persuasive techniques do more than just make a person use a product.

What is the learning here?

Products are initially created (in most cases) for the right reasons. A user has a problem, designers and engineers find that problem, solve it through developing a product and sell it. But in the midst of it all, other motivations that are not aligned with the user’s needs can fog the real reasons behind that product. Dubious upselling may start to litter the experience with sneaky checkboxes and 8 pt. fonts obscuring the real agenda.

While these dark patterns could generate results in the short term, the eventuality that doesn’t often get highlighted is that users will wise up to them and once that happens, the integrity of the company behind these patterns is laid bare, even prompting the users to switch to the competition. Now that’s something to think about, isn’t it?

Posted by: DQINDIA Online
View more posts
Have e-commerce sites gone dark? 0 out of 5 based on 0 ratings. 0 user reviews.
Accenture to acquire Mudano to enhance its artificial intelligence capabilities
Five IIITs in PPP mode to be declared as Institutions of National Importance: Union Minister

How AI and IoT increase efficiency and productivity of an organisation

With digital transformation gaining traction and the acceleration of next-gen technologies such as IoT, blockchain,…