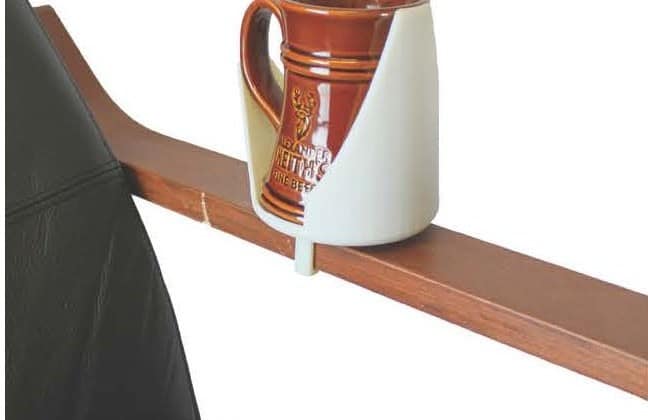 Want to mount a smartphone on your car’s dashboard? On the arm of a chair? On your guitar? The choice is yours with a new method invented at Disney Research that automatically designs a custom connector that can then be produced with a 3D printer.

Called AutoConnect, the method is able to attach together a wide variety of objects, including objects with standard shapes, such as pipes, flat surfaces or boxes, as well as free-form objects, such as game controllers, toy animals, or coffee mugs.

Users choose the items they want to join, indicate how they should be aligned and provide information, such as size and weight. AutoConnect then generates several alternative designs that connect the items securely. The user can then select the one that looks the best or otherwise best meets their needs.

“The promise of 3D printing is that people can personally create customized objects, but it’s often a difficult promise to fulfill because 3D objects can be so hard to design,” said Jessica Hodgins, vice president of Disney Research. “That’s particularly true for connectors, so we think AutoConnect could become an important and valuable tool as the 3D printing revolution continues to grow.”

The researchers will present their AutoConnect method at ACM SIGGRAPH Asia 2015, the Conference on Computer Graphics and Interactive Techniques, Nov. 2-5, in Kobe, Japan.

“One solution to the problem of 3D design has been the creation of online design repositories,” noted Shinjiro Sueda, a post-doctoral researcher at Disney Research. “For instance, there are many designs available online for attaching smartphones to bikes. But finding designs for connecting less common objects can be difficult if not impossible.”

Sueda and his colleagues have developed a set of mechanical holders for an array of objects, which can be altered in size or strength depending on the size and weight of a specific object, as well as a set of strategies for connecting these holders together. In addition to holders for standard-shaped objects such as tubes, boxes and flat surfaces, they also developed a design method for creating holders for oddly shaped objects.

The user must first provide 3D models for both objects to be connected – models that can either be downloaded from the Internet or created using a 3D scanner. Using these virtual models, the user then shows how the two objects should be aligned when connected. The user also can specify if there are areas of the objects that cannot be covered – such as the face of a smartphone – and if the object can be slipped out of its holder or secured tightly.

With those specifications, along with information such as size and weight, AutoConnect generates several alternative designs. “The user provides the ‘what’ and ‘where,’ and AutoConnect determines the ‘how,'” Sueda said.

For free-form objects, AutoConnect designs a holder by selecting a “seed point,” located symmetrically on the object, and then iteratively expands the area of the shell along the object’s surface until the number of contact points on the object meets the design criterion for holdability and grip. Alternatively, for an irregularly shaped object such as a coffee mug that is meant to be held loosely, the target shape of the holder can be based on the object’s “convex hull,” an envelope that would enclose the entire object.

If the holder is designed to hold an object tightly, AutoConnect automatically divides the holder in two and adds snap connectors to hold the two pieces together.