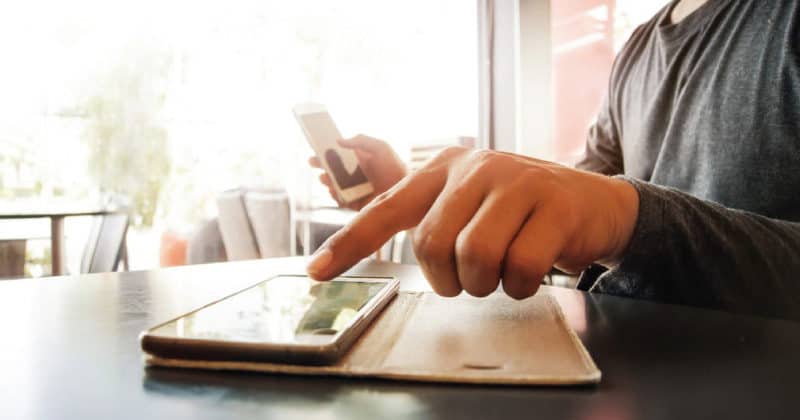 Consumers all over the country have been embracing digital payments like never before. With COVID-19, contactless and cashless transactions have become the preferred choice among consumers and merchants alike.

While consumers are ordering groceries and paying utility bills through e-commerce modes from home, retail and online merchants are deploying multiple frictionless and asset-light solutions.

The European leader in the payments and transactional services, Worldline, which analysed Indian digital transactions available in public databases as well as transactions processed by themselves in (July-September) Q3 2020, corroborated that and showed several payment products witnessed V-shaped recoveries during that period.

“The Reserve Bank of India has announced several initiatives to enhance the digital payments space in India; the opening of the first cohort under the regulatory sandbox with ‘retail payments’ as its theme, setting up of a self-regulatory organisation for payment system operators, streamlining QR code infrastructure and setting up of the Reserve Bank Innovation Hub among others.

Now, for digital payments to increase in a sustainable way, merchants across the country need to have the infrastructure to accept all payment instruments. But the Points of Sale (PoS) infrastructures in India still are concentrated in the larger cities only – largely because of cost issues related to both logistics as well as low usage by merchants outside such cities. A Payment Infrastructure Development Fund (PIDF) could break that barrier down.

On June 5, 2020, the RBI announced the creation of a PIDF to encourage acquirers to deploy PoS infrastructure (both physical and digital modes) in underserved areas such as tier-3 to tier-6 centers and the northeastern states. The size of the fund is to be Rs 5 billion with the RBI putting in half and the other half to come from the card schemes and card issuers.

There is optimism that this fund could provide that much-needed fillip to the PoS infrastructure in the country. Citing a similar instance, Sunil Rongala, VP-Strategy, Innovation and Analytics, Worldline, explains, “To understand the potential impact a fund like this can make, we need to look at Malaysia where a Market Development Fund was introduced in 2014 with the primary aim of increasing the number of PoS terminals in the country – the goal set was to reach 800,000 terminals in 2020 from 233,000 in 2014.

Malaysia, of course, is far smaller compared to India and its population is about 33 million compared to 1.3 billion in India. It is also worth noting that the Malaysian fund was expected to channel RMB 455 million (Rs 8.25 billion) which is significantly higher than the fund announced in India, he added.

Here are some unique digital payment-related insights derived by Worldline.

In Q3 2020, there were over 5.18 million PoS terminals deployed by merchant acquiring banks, up 13% as compared with Q3 of the previous year. There was a mild dip in the number from March 2020 but in September 2020, it crossed the March number of 5.13 million.

Overall transactions at physical touchpoints in Q3 2020 were up by 40% in volume and 51% in value as compared with Q2 2020. For Worldline India, at physical touchpoints, groceries, petrol stations, clothing and apparel, specialty retail, pharmacy, and medical, restaurants, and departmental stores together accounted for 65% in terms of volume and 55% in value in Q3 2020.

In the online space, e-commerce (shopping for goods and services) and the education sector contributed to 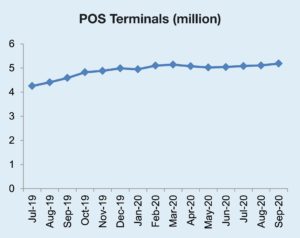 over 65% in terms of volume and value in Q3 2020. An observed trend is that the travel and hospitality sector is witnessing growth with each passing quarter. The increase in debit card issuance can be attributed to a significant number of new accounts opened under the Pradhan Mantri Jan DhanYojana (PMJDY) scheme. About 5.68 million RuPay cards were issued to PMJDY beneficiaries via banks under the scheme in Q3 2020. Replacement of magnetic stripe cards with EMV chip cards to existing customers, upgrade to contactless cards, pent-up demand for card issuance post lockdown, and business as usual could be other reasons for this rise. 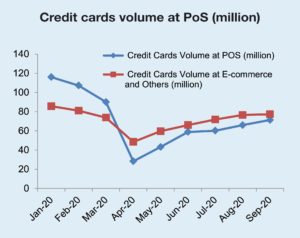 Prepaid card transactions volume and value in Q3 2020 were 275.60 million and Rs 98.64 billion respectively. Prepaid cards, which are primarily used for online transactions rather than physical merchant places, recorded 15% growth, while the number of mobile wallets saw an uptick of 4% in Q3 over Q2. However, the value of transactions is 33% lower compared with the same period of the previous year though there is a recovery happening from the low seen in April 2020.

Transactions through mobile wallets are also growing steadily. The number of transactions through them in Q3 2020 was 727.91 million and the value was Rs 391.05 billion. This includes the purchase of goods and services and fund transfer through wallets. In Q3 2020, it recorded a 4% increase in volume over Q3 of 2019.

However, the value of transactions is 33% lower compared with the same period of the previous year though there is a recovery happening from the low seen in April 2020. 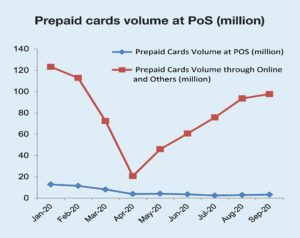 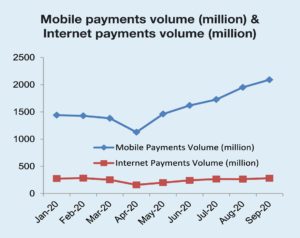 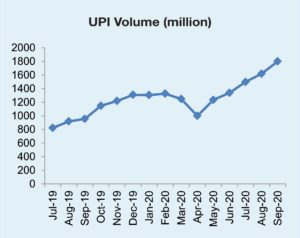 Nineteen banks joined the UPI ecosystem in Q3 2020 bringing the total number of banks providing UPI services to 174 as of September 2020 while the BHIM app from the National Payments Corporation of India (NPCI) was available for customers of 146 banks. The number of BHIM app downloads stood over 158 million as of October 13, 2020.

NPCI has taken some initiatives like the creation of secondary/backup UPI ID to improve customer experience, guidelines on the usage of UPI APIs, merchant system enhancements, and introduction of B2B as a separate category among others in the recent past. NPCI has recently given approval also to WhatsApp to go live with UPI in a graded manner, starting with a maximum registered user base of 20 million.

It has issued a cap of 30% of the total volume of transactions processed in UPI, applicable on all Third-Party App Providers (TPAPs) effective from 1 January 2021. However, the existing TPAPs processing over 30% of transactions will get a period of two years from January 2021, to comply with the norms. 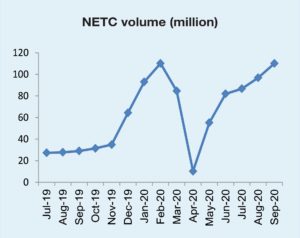 The Union Ministry of Road Transport and Highways has taken several measures to make Fastags mandatory. Fastag has been made mandatory for four-wheelers from January 1, 2021. Moreover, Fastag has been made mandatory for new third-party insurance with effect from April 2021 and even the renewal of the fitness certificate will be done only after the fitment of Fastag for transport vehicles.

NPCI is enhancing NETC enabled use cases like contactless and interoperable parking solutions in major cities. 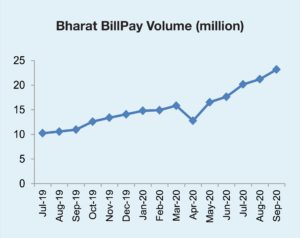 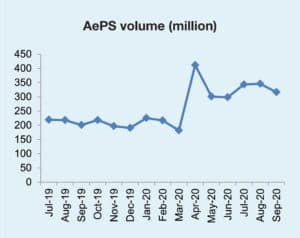 It facilitated government direct benefit transfers (DBT) to beneficiaries during the quarter and several banks provided services at the customer’s doorstep through BCs.

RBI’s initiatives are welcomed as they are expected to leverage technology, spur innovation, enhance system efficiency and strengthen acceptance infrastructure.”

Posted by: Soma Tah
View more posts
Digital money is making the world go round 0 out of 5 based on 0 ratings. 0 user reviews.
ABB launches next generation cobots to unlock automation
New IT Rules: Grievance Portal to Be Launched to Register Complaints on Social Media and OTT Misuse

Agriculture 4.0 and the future of farming technology

How digital tech is set to transform business operations?

We are progressing through the New Normal, wherein global businesses are aiming to transform themselves…

Cyien announced the launch of its INTELLICYIENT suite of Industry 4.0 solutions that will enable digital transformation…