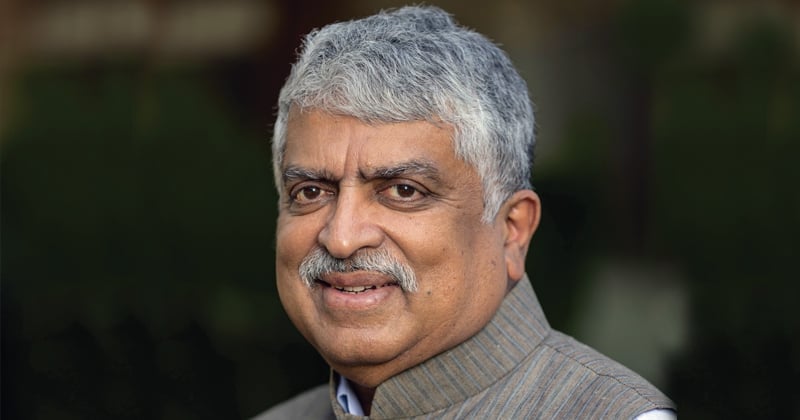 Nandan Nilekani, Chairman and Co-founder, Infosys and Founding Chairman UIDAI (Aadhaar), gives a bird’s eye view of India’s digital initiatives and how they will all contribute to smart governance. Excerpts from the video interview…

Can you tell us what was the status of Digital India in 2019 and what kind of transformation happened during the pandemic era?

Many of the building blocks of Digital India had already been laid out in the last few years. During the pandemic, you had to do everything digitally. You met people digitally, you did your work digitally, you ordered products digitally, you got your food delivery done digitally, and so on. What the pandemic did was accelerate existing trends. Digital India has really been a spectacular success. For the first time, we have things like the JAM trinity (Jan Dhan-Aadhaar-Mobile). The mobile phone’s success is well known. We have over a billion phones and maybe 600-700 million smartphones. We have the cheapest data rates in the world that have allowed people to use unlimited bandwidth on their devices.

But we also had the Aadhaar project which I led for 5 years and today we have 1.3 billion people on Aadhaar. That’s also the basis for linking bank accounts. There are more than 700 million Aadhaar-linked bank accounts. That provided the fundamentals for the largest cash transfer in the world. All these pieces of the puzzle had been laid in place. What the pandemic did was show the power of these kinds of tools. For example, the government was able to use the DBT (Direct Bank Transfer) to give funding to vulnerable populations running into hundreds of millions. Essentially Digital India came in very useful and was strategic when the pandemic struck.

How do you look at the long journey of Aadhaar from inception to where it has reached today?

When Chandrashekhar was the IT Secretary, before he went on to become the NASSCOM President, he had laid the foundations for so-called Mission Mode projects. Many of the early projects like the passport ones were all part of that. One of the projects was the ID project which I took up in 2009. People didn’t really fully grasp the importance of and the strategic value of a digital ID.

We were able to build this very sophisticated technology that gave everybody a digital ID. They could verify it online. By the time I stepped down in 2014, it had reached 600 million and the usage had just begun. I had a meeting with Prime Minister (Narendra) Modi as soon as he came into power, and he became a big enthusiast and supporter of Aadhaar and the JAM trinity. The new government took it even further. Then we had the Jan Dhan program. What it shows is that once you start putting the building blocks in place, then they get used. India is the best place in the world for the demonstration of what we call digital public goods.

While Urban India has gone far, what about rural India and schemes like BharatNet which promises high-speed Internet networks in villages?

I think rural is equally important and there are many initiatives, and one, of course, is BharatNet which is using the USOF (Universal Service Obligation Fund) to lay networks in rural India and I believe it’s reaching many more villages. Then we have CSC or Customer Service Centres which are across all the towns and people can go there and get services done or get a certificate printed. There’s been a rise of online business banking correspondents in rural India thanks to mobile connectivity. Today we have a few hundred thousand banking correspondents who are able to both open bank accounts in rural India as well as allow people to withdraw money.

Rural India can also avail of the Aadhaar enabled payment system. We’re talking about 90 million transactions a month worth Rs 25,000 crores. Similarly, if you look at IMPS, which is the NPCI platform for crediting money that is primarily used by migrants, that does some 420 million transactions in a month with a value of 384,000 crores. So we really now have major schemes that are targeting rural India.

What about other schemes like Make in India and Startup India which are also an integral part of Digital India?

When you look at Digital India, there are three facets to it. The first facet is what we just talked about, that India is building a large set of digital public goods, be it Aadhaar, UPI, account aggregator, FASTag, Cowin, etc that are enabling the largescale implementation of technology.

The third leg of this is the startup world. I think there were more startups last year that became unicorns than all the unicorns in the years preceding that. Startups are going to be a huge source of innovation, job creation, and solving India’s pain points.

What about HealthTech and AgriTech? Do we have a long way to go?

I think we are on the way. I think in some sense Covid also did an acceleration of HealthTech. For example, the National Health Authority CEO Ram Sewak Sharma was with me earlier at UIDAI as DG. He’s leading the charge. India is the only country in the world that has issued 1.8 billion digital vaccination certificates, which you can store on your phone, take a hard copy, or store on the cloud in your DigiLocker, fully verifiable. With the Ayushman Bharat Digital Mission, we are looking at creating a universal health record that allows you to take your health records, and make them portable, very similar to how UPI is in payments. I am confident that NHA (National Health Authority) and the Ministry of Health will go a long way in improving health using technology, along with many startups.

On the agri side also we are seeing a lot more activity. It’s probably not yet at the scale we would like, but many agri startups are proving better inputs to farmers. They are improving the supply chain. One company I’m involved with called Ninjacart is the largest B2B supply chain for fruits and vegetables in India. So suddenly you are seeing tech being applied to agri. I do hope that will continue because that will be a key part of getting India into a modern economy.

What about smart infrastructure projects? How is technology being used there?

Our modern ports are processing a few hundred million tonnes of cargo all the time. Our airports are getting world-class and they are being privatized. Many cities are getting much better digital infrastructure. One of the foundations that I support, eGov Foundation has helped in creating an open-source platform for cities to use, so that all of them have a digital platform for their accounting, building plans, approvals, and so on. Technology is also permeating the infrastructure area.

All this together constitutes smart governance. Where do we stand in the world when it comes to this?

We are heading there. The fact that you could do the world’s largest cash transfer program in the pandemic is an example of smart governance. Today for example the FASTag is used on our highways and it does about 240 million transactions a month, and it collects Rs 100 crores a day digitally. Today NHAI and other collections are over Rs 40,000 crores a year. We are seeing smart governance permeating everywhere.

In education, DIKSHA is probably the world’s largest digital EdTech program used by the government of India. That’s why we call it the Techade, or the Tech Decade. I am convinced that by 2030, a significant part of India’s economic growth, social improvements, and per captia improvements will all be driven by technology.

What about emerging technologies?

India is actually a huge user of AI. AI is used in our Aadhaar authentication to make sure it is genuine. AI is used to catch tax fraud. AI is being used by the National Language Translation Mission to able to convert into 22 languages automatically: speech to text, text to text, text to speech, and so on. There aren’t that many applications, but the blockchain is being used. Cryptocurrency is a different matter, but there could be an RBI-issued CBDC or Central Bank Digital Currency that will use blockchain.

Posted by: Sunil Rajguru
View more posts
Digital India has been a spectacular success: Nandan Nilekani 0 out of 5 based on 0 ratings. 0 user reviews.
Future of consumer tech and after-sales in growing Indian market
Tezos India-Code8 collaborate for a 5-day blockchain awareness bootcamp