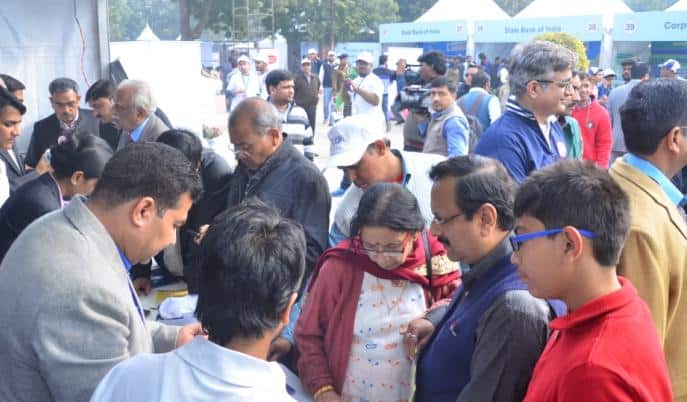 DigiDhanMela – a two-day awareness camp organized by the Ministry of Electronics and Information Technology (MeitY), that commenced on Saturday, 17th December, culminated  at Major Dhyanchand National Stadium, Delhi. The camp received enthusiastic response from the participants and visitors alike. The Mela was aimed at promoting and publicizing various digital payment options among citizens and merchants. The DigiDhan Mela also aimed to handhold users in downloading, installing and using various digital payment systems for carrying out digital transactions. The objective of the initiative was to enable citizens and merchants to undertake real time digital transactions through the DigiDhan Bazaar and encourage them to use digital platforms for day to day transactions.

The second day of the DigiDhan Mela saw substantial growth in the number of visitors. Especially, the enthusiasm of the students from schools and colleges was remarkable, who thronged the stalls in large numbers and enquired about various digital payment platforms available today. The participants of DigiDhan Mela explained the various digital payment options to visitors; they also assisted visitors in downloading and installing various mobile apps for digital payments and helped them do digital transactions. They also extended help to citizens for opening their bank accounts, to enrol them into Aadhaar and to enable their existing accounts into AEPS accounts. For example, over 2,000 State Bank of India accounts were Aadhaar-enabled in the camp.

Mr. K. C. Vyas, a senior citizen and resident of I.P. Extension, East Delhi said, “I was clueless about the concept of digital transactions and was not sure how to deal with the online banking options. But I am happy to have visited DigiDhan Mela and bank officials present here really helped me minimizing my doubts and I am now more confident of using online payment options.”

People could also purchase items of daily needs at the DigiBazar alongside learning the significance of making these transactions electronically. Kendriya Bhandar, the Government’s consumer cooperative society generated business to the tune of approximately INR 10,000, of which 80% was cashless. Whereas, Mother Dairy and Safal collectively did a 100% cashless business amounting almost INR 50,000 in these two days of DigiDhan Mela.

The UIDAI counter at the Mela created about 500 new Aadhaar accounts and registered over 2,000 new applications and NPCI (National Payment Corporation of India) has made almost 6000 people aware about USSD (, AEPS and RuPay card in a span of two days.

The DigiDhan Mela was supported by Nasscom Foundation, with over 90 volunteers who interacted with the visitors and explained them the need and ease of digital transactions. Prateek Sharma, one of the volunteers from Nasscom Foundation said, “There is a need for change advocacy, and I am glad to be a part of this initiative. I have been interacting with the visitors since last couple of days and addressing their queries. I sincerely feel that more such initiatives should take place in various other places to make people aware of how to operate in a less cash economy.”

A group of students from ASN Senior Secondary School, Mayur Vihar, echoed the sentiments of the majority of the visitors at the DigiDhan Mela. They said, “Digital payments are safe, convenient, easy to access, makes the people transacting accountable and is the way forward for the country.”

The Ministry of Electronics and Information Technology plans to follow up the DigiDhanMela by camps organised at state level and at bank branch levels. The Mela is primarily targeted at urban populace and looks to supplement the rural effort of promoting digital payments being led by the Common Services Centres.