Everyday, we make countless decisions prompted by the design of systems, software and experiences that we engage with. More often than not, we barely give these decisions a second thought. But user experience designers who are designing these experiences have their own world views that shape their designs and users are only making choices within the subset of decisions provided to them by the designers.

Design is about changing and managing perceptions and ideas about the world we live in. It’s powerful because when employed well, it works wonders as a way of wielding influence. This influence can broaden our horizons, make us aware of our hidden biases and even train good behaviour. Or, on the other hand, it can block progress and foster addictive and unhealthy behaviours such as providing positive reinforcement when we buy stuff we don’t need.

Design, regardless of the sphere it is employed in, can very rarely be objective. Yes, in a very basic sense, there is a choice to be made between an inefficient and an efficient set of user interactions, such as organising a login screen to require the least number of clicks in order to authenticate a user. But design isn’t like mathematics and there is usually more than one right solution to a problem. So while an inexperienced designer may be focussed on making choices between “efficiency” and “inefficiency”, a more mature designer may understand that fewer clicks isn’t the only way to evaluate a design. Instead, creating the right impression of “playfulness” is an important quality to convey as well and may actually design an experience that is less efficient but more memorable. Inevitably, the designer’s ethos, values and principles reflect in the creations and experiences s/he designs.

Take, for example, the software Adobe Illustrator. It has a very methodical approach, going step by step, ensuring that the user is faced with no surprises. If you are trying to close the application, a prompt asks you to save your last set of changes to the project. Or, if you tried to apply an effect that requires a great deal of processing power, the application tells you that it is going to take some time to perform this task. In this manner, the user is aware of every step that s/he is in at each stage. For people who have met Sreedhar, the designer who was part of the team that designed the user experience for Illustrator, this methodical approach that the application takes is very much in keeping with his personality.

Even when we take a careful look at a familiar building, we often know the thought that went into its structure and design. This is because it’s a physical manifestation of the philosophy of the architect. Whether it was Laurie Baker, the pioneering architect who believed in maximising space, ventilation and light or Charles Correa, known for his use of traditional methods and materials, the buildings they designed very much reflected their ethos.

While many designers strive to achieve an objective design, it is probably worth stating that they should pursue a path that reflects what their view of the world is instead. That’s the only way to be honest in your work. The way we think about design and the choices that we make have real-world implications. These perceptions are also reflected in the manner in which user experience designers conceptualise and treat the user.

The Servant of Two Masters

Apart from being driven by an inner voice, a designer also has to react to and make decisions about things that are placed in front of them by others. One main point of contention has to do with the fact that a designer is typically the servant of two masters. It is a field where the client is paying the designers to advocate for users and protect their needs and concerns. As a result, the designer is increasingly called upon to be aware of the dilemma of how far s/he is willing to listen to the client and where s/he would draw the line.

For example, in the UX design of a mobile banking application, one of the ways of authenticating a transaction is to use Aadhaar data instead of other methods of authentication. A way to speed up the process, in case the user returned a second time to perform a transaction, is to store a copy of the biometric data on the local device. A designer concerned with privacy and security may recommend a certain workflow for the engineers to implement and a designer who prioritises speed and convenience may suggest another.

Another example is of the choice of authentication mechanisms for logging into applications. Quite often face recognition has been touted as the solution to these problems, but will a designer account for women wearing a hijab, burqa or a saree to cover their faces? Will the designer’s political view of the world clash with that of the client’s and what choices will they make in that case?

Also, a common point is the identification of gender in most registration forms. Will they have the option to pick “third gender”? Would the designer believe that this is an important enough point to be forceful about its inclusion in the registration process? Would they stand up to a client who may feel otherwise? Will they know the decision made by the Supreme Court in this regard? This level of sophistication may still be a distant dream since many applications out there still use “sex” and “gender” interchangeably without understanding the distinction between the two.

I think it is important for designers to realise the influence they have on the world around them and the kind of impact they can have. I hope it fills them with the sense of responsibility they need to have when approaching their work. They’re no longer just designing a login form, or just creating an e-commerce website or just designing a service app. I hope they give it the respect their work deserves.

The only way for India to become a hub for design is to have more debates about the right approaches and hear multiple perspectives. The best place to start is for designers to be honest about who they are and what they stand for. Whatever their view of the world, however limited or expansive it is, they should express it. One may be afraid of losing clients, but in fact, the opposite will happen as they start to attract clients that want their kind of work. They will also differentiate themselves in a crowded market where designers are trying to be everything to everyone. 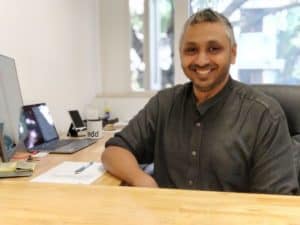 Posted by: DQINDIA Online
View more posts
Why Your Design Should Reflect Your Values 0 out of 5 based on 0 ratings. 0 user reviews.
empoWer 3rd Cohort Accelerates 30 Women Entrepreneurs with a Grand Demo Day
Dell EMC is Currently Number One in India in External Storage Market

The journey to a digital enterprise

I recently gave a keynote at a Cybermedia webinar on Digital Enterprise, which I am…

T-School Employability Index Survey 2021, which is a new study by DQ and CMR around…

Your tech dose from now: twice a day after meals

As per the Annual Technology Vision Trends Report, 83% organisations are accelerating transformation, 99% are…