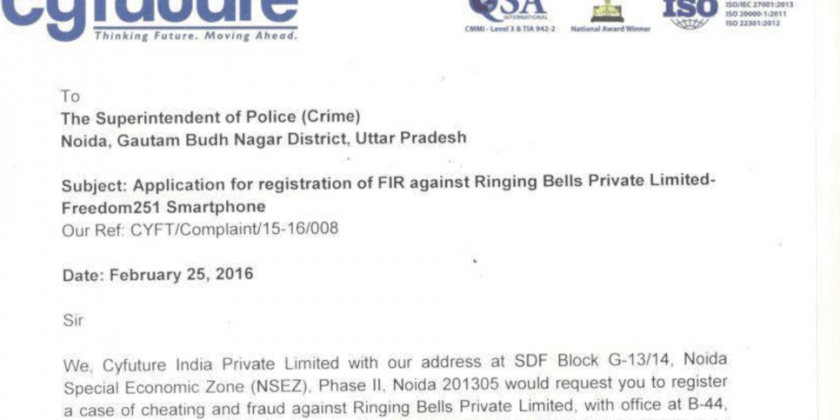 It looks like the cheapest smartphone company Ringing Bells would not enjoy an easy ride. After it got raids from the government tax departments, its partners are in open with blames. There are more controversies emerging. The latest one has risen up from its call center service provider Cyfuture which has dragged the company to the court for unpaid dues. Ringing Bells had earlier alleged of poor services and blamed Cyfuture. Clarifying on the allegations, Cyfuture has refuted the blames.

In response to Ringing Bells’ allegation of unsatisfactory services, Cyfuture has issued a statement defending itself. According to Cyfuture, the allegations are a result of their legal action against Ringing Bells. Cyfuture claims to have filed a case of cheating and fraud against the company which recently garnered headlines for launching the cheapest smartphone called Freedom 251.

Cyfuture has made public the contract it had signed with Ringing Bells.

Cyfuture is a provider of data center, cloud and outsourced support services to clients in e-commerce, retail, information technology, software services, education, banking and finance sector and government agencies. Our solutions help clients increase their productivity and performance whilst we efficiently manage their business critical IT infrastructure and business support functions.

NTT Ltd. in India announced the opening of its new hyperscale data centre campus in…