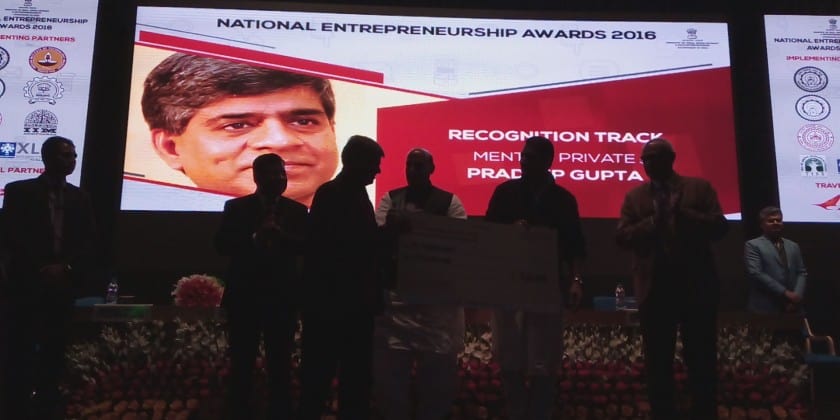 Pradeep Gupta, CMD, Cybermedia (India) Ltd. has been recognized as the premier Mentor for entrepreneurs in the Private categories at the National Entrepreneurship Awards 2016. The awards was handed by Home Minister Rajnath Singh and Rajiv Pratap Rudy.

A first-generation entrepreneur, along with his family members promoted Cybermedia in 1982. A B.Tech from IIT Delhi and PGDBM from IIM Calcutta. He is the main promoter as well as Chairman& Managing Director of Cybermedia (India) Ltd. Cybermedia Group, has media Brands including Dataquest, DQ Channels, The DQ Week, PCQuest and Voice&Data. Cybermedia is exhausting India’s first Electropreneur Park, an incubation centre for Electronics start-ups. He is also the Co-founder of Indian Angel Network, investing in 30-40 deals annually. He chairs the Alumni Trust, sponsors of IvyCap Ventures with corpus of $140mn for seriesA and on board of OOM Calcutta Innovation Park.

He was the global trustee of Tie, the World’s largest entrepreneurial ecosystem and served on Board of UTI AMC (AUM $20Bn) and its subsidiary UTI Capital, IIT Mandi and FITT. He was also a part Chairman of PanIIT India Association.

The other award winners are as follows: