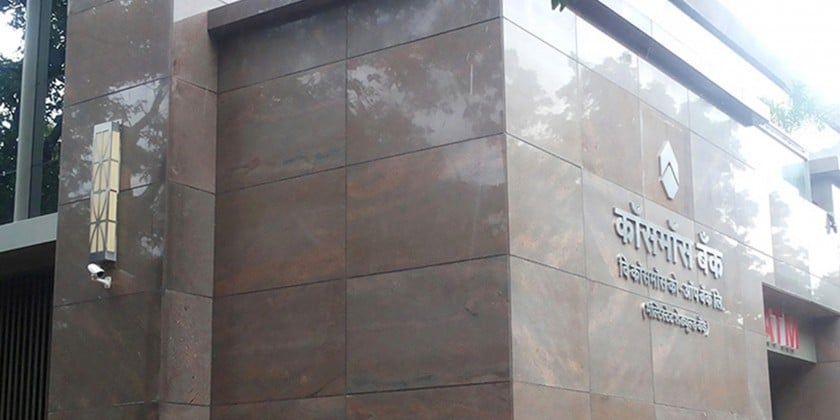 Facilitating effective monitoring using state-of-the-art security systems, Cosmos Co-operative Bank associates with VIVOTEK. The financial heart of the city of Pune has improved its security with VIVOTEK, the brand in IP surveillance security, to safeguard not juts its premises, but its greatest asset as well, i.e. Puneites.

Established in 1906, Cosmos Bank is the second oldest & second largest bank in India. Headquartered in Pune. It has a huge network of 140 branches in India, spread across 7 States and 39 major cities. Cosmos Bank is located on the University Road, which is at the very heart of this bustling city. Considering the size of the city, the number of inhabitants and the location of the bank, any security system for such an institution had to be both up to date, and ahead of the times.

Thus, in its risk mitigation plan, Cosmos bank decided to rope in VIVOTEK as its security solution provider. A total of 132 VIVOTEK network cameras were installed across the headquarters of the bank.

Speaking on the challenges faced, Sanjeev Gulati, India and SAARC Country Manager, VIVOTEK, stated, “The bank is headquartered in a building which has an inbuilt data center and a high security safe. As Pune, popularly known as the Oxford of India, is a typically dense and complex city, close to Bombay, a high level risk and threat assessment was done as a part of the overall risk mitigation strategy. The key areas that were identified include, threats to people; to property; and to the image of the Bank. Cosmos roped in Bajaj Electricals for the design, engineering and solution implementation. The need was ripe for a smart surveillance system that not only ensures the easy flow of pedestrians and vehicles but also guarantees the comfort of the employees and customers. Post extensive research revolving around compliance, security gaps etc, the bank chose VIVOTEK’s ace solutions as the ideal alternative which can meet all the chief challenges, facing Cosmos Bank.”

For the interior areas of the bank, including the main floor area, the lifts and the lobby, 103 FD8136 Ultra-Mini Fixed-Dome Network Cameras were employed. It features a megapixel sensor enabling viewing resolution of 1280×800 at 30 fps, while its tiny size of only 90 mm in diameter and an inbuilt microphone and speaker further enhances the powerful camera. The small profile and wide view of the camera is as good as large unsightly cameras when it comes to protecting Cosmos’s employees, customers and property.

Similarly, for the basement parking area, 29 IP8335H Bullet-Network Cameras were deployed. This camera features an HD WDR CMOS sensor for use in challenging lighting conditions. The day and night functionality and the IP67-rated weatherproof housing of the IP8335H allowed the bank a cost effective IP surveillance system. Incorporating an IR-cut filter that can be removed automatically at night and a built-in IR illuminators with coverage for up to 20 meters, the IP8335H secured Cosmos Bank’s parking area all day, every day. Finally, 4 SD8326 Speed-Dome network cameras secured the periphery of Cosmos Bank’s headquarters. This camera’s Veri-focal lens, IR and 36x zoom, empowered the Bank’s security team to identify and recognize objects and number plates, even in the dark of night, while its rugged housing ensured that bad weather would never mean a lapse safety Cosmos Bank’s real treasure, the people of the city of Pune.

VIVOTEK has announced its strategic partnership with Regenersis (India) Private Limited (A CTDI COMPANY), a…

VIVOTEK, the global leading IP surveillance solution provider, has upgraded its product portfolio with the…