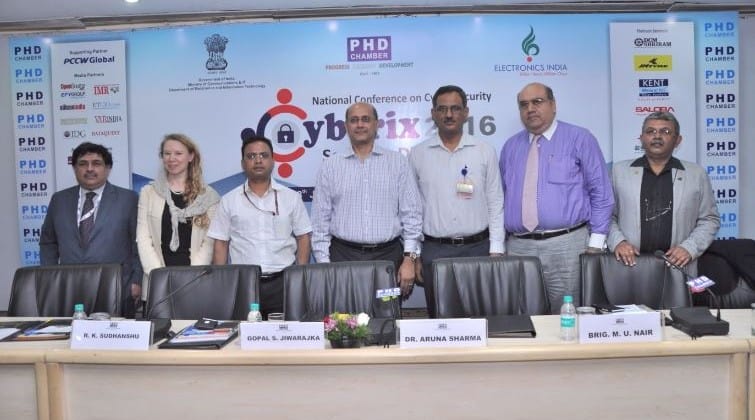 PHD Chamber in collaboration with DeitY ( Department of Electronics and Information Technology, Govt. of India) organized National Conference on Cyber Security ‘Cyberix 2016 – Securing Digital India’ on 8th July 2016 at PHD House, New Delhi. The Objective of the conference was to understand the changing facets of Cyber Threats and its impact on vital installations and businesses, deliberate on suggestions and recommendations to improve the current scenario and spur growth in the Cyber Security industry in India which has tremendous potential.

The Conference was inaugurated by the Guest of Honour Brig. M. U. Nair DACIDS, DIARA, Indian Army. The special address was delivered by Shri. R.K. Sudhanshu, Joint Secretary – Cyber Laws and E-Security, Department of Electronics and Information Technology (DeitY), Ministry of Communications and IT, Government of India.

Mr. Gopal Jiwarajka, President PHD Chamber in his welcome address said that in India there are 460 million internet users and with these many number of users there has been a rise in the cyber crime over past few years. He said that although Internet increases communication, it can also increase the incidence of cyber threats which is evident in the fact that India ranks fifth in online payment hacking.

Mr. Jiwarajka pointed out that Cyber Security has never been more important for Governments and businesses across the globe than it is today with detection and anticipation of cyber threats for key defence installations to corporate hacking attacks.

Mr. Jiwarajka expressed concern that there are plenty more security risks ahead as cyber criminals have become more sophisticated by carrying out large scale espionage attacks.

Adding further Mr. Jiwarajka said that with the exponential growth and sophisticated cyber-attacks carried out in the last few years, there is a huge demand for security solutions and services to protect the confidential data of the government, military, public data, Banking Financial Service and Insurance (BFSI), hospitals, and other businesses.
He also said cloud computing is also an important driver, which has grabbed the spotlight of the market thereby increasing the threat of data loss and data leakage. Mr. Jiwarajka however expressed concern about the cyber talent gap and lack of awareness about the dedicated solutions and attributed them as biggest challenges being faced by the industry.

Mr. Atul Anand, Co-Chairman, Committee on Electronics and ICT, PHD Chamber in his theme address of the Conference said with increasing number of online users, cyber security should also be updated so that there are minimum chances of cyber crime. He suggested that extensive usage of biometrics can help to reduce cyber crimes.

Mr. Anand said that Government of India has set up various organizations to reduce the cyber crime. Various testing labs and the National Threat Intelligence Centre has been set up to reduce the risk of cyber crimes and for evolving new strategies for cyber security, thus securing Digital India for socio- economic growth of the country.

He also said there should be security education and awareness programmes so as to educate people about internet hackers and how they can save themselves from it.

Mr. Atul Anand elaborated the challenges being faced in order to curb the Cyber threat menace and also said that the country is focused on e-commerce and information technology (IT) and needs to bolster Cyber Security infrastructure especially in the wake of Prime Minister’s Shri Narendra Modi’s pitch for ‘Digital India’.

In his Special Address in the Inaugural Session, Mr. R.K Sudhanshu, Joint Secretary – Cyber Laws and E- Security , Department of Electronics and IT (DeitY), Ministry of Communications and IT, Government of India said that the existing cyber laws have not been able to keep pace with cyber crimes reported in modern times and therefore require suitable amendments.

He also shared that the Department of Electronics and Information Technology (DeitY) is contemplating amendments to the existing Indian cyber laws to align them align with prevailing realities of modern times as well bringing about new encryption and privacy policies to cater to evolving cyber space.

He added that the DeitY is already engaged with this detailing exercise and might make amendments in the prevailing Cyber Act so that with fresh amendments Cyber Security can be made robust and effective.

Mr. R.K Sudhanshu also mentioned that there is a need for basic level education regarding cyber security at all levels of education system starting from schools as the usage of net and technology has started at early stages of childhood.

Dr. Claire Vishik, Security & Privacy Technology and Policy Director, Intel Corporation, United Kingdom (U.K.) during her address at the Inaugural session said that there are 50 billion connected devices around the world and it is important for the developer to know the intent of other developers, legacy integration etc.

She added that in order to have a secure cyber space, there should be innovative threat models, extensible framework and most importantly updated technology professionals.

Dr. Vishik mentioned that the users should have good knowledge of technology and must have security and privacy features installed in each of their devices to reduce Cyber Crime,

She also emphasised on the basic level technology and education and threats to the users.

Addressing the conference as the Guest of Honour Brig. M U Nair, DACIDS DIARA, Indian Army, felt that with new innovations that have taken place in Cyber and IT landscape, the sensitivities relating to data protection in the Indian Army, Air Force and Navy is becoming vulnerable and therefore, collective steps have to be taken so that the cyber space stays totally full proof and infallible.

Mr. Vivek Seigell, Director, Committee on Electronics and ICT, PHD Chamber emphasised on two key points while discussing the role of the industry and the Govt of starting an early education of the potential threats of using technology especially to the school going children as also looking at developing technologies which can work on potential threats

He further added that with the rise in Technology, Artificial Intelligence and Automation the requirement for protective mechanism will increase to gain confidence of the consumer.

Mr. Ashish Kishore from security division of Cisco Systems elaborated on changing facets of Cyber threats. He said there are 50 million connected devices in India which would increase to 500 billion by 2030. He mentioned that this is a result of our preference as an individual and as a citizen of the country.

Mr. Kishore said that consumers have become very demanding as they prefer hyper relevance over personalisation. He explained ‘Hyper Relevance’ which means that a person is ready to share all the information to the service provider to serve us better anywhere anytime which gives opportunity to the hacker or attackers to make their moves.

Mr. Kishore stated that the ‘Hacking’ economy is related to the thriving market of Digitisation and it is as big as 1 trillion dollar and added that every piece of personal information is saleable in the market from credit card info to Facebook ID is traded in the market.

He also elaborated on the hacker’s pyramid which consists of 3 layers. At the bottom of the pyramid are individuals who are petty thieves who just send spam mails, lottery mails etc. Second layer are the Resellers and Maintainers of the infrastructure who provide ransom ware as a service and anyone can take their service and run their own ransom ware campaign.

Last layer of the pyramid are the Technical Innovators which are most dangerous of the lot as they are no less than nation states who have all the resources available in the world at their disposal. Corporate spamage to political campaigns to cyber warfare are done by them.

Mr. Kishore concluded by saying that there is no single solution for the problem and only proper & sound network architecture can resolve the cyber security issue.

Mr. T.D Virwani, CISO & AGM, Punjab National Bank spoke about the Indian banking industry and how it has evolved manifolds in past few years owing to technological innovations.

He said as India was moving towards a paperless banking system driven by dependence on IT, has resulted into rise of internet based frauds, phishing, vishing and other malware attacks.

Mr. Virwani mentioned that banks are facing regular threats in form of Denial of services, DDOS, ransom ware etc and the frequency & impact of the attacks have increased manifolds in the recent past at the banks across the world.

He highlighted the need to develop a comprehensive cyber security programme which outlines with the right levels of governance, risk and compliance standards.

He also added that banks need to build capabilities to prevent and respond to cyber threats, reduce vulnerabilities and minimise damage from cyber incidents through a combination of institutional structures, people, processes, technology and cooperation.

Mr. Saket Modi, CEO, Lucideus spoke about the issues faced by the Cyber security start-ups in India. He said earlier cyber security was not on priority list for a CEO irrespective of the vertical, but with recent attacks it has become a top priority for the companies to secure their digital assets as all businesses are going digital to survive in this competitive market place.

He said start-ups in cyber security have their own issues like any other start-ups but the major issue they face is the capability of the procurement division of the client to understand technology competencies.

Mr. Sunil Gujral, CTO and President, Quatrro Technologies said that the security measures being undertaken today is no different from what we used to do many years back but the speed at which things are happening has changed.

Mr. Gujral mentioned the importance to have robust security infrastructure so that the entire network becomes difficult to breach.

He also spoke about the impact of cyber threats on BPO and KPO industry as they are highly vulnerable due to access to customer information as it is a business requirement of many processes.

Adding further Mr. Gujral said that since most of the damage is done by the insiders, it is very important to have a background check of every employee before hiring them to understand his intent and reason of leaving one company and joining another.

Mr. Vivek Seigell,Director,Electronics and ICT Committee, PHD Chamber concluded the proceeding by highlighting the fact that it is important to have a clear cut strategy for guarding against cyber threats for organisations and government for internal and external security which is backed by latest tools and techniques and a clear focus on the leakages whiuch can take place in the system.