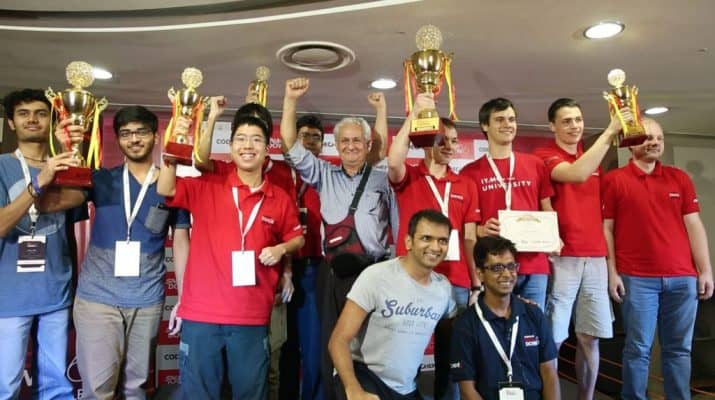 SnackDown 2016 opened to rave responses with over 13 thousand teams comprising of 17,238 participants from more than 1185 colleges and universities, 215 schools, and 653 organizations from over 90 countries participating in different rounds of the contest. The event turned out to be the largest ever ensemble of computer programmers from across the world, in India, under one roof.

The Delhi NCR region dominated in India in terms of number of participants, with Eastern and Southern regions coming in close second. Among the international participants, Russia, China, Japan, Belarus were the leaders in terms of performance.

Among other winners, the second position was secured by lya Zban and Belonogov Ivan also from ITMO University, Saint Petersburg, Russia. The second runner up slot was claimed by Ken Sugimori and Kohji Liu from University of Tokyo, Japan. The first and the second runner up won $5000 and $3000 respectively. The best team from India was from IIT Indore featuring Aditya Shah and Utkarsh Saxena who won $2000.

The other highlight of the finals was the one-member team of 16-year-old Arash Mahmoudian Bidgoli hailing from Atomic Energy High School, Iran. This high school student battling against the big guns from the programming world, solved seven out of the 12 problems and stood fifth. Arash also went on to emerge as the Best School Team, winning a cash award of $500. Among Indian schools, Rajat De and Sidhant Bansal of Delhi Public School, Dwarka led the table also being the third best Indian team in the competition.

Sharing their experience, the winners said: “It’s our first time in India, and the whole experience was very good. The problems were well crafted and challenging. We enjoyed the contest and the overall arrangement.” – Gennady Korotkevich and Borys Minaiev, the SnackDown champions.

Commenting on the overwhelming response, SnackDown 2016 received, Prof. Anand Shenoi, ACM ICPC Amritapuri Site Director said, “SnackDown is a great initiative to encourage the young programmers in India and around the world. In the past as well, CodeChef has contributed a lot to the programming community by organizing many such contests and bringing the top programmers of the world online, and together. I can see the enthusiasm and sharpness of the participants here, and I am really proud to be a part of the event.”

Bhavin Turakhia, CEO and Co-Founder of Directi concluded the event, saying, “I’m mind blown by the amazing talent we have over here. Over thirteen thousand teams from all across India and outside the country participated in the contest, out of which we flew down the top teams for the finale to declare the best programming team in the world. It’s an enriching experience to meet the finest coders of the world and interact with them. These are the best programming minds in the country and across the globe. I see in them, potential entrepreneurs, some amazing developers who are about to make some amazing products and change people’s lives. Undoubtedly, the future lies in their hands and I thank everyone for joining us. This was great.”

Right on the heels of SnackDown 2016, CodeChef also announced a three-day intensive programming camp at their Mumbai office in Directiplex – a first of its kind in India. It will be an extension of their goal to encourage them to excel at such competitions. Joining them, will be some eminent names from the programming world including Sergey Kulik, Kevin Charles Atienza and a few former ACM ICPC World Finalists from India. A panel of experts from programming fraternity has selected 22 students to be a part of this camp. The camp will touch upon advanced topics that will help these young programmers to move to the next level in the world of competitive programming.

Initiatives like SnackDown are a firm step towards bridging the gap between programmers from India and the rest of the world. We wish to see the competition getting bigger and better with every edition

The earlier the students start learning appropriate skills, the more effective they will become for…

One response to “CodeChef SnacksDown 2016: The final showdown of programming finds its winner”