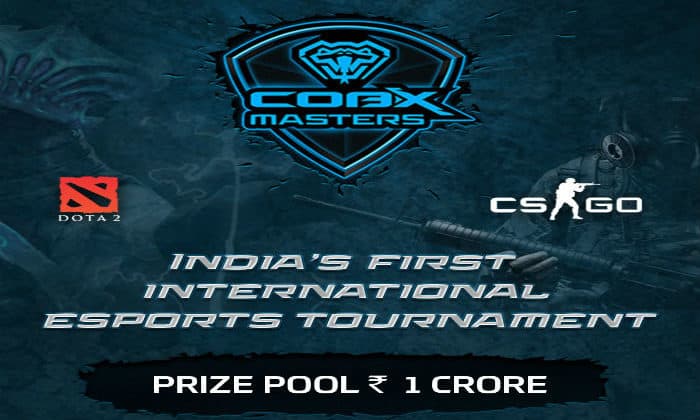 Cobx Gaming, the eSports company, announced the Cobx Masters 2018, at a media roundtable held at ITC Grand Central on 2/2/2018. Present on the occasion were Rajdip Gupta, Founder – Cobx Gaming & Mujahid Rupani, CEO – Cobx Gaming. Together they announced the 1st phase of the tournament. Cobx Masters 2018 is the first of its kind SEA gaming tournament to be held in India this year. With a unique format and a mammoth prize pool of INR 1 crore to be distributed over just 2 games, CS:GO and DOTA 2, it is going to be an exciting tournament for all participants.

The tournament is divided into two phases. The first phase will cover 10 cities in India, viz. Mumbai, Delhi, Chennai, Kolkata, Pune, Bengaluru, Hyderabad, Ahmedabad, Jaipur and Kohima. The online qualifier for each of these ten cities will be followed by a final stage, which will be held in a café in the respective city. The final stage will have the top 4 teams from the qualifiers, competing for the title in each of the cities.

Rajdip Gupta, Founder – Cobx Gaming said, “The primary objective of conducting the tournament is to attract the maximum number of professional teams in India. eSports is still in a nascent stage here and we want to help streamline it. We have designed the format carefully so as to address the long-standing viewership issue, ensuring the tournament reaches the maximum possible audience. We hope to demonstrate to this audience that gaming can be a lucrative career option, not just for young gamers, but also for talented individuals who are a part of this industry. This industry is populated with shout casters, game analysts, developers, designers and other promising talents, which we aim on identifying through our endeavor. This is a big-impact tournament that paves the way for the future of the industry in India.”

He further added, “The South East Asian circuit is huge, with over 900 mn gamers and an audience of 60 mn plus. When we founded COBX, it was to not just tap into this new market. It was also to give voice and a platform to thousands of talented gaming enthusiasts who wanted validity for their passion. We want them to know that what they’re doing can be a legitimate career, and we want to be the ones to empower them with resources to make it happen. With this tournament, we bring the best of the world to our shores. Our young lads will not just compete with them, but learn and improve their own game. We are taking the qualifiers to all four corners of India, ensuring we give a voice to the best teams we have.”

Said Mujahid Rupani, CEO – Cobx Gaming, “The tournament will bring to India, a global eSports tournament experience for the first time. With a major part of our tournament being held in gaming cafes across 10 Indian cities, the regional eSports scene is sure to get a huge boost. There are plans to have mainstream TV channels to air the tournament, taking it to millions of viewers. Along with mainstream media, we plan on using various streaming platforms and with the strategic use of social media and our website, it will be the most visible eSports tournament we’ve seen in India. It is India’s first major tournament crafted to help Indian players get great exposure to the international pro circuit. With the world’s eyes set on the tournament, we are affirmative that this will be a big moment for the eSports industry in both, India and South-East Asia.”

By 2020, the revenue from eSports is expected to cross a whopping USD 1.2 billion in SEA. In India, the game is fast gaining ground with youngsters. Collectively, there are more than 250 million active Indian gamers and has a viewership 30 million plus, which is fast increasing. With almost half of this audience in the under-25 age group, and divided equally between men and women, it offers a massive base for advertisers.