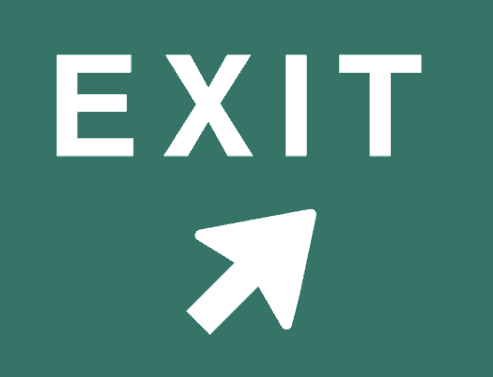 Networking major Cisco Systems is laying off  7% of its workforce- 5,500 employees-as part of a restructuring plan. This was revealed in the company’s Fourth Quarter and Fiscal Year 2016 Earnings Cisco announced yesterday. The company said, ” Today’s market requires Cisco and our customers to be decisive, move with greater speed and drive more innovation than we’ve seen in our history. Today, we announced a restructuring enabling us to optimize our cost base in lower growth areas of our portfolio and further invest in key priority areas such as security, IoT, collaboration, next generation data center and cloud. We expect to reinvest substantially all of the cost savings from these actions back into these businesses and will continue to aggressively invest to focus on our areas of future growth. The restructuring will eliminate up to 5,500 positions, representing approximately 7 percent of our global workforce, and we will take action under this plan beginning in the first quarter of fiscal 2017.” 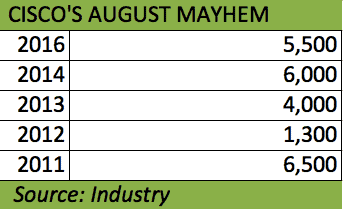 The August mayhem  at Cisco continues. Since 2011, Cisco’s layoff’s are taking a predictable pattern. Every August, with the exception of 2015, the company has downsized its workforce coinciding with its fiscal year closure.

As we look at the numbers for the year went by, for the whole year (FY16) the company made $48.7 billion, growth of 3% year over the previous fiscal. Per se Q4 FY 16, total revenue was $12.6 billion, up 2%, with product revenue up 1% and service revenue up 5%.  While Switching product revenue increased by 6% but Service Provider Video, NGN Routing and Data Center product revenue decreased by 12%, 6%, and 1%, respectively.

The layoffs clearly reflect the overall slow growth in the networking switches and routers market that will soon become legacy for companies like Cisco. But the larger point analysts point to is the transition Cisco is going through from a networking hardware to a software defined networking player focusing on high growth areas like Datacenter, Wireless and Cloud infrastructure business.

What does it mean? Does Cisco become a software company? Not really in entirety. As networks become agile and elastic with Software Defined Networking (SDN), companies like Cisco will look at ‘software defined hardware’ devices that will power Cloud and Datacenter infrastructures. For instance Cisco for a while is going bullish on its Application Centric Infrastructure (ACI), which is a next generation Cloud scale switches. This impending eventuality will shrink its traditional Router and Networking Switches business. So it makes more sense for the company to up its ante in SDN space and decrease its revenue dependence  on low margins traditional networking gear like Switches and Routers. According to Synergy Research Group , it said, “ Worldwide switching and router revenues approached $11 billion in Q4 CY 2015 and $41 billion for the full 2015 year. Total 2015 revenues were up 3% from 2014 with most of the growth coming from enterprise Ethernet switching. Enterprise Ethernet switching is also the largest of the three segments accounting for almost 60% of the total, followed by service provider routers and enterprise routers. In Q4 North America remained the biggest region accounting for well over 40% of worldwide revenues, followed by EMEA, APAC and Latin America. North America’s share of the worldwide market also increased by over half a percentage point from Q4 of the previous year. In Q4 some of the highest growth rates were seen in service provider routers in Latin America and enterprise routers in EMEA.”

But Cisco still is the king in this segment. Going by Synergy, it said that Cisco’s share of the total worldwide switching and router market was 56%, with shares in the individual segments ranging from 69% for enterprise routers to 42% for service provider routers. For the full year Cisco’s market share hovered around 56%.

“Despite challenges on a variety of fronts, Cisco is successfully maintaining its position as the dominant supplier of switching and router technology with revenues about seven times the size of its nearest rival,” said Jeremy Duke, Synergy Research Group’s founder.

But the key question is – how long?

Coming to the  layoffs, the company seems to be reinventing its business and in the bargain needs a completely new set of skill sets, and this down sizing might be just the tip of the iceberg in the making of the new software centric Cisco.