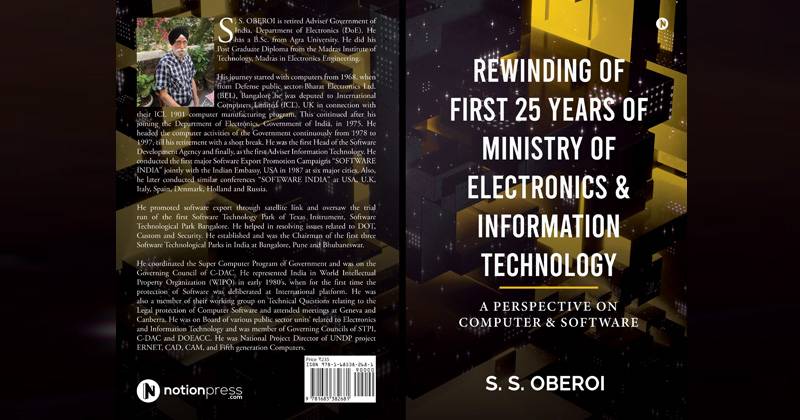 “Rewinding of First 25 years of Ministry of Electronics & Information Technology: A Perspective on Computer & Software”. This book written by S.S. Oberoi, Former Adviser, MeitY, was launched at an event organized by CyberMedia

Pradeep Gupta, Chairman, Cybermedia, welcomed the audience at the launch and the book said that it was the first of its kind, so far. Saurabh Srivastava, Chairman, Indian Angel Network, said Oberoi has been a great friend of the industry. Capturing 25 years in a succinct and efficient manner has been great. There used to be a photograph of a Swami sitting in front of a laptop. Software from India – myth or reality, was discussed in the past. Thereafter, we moved forward. Next, we had a World Bank report that told us we were Rs160 crore at that time. This established India could be a billion-dollar industry for the software one day. Oberoi has helped raise the image of India abroad. He encouraged Oberoi to write another book.

KV Ramani, Chancellor, Sai University, said he started his first initiative in the software industry way back in 1985. Oberoi had founded Software India to meet the objectives. There used to be a delegation of 15-20 people. There used to be smart talks about dealing with Indian companies. Presentation slides were not allowed to carry names of Indian companies in those days. US audiences felt there was some opportunity for software coming out of India. The biggest impact was creating awareness of the software India brand. We had to start from ground zero. We want to thank the Government of India for the start. We managed sales and converted to orders. We used to have an Indian pavilion in CeBIT, Comdex, etc. It was a huge success. The IT market has turned 180 degrees, thanks to people like Oberoi and others. We used to have 12 permissions for software and shipped them in floppy disks. STP has been born of that initiative. We had to overcome and build the India Inc. brand challenge.

The Indian IT industry has shown it can face any challenge. The kind of growth that we are witnessing today is very great.

Harish Mehta, Founder, Onward Technologies, said we had to prepare the constitution of NASSCOM. We looked at the vision of NASSCOM, and it also focused on building the ecosystem of software. The power of government officers was quite strong in the early days. The software was not even defined. Hardware rules were applied. There was a trust deficit between the industry and the government. We started building friendship and trust among each of us. Government officers were welcome to attend the meetings. When I was in a cab in the USA, the driver, an Indian, acknowledged the work that we had done. We created 25 million jobs in the country. Today, there are several developments in digital platforms, hardware, software, cyber security, led by Ajay Sawhney, MeitY Secretary.

Ashank Desai, Founder of Mastek, said that we have two generations of governments here. There is the story of Madras Institute of Technology, which played a role in the development of the software industry. That was the beginning. We showed faith in a non-existing industry in software. The government also showed faith in the industry. In the early days, someone had to drive the support for NASSCOM. The government helped us along the way. This book is an inspiration to new entrepreneurs. It also talks about our struggles. It showed that a government can make a difference.

Dr. Omkar Rai, former DG, STPI, said that this book has connected all the dots. He came across certain resolutions taken by the Department of Electronics. There were resolutions in 1984, 1986, and again in 1991. From Rs. 51 crores, the industry is today worth Rs. 5 lakh crore. There were STPI and Hardware Technology Park schemes that were given in a very industry-friendly manner. There were income-tax benefits given to the software industry. The Indian IT industry has shown it can face any challenge. The kind of growth that we are witnessing today is very great. Oberoi has done a great job with the book. Arvind Kumar, DG, STPI, was also present at the meeting.

Oberoi said the first conference on software was held in 1987. Thanks to IIT graduates like Pradeep Gupta, there was growth in software, and we all saw that Indians can do it. He narrated an incident where he had selected Nandan Nilekani, Saurabh Srivastava, etc., to speak at an event simply as Indians, and not representing their organizations. The government of India was also prepared to help the software industry. We have to support the software industry. We also had a shortage of foreign funds at that time. We wanted to get everything done for the software industry. This is what we need to work on, and develop. He narrated another incident when, at one time, there was news about Rs 20 lakh software being shipped, spearheaded by the one-man show, called the late FC Kohli. We were very clear that work had to be done by the government. History should not be forgotten.

Also, after he retired, Oberoi saw clouds over the past history. We had to clear them. He decided to write the book, where he remembered his old associates. He has tried to be honest in the book. There is no criticism and no judgment in the book, and only narration. MeitY Secretary Ajay Sawhneysupported Oberoi in his endeavor. He also thanked Pradeep Gupta for having the book published. Dr. B.M. Baveja, Ex-Group Coordinator & Director, MeitY made this book possible. He thanked all the friends that he spoke with while writing the book. He said: ‘This is the happiest day of my life.’

Gupta said that during the era the book talks about, Sawhney was a young IAS officer. Sawhney said Oberoi has done a remarkable job. It is wonderful to have the opportunity to hear about what we take for granted. Indians have really made a mark in the export of software services. Businesses have transformed that use the software services.

It takes a village to raise a child. So many people have contributed immensely. CAGR achieved in software exports as reported by STPI is Rs. 51 crores in 1987. Today, it is Rs. 5 lakh crores. That is 10,000 times growth in this period. It represents a CAGR of over 35 percent YoY for more than 30 years. This is very close to what we have seen and appreciated by Moore’s Law. The software industry in India is another depiction of Moore’s Law making this happen.

A lot of clouds hide the history from us. Oberoi has penned down what he has catalyzed in many senses. He played the role of sutradhar and also put raw materials in a cauldron and saw magic happen. The element of faith is absolutely paramount. Faith among software pioneers, the faith of NASSCOM pioneers, and the faith of the government, have all come together.

Oberoi has stitched it all together. There were many bold decisions taken. Various pieces of advice and help were taken from the different Secretaries over the years. It helped grow the entire ecosystem. It had immense maturity and wisdom. The amazing role Oberoi has played in making this happen, and sharing his thoughts with all of us is highly commendable.

Sawhney has seen many things happen. He encountered a lot of traffic in some of the streets and felt guilty about contributing to the traffic. We, the Indian software industry, have probably helped create traffic jams in Bangalore, Chennai, Hyderabad, Noida, Gurgaon, and many other places. Many of the stakeholders have taken massive steps in this journey. It has been an extraordinary journey by any stretch of the imagination.

What lies ahead? We have built a strong foundation in the software industry. We have a strong and mature industry association, NASSCOM. Software services are owned by us as a brand. We are now getting into software products. It is a new segment of the IT industry. The story that has unfolded before we are 40 unicorns in 50 weeks! No one can even compete with this. It is such an extraordinarily fertile ground. We have to grow these unicorns. The secret is our talent and the size of a billion-strong nation. Whatever we do well, is with all of Europe. We are well endowed and much better than all of Europe. Whatever we do, we are poised to break into the billion-dollar club.

We have also shown that we have made a comeback in electronics riding on manufacturing of mobile phones, etc. We grew 23% YoY compounded. We are expected to grow 27% YoY in the year ahead. Hardware is the vehicle that allows the software to do its magic. The hybrid space can give us a lot of strength.

The national public digital platforms are being unfolded today. Machines, platforms, and clouds are all interlinked. We have seen the growth of platforms, such as Google, Facebook, etc. We have also seen Aadhaar, UPI, etc., going in the same direction. We are now seeing Cowin do its magic. We are seeing the emergence of a nationwide health platform, national education platform, etc. We are also seeing platforms in other areas.

The element of faith is absolutely paramount. Faith among software pioneers, faith of NASSCOM pioneers, and faith of the government, have all come together.

This book talks about coming together in a structured way. Service providers of all kinds have come together in one ecosystem to innovate and continuously provide services. It is also the foundation platform for dozens of unicorns. We need to set our eyes on the next 10, 20, and even 30 years. We need to move forward with the same speed of urgency and continue to provide more traffic jams.

Dr. Baveja proposed a vote of thanks. He thanked Oberoi for his achievement in writing this book. He was lauded for consistently doing hard work to record the details for posterity.

The event was organized by CyberMedia and supported by MeitY, NASSCOM, STPI & Digital India.

Posted by: DQINDIA Online
View more posts
Chronicling Indian IT’s long and rich journey 0 out of 5 based on 0 ratings. 0 user reviews.
From Baseball to Banking–Data, a game-changer
The cliffhangers after crossing the telemedicine cliff