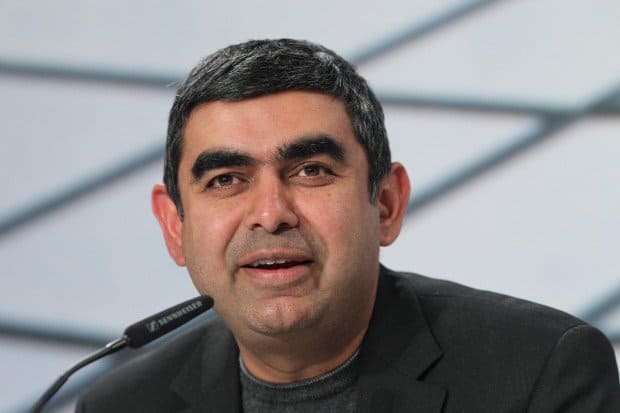 Infosys disappoints with its fy15 results, but tries to keep optimism alive with its ambitious target announcement of  hitting $20B  revenue by 2020? Will the  far-sighted CEO be able to pull it off?

When a technology wizard took on board as Infosys’s first non-founder CEO nine months back, he was handed over the herculean task to turnaround the slowing down IT company and bring it back on the growth track. Since then investors and stakeholders were curiously watching out each and every move of the iconic IT company under its new leader Vishal Sikka.

Now as the company is out with its Fy15 results, it seems to have invoked mixed reactions across the industry. The performance in the last quarter of FY 2014-15 doesn’t offer much to write home about, with quarterly revenues falling by 2.8% and YoY revenue also remaining on the lower end of the guidance. After all that anticipation, the financial performance has proved to be a dampener on investors’ confidence, which also reflected in the company’s stumbling stock prices.

The disappointing results might raise questions on the new leadership, but it can’t totally overshadow the fact that Sikka’s tenure so far has been one that fueled optimism in and around the Infosys ecosystem. “To start with, Sikka changed the whole management ladder and reporting. He started focusing on building new IPs and cloud offerings,” says, Rajeev Suman, Senior Analyst, Pierre Audoin Consultants (PAC), a global market research and strategic consulting firm for the software and IT services industry. Although it might take time for these decisions to pay off, industry experts and analysts have been quite optimistic that the new CEO is making the right noises and that under his leadership the company is heading in the right direction.

When he took over, Infosys had a lot of ground to cover. The revenues were lagging behind its close rivals like TCS and HCL. Attrition levels were soaring and there were many senior level exits in a span of few months. So regaining lost momentum was high priority. The main task for Sikka while taking the reins at Infosys was to revive investor and client confidence, that has been deteriorating over the past few years. His initial strategy was to strengthen the top management with strategic hiring, roping in top talents mainly from his previous company, SAP.

“The second priority has been to lead Infosys into the future through innovation and differentiated solution offerings, moving beyond the offshore labor paradigm,” says, Anupam Govil, Partner, Avasant. Sikka has been strongly advocating the need to move from traditional IT services to transformation deals involving automation and artificial intelligence.

He reinforced this view with the big ticket acquisition of automation company, Panaya earlier this year. “Sikka clearly showed what’s he is up to by acquiring Panaya. He has been a big fan of the automation of IT services and Artificial Intelligence and this acquisition proves the point. Additionally, Panaya gives Infosys a strong foothold in Israel,” says, Rajeev Suman, PAC Consultants.

His ‘renew and new’ strategy seems to be in line with the innovative vision and bold approach that he is trying to put forward. “Vishal clearly understands the need to shore up Infosys defenses and make up lost ground in the rapidly changing market by offering innovation led services. He has a dual pronged strategy to meet both immediate and long term needs,” adds, Govil.

From Conservative to Aggressive

It has been quite clear that under Sikka’s leadership the company has been aggressively seeking acquisition opportunities, ready to break away from its conservative stance. And it is not stopping with Panaya. The recent announcement of its acquisition of Kallidus, a digital and mobile commerce solutions company, for a whopping sum of about $120M (around Rs750Cr) underpins its push for new technologies. The Kallidus acquisition is considered to be a good move that can open up new revenue streams and accelerate growth in a slowing industry. Industry analysts point out that as the company is sitting on a huge pile of cash reserves and looking for inorganic growth, the possibility of new acquisitions can’t be ruled out.