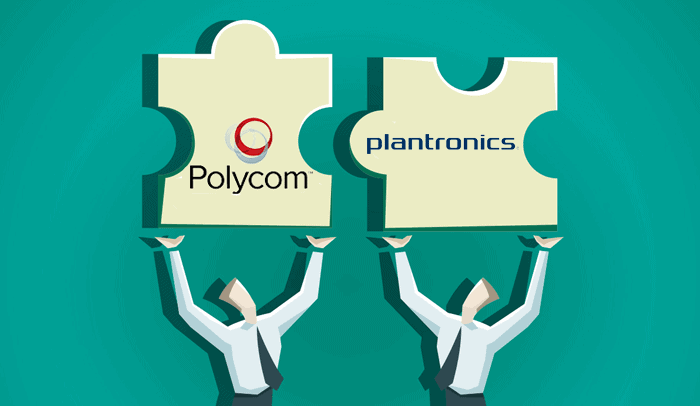 Marriages are made in heaven and often increasingly in the boardrooms. And while marriages of equals have been the norm, there are increasingly differentiated entities coming today. There are often instances in business history when we witness an entity punching above its weight. While it would be a fallacy to call it the ‘triumph of the underdog’, more appropriately even a smaller company acquiring a bigger entity often does make business sense. One recent case in hand is the news that Plantronics has reached a $2 billion deal to acquire Polycom. The deal is really transformative as Polycom is actually bigger than Plantronics.

Let’s first look into the financial arithmetic of this ‘apparently David conquering Goliath and hopefully living happily ever after’ deal. The deal is comprised of a combined $1.64 billion cash component and assumption of debt, while 6.35 million shares of Plantronics will be issued as well, being valued at $362 million. This equity stake gives investors in Polycom a combined 16% equity stake in the new company. The deal offers a quick pay for Siris Capital which paid $1.7 billion for Polycom back in 2016.

The goal behind the deal is essentially to offer customers better ways to collaborate and communicate with each other, making that ideas are seen and heard. Plantronics is traditionally strong in headsets, software, soundscaping and conference, while Polycom is strong in conference, desktop, video and services; a successful consummation of the marriage would make the combination offer services across the spectrum. Besides offering greater services to customers, the financial rationale is very important as well, with synergies seen at a rate of $75 million per annum, to be achieved within 12 months following closure of the deal.

Like any marriage this one too has been solemnized with a view that it would yield a host of business benefits to the new entity. Plantronics can gain the following key benefits from the acquisition:

Polycom is a leader in the open SIP desktop phone market, which continues to show growth, in spite of the widespread move away from hardware toward software communications and collaboration. Polycom has been shipping approximately 2 to 2.5 million open SIP endpoints every year for the last several years, with more than 60% of its shipment going into hosted/cloud-based telephony environments. While Plantronics has been doing a great job in the UCaaS space with professional headsets, Polycom’s broad and leading portfolio of open SIP desktop phones definitely enriches the Santa Cruz-based company’s overall value proposition, giving customers the option to choose the best devices — desktop phones and/or headsets — depending on their end users’ needs.

Gain a Leadership Position in the Audio Conference Endpoints Market

Polycom is an innovator and trailblazer in the tabletop audio conferencing endpoints space and has entrenched itself as the undisputed market-share leader. Marking its 25th year anniversary of providing conferencing and collaboration products, the company announced Polycom RealPresence Trio in October 2015, transforming the iconic three-point “starfish” audio conferencing phone into a smart modular collaboration hub.

Polycom has a strong position in the video conferencing endpoints and infrastructure market. During the last several years, the company has been considerably invigorating its video conferencing portfolio, launching new products to improve the user experience, strengthening its capabilities in video content management, and expanding its ecosystem of partnerships.

Future growth in the video conferencing realm will be driven by a stronger adoption of video in diverse meeting environments, with rapid adoption coming from the next-generation, low-priced devices used in huddle rooms and open meeting spaces. Globally, there are 30 million huddle rooms and less than 5% of those are video-enabled. Plantronics can definitely build on Polycom’s already robust video conferencing portfolio and its mission to enable ubiquitous video communications.

Enrich its Software-as-a-Service and Cloud Management Portfolio Both Plantronics and Polycom have been considerably enhancing their software management and monitoring capabilities for business endpoints. Endpoint deployment, management, and monitoring are becoming key factors in UC deployments, especially in cloud-based UCaaS environments. While Plantronics has already made important inroads in this space with its Plantronics Manager Pro intelligent software services, Polycom’s recent acquisition of Obihai’s cloud-based management and provisioning service can certainly add new technological elements to Plantronics’ mix, allowing the vendor to extend its monitoring and management capabilities to all types of business endpoints, and making Plantronics the vendor of choice for new endpoint services and solutions.

While Plantronics already possesses more than 15,750 partners across the globe, Polycom brings more distributors and resellers into the mix, expanding Plantronics’ reach internationally. Also, Polycom brings A/V contractors, solution advisors, and system integrators to the Plantronics’ existing partner mix, which is ideal for the expansion of Plantronics’ Habitat Soundscaping the company’s intelligent acoustic management service. Finally, the professional headset vendor will also benefit from Polycom’s strong presence in regions such as EMEA and APAC to better position its products against local leading brands.

Plantronics can certainly leverage Polycom’s prominent installed base of more than 400,000 companies and institutions to market its wide variety of professional headsets, including UC-enabled headsets, RJ9 headsets, wireless headsets (including Bluetooth and DECT), dual- and triple-connectivity headsets, and high-end noise-cancelling binaural stereo headsets. For businesses ready to move to a software-centric environment without a desktop phone, Plantronics will offer one of the largest product ranges of PC USB/UC-enabled headsets. For those that still prefer the desktop phone, Plantronics will now have the solid brand of innovative Polycom desktops, plus fully compatible RJ9 headsets.