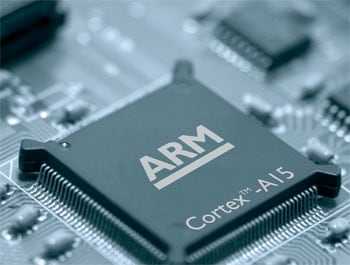 ARM is a dominant force in the world of smartphones and tablets, while Intel is a giant in the datacenter market. However, with the world increasingly moving towards energy-efficient datacenters,ARM has a big chance of changing its position using the same strengths that made it popular in the mobile space.

With its lower-power chip architecture, ARM believes it will appeal to an industry which is increasingly becoming energy conscious. ARM sees a big opportunity for itself in the microserver space, which is typically associated with low-end servers that serve static HTML, cache web objects, and/or function as slow storage servers.

This is perfect in the cloud world where densely-packed low-power CPUs can run multiple virtualized workloads that are tuned for efficiency and cost. Tasks can be running high-performance analytics,fetching, and putting data into databases or stream media. Each task which can be divided into light work loads and processed in parallel by thousands of processors is apt for an ARM processor.

WHY ARM HAS A BIG OPPORTUNITY NOW

Even when 64-bit ARM chips are being shipped in limited volume, there is definitely a growing pressure on Intel to make a wider variety of chips, often with customizations for large-scale buyers and with a plethora of performance bands, prices, and thermal characteristics. In contrary, the growth of ARM-based processors has shown considerable potential to mid-range compute through its innovation and energy efficiency.

ARM is drawing interest in servers for processing web tasks in a quick and power-efficient manner, especially as more and more data is now fed from mobile devices into datacenters.
With cloud, mobility, big data, and software defined everything rewriting the rules of IT in the datacenter space, ARM-based servers provide economic viability in terms of lower energy consumption and costs and it can be deployed for web-scale workloads and hyperscale environments.
“New age applications facing the Internet can take the advantage of the new form factor servers powered by ARM or similar X86 processor offerings. The change will be driven by how fast applications can take advantage of the architecture,” says AS Rajgopal, MD and CEO, NxtGen Datacenter.

ARM processors of today are powerful enough to compete against the traditional Intel X86 servers and at the same time can be a power saver. This is a huge boon for datacenters. However, the main challenge that comes with ARM-based processors is that of compatibility of the software to run on ARM. With several software developed and customized to run on x86, most developers have not really focused on the ARM architecture. The primary reason for it is due to the fact that majority of developers and partners like to focus on one standard platform instead of multiple platforms.

Server manufacturers are hence carefully viewing the opportunity in ARM-based servers. Opines Manish Gupta, Head ESG, Dell India, “Dell sees the benefits and gains that ARM can offer to the customers when it comes to performance, power efficiency, and cost and we support fostering that ecosystem. Ultimately, customer needs dictate what Dell offers and right now our mainstream server customers want versatility and robust software tools that x86 developers have long enjoyed.We anticipate the space to become increasingly competitive over the next few years and we will continue to stay engaged to best enable our customers and their evaluation of ARM systems.Bottom line: We will be ready when the customer demand is there.”

In the current scenario, ARM-based processors have limitations on the type of applications that can run on them and hence the choice for the customer is very limited.

However, that can quickly change as ARM is focused on developing the processors that find their way into enterprise datacenters. More recently, to help in addressing the needs of system builders in adopting ARMv8-A, ARM developed two new platform standards, with inputs from major Linux vendors and hardware partners to standardize server grade SoCs. Red Hat and Canonical are doing a lot of work to get the KVM hypervisor running properly on 64-bit ARM and Citrix Systems is also working to get the Xen hypervisor, which is the preferred virtualization platform on Linux-based public clouds.

A lot will depend, of course, on how well ARM chips perform, how widely available they are, and at what price. All of these are still largely variable at this point, which means everyone is still guessing. But having seen a client device take over the datacenter once before, we all know for certain that it can happen.

The question is: Can it happen again looking at the ever growing need of a scale-out-architecture in a modern datacenter? Until then, Intel’s X86 will continue to grab the larger market share.

Posted by: Prerna Sharma
View more posts
Tags:ARM Chips, ARM Server, datacenter
Can ARM Chip its Way in the Datacenter Market? 3.5 out of 5 based on 4 ratings. 4 user reviews.
Brocade investing in India as additional base for new IP innovations
VMware bets big on Indian R&D; team set to grow by 20% this year