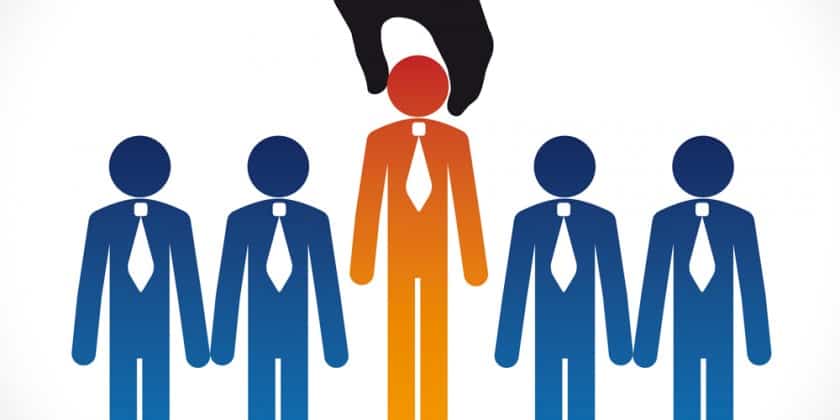 The Blockchain Technology is one of the most incredible innovations ever made. This is not an exaggeration when you look at the sheer number of potential use cases out there. It has genuine industry disrupting capabilities and nowhere is that more apparent than the hiring industry. One of the biggest problems that is plaguing the hiring industry is employee verification.

Verification Becomes a Big Problem for The Company

In an ideal world, it will make sense for a company to invest heavily in verification, however it becomes extremely impractical because of two things. Thorough verifications costs: Time and Money.

Verification isn’t a “one size fit all”, there are multiple checks that needs to be done as part of a single verification process.

All these add up and end up costing a lot of time and money. It can take weeks to properly verify one single employee!

“The lower you go in the value chain of institutions, the more difficult it becomes to do verification,” says Banerjee, “The better institutions can respond within 72 hours and in the worst case there won’t be any response at all unless you meet someone from there in person.”

The Blockchain is The Solution

So, what is the blockchain?

A blockchain is, in the simplest of terms, a time-stamped series of immutable record of data that is managed by cluster of computers not owned by any single entity. Each of these blocks of data (i.e. block) are secured and bound to each other using cryptographic principles (i.e. chain).

You might be thinking, there is no central authority here, how does it even work?

Suppose Alice owes Bob Rs. 100 and she wants to send it to him via the blockchain. The blockchain tracks the money and verifies it in real time. When Alice sends the money, the details are written down in an open ledger, which is distributed across many computers. Anyone can access the ledger and check every detail of the transactions which makes it impossible for anyone to forge anything.

Now, what is the application of the blockchain in the hiring space?

Issuing digital certificates on the blockchain can turn verification into an extremely simple process. Instead of going through several middlemen and hoops, one just needs to log into an app and check an individual’s records. Imagine the amount of time and money that can be saved using this.

The following diagram by Factor Daily shows the flow of this entire process: 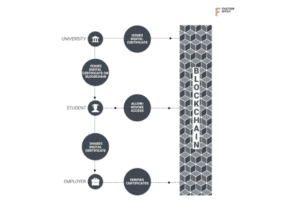 Apart from the speed and efficiency, another big reason why the blockchain is a desirable solution is the data security that it offers.

Blockchains are 100% tamper-proof, this means that data that has once entered its blocks can’t be changed. This property of the blockchain is called “immutability”. It happens because of cryptographic hash functions which are ingrained into the blockchain.

All the data inside the blocks are stored in the form of a “hash”. A hash function takes in an input of any size and gives out an alphanumeric string of a fixed length, this string is called a hash.

This hash has one extremely interesting property, if the input data is tampered with even a little bit, the hash changes dramatically.

Let’s do an experiment with the SHA 256 hash function.

You see that? Even though you just changed the case of the first alphabet of the input, look at how much that has affected the output hash.

Now, how is this relevant to the hiring space?

If anyone attempts to tamper with their certificates/degrees even a little bit, the hash of the certificate will change dramatically and the chain as a whole will reject the change.

Use Cases of the Blockchain in the Hiring Space

The Indian central government said that they are planning to use the blockchain technology in the digital certification of education degrees. This will be first used on a trial basis in IIT Bombay and certain colleges under Delhi University.

This will also be the first implementation of IndiaChain, the national blockchain. IndiaChain is going to connect the entire country and make different governmental processes efficient and non-corruptible.

We will need to see how they go about rectifying the educational verification problem to make more solid judgments. Regardless, this is definitely a step in the right direction. One can only hope that we keep on finding more innovating use cases of this revolutionary technology.

Posted by: DQINDIA Online
View more posts
Tags:blockchain technology, blockchain. hiring
Why The Blockchain is A Game Changer For The Hiring Industry 5 out of 5 based on 1 ratings. 1 user reviews.
Blockchain- A New Solution to Unemployment in India
Cashless In-Store Payments and the Transformation of the Indian Retail Industry