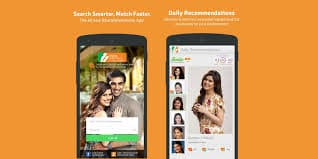 In order to capitalize on the growing language users online and expand its reach, BharatMatrimony, India’s largest and most trusted online matrimony service, has launched a vernacular version of the mobile app in eight languages including Hindi, Tamil, Telugu, Malayalam, Bengali, Kannada, Marathi and Gujarati.

The Indian language internet user base is expected to grow to 536 M by 2021 as per a KPMG-Google report in 2017. Hindi, Marathi, Bengali, Tamil, Kannada and Telugu are among the largest language users on internet in India. Internet penetration in tier 2 and 3, low data costs and falling smartphone prices are helping drive more vernacular users online.

Riding this trend, BharatMatrimony is the first to offer vernacular lite apps in multiple regional languages. Now users can select the language of their choice while registering their profile. Language selection helps them get notifications and updates in the vernacular languages. The regional sites will have respective language options like Marathi in MarathiMatrimony and Bengali in BengaliMatrimony.

A significant feature of the app is that users can register a profile without a mail id and with just a mobile number. The vernacular android app lite version weighing less than 1 MB loads in 3 seconds and works well on even basic android phones. It offers optimized and seamless experience and speed even on 2G networks.

The lite app was made keeping in mind the language user’s limited phone space & data plans and internet network constraints. The regional lite apps offer classic features like inbox, profiles and daily recommendations in a compact size. Users of the lite app will be able to chat with prospects and send personalized messages.

Speaking on the launch of the vernacular app in 8 languages, Murugavel Janakiraman, Founder and CEO – Matrimony.com, states, “While the English speaking audience in India is about 175 M, the number of language users is larger at 234 M and is expected to touch 536 M by 2021 and therefore a big opportunity for us. By offering users the option of their native language, we’re looking to ride the next wave of growth.”